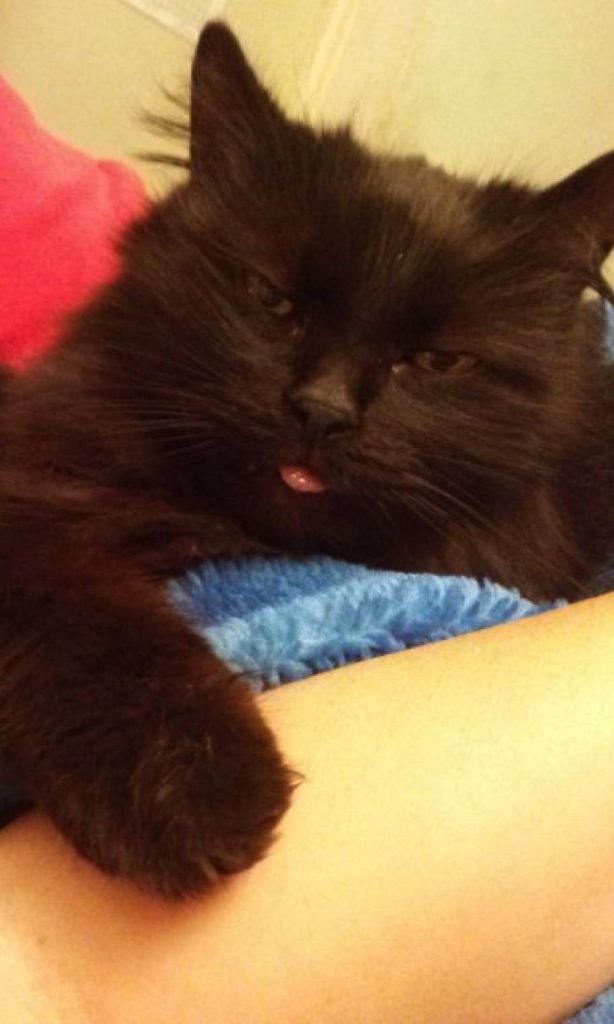 What are *you* looking at?

I used to get the strangest sense of being watched, just be soaking in the hot tub and sense quiet, judgmental, unfeeling eyes upon me. Soon I’d notice the slightest shift in the shadows, and suddenly, nothing. Then, Arizona experienced a colder than average winter and this scrawny, long-haired stray started sneaking in through the existing cat door and hanging out in a hole in the drywall.

Three days later he came in cradling a cuddly, fluffy, purring ball of darkness and dropped it on my chest. And it never left. It is literally staring malevolently at me right now, as I write this.

We call her Lupin, after the comical cat burglar in Miyazaki’s Castle of Cagliostro. Sometimes she even answers to that name. But mostly she does her own terrible things, without regard to her benefactors’ feelings. For example: she enjoys climbing into a hole in the ceiling (we have a lot of construction going on), rolling around in the pink fiberglass insulation, and then rolling around on my husband’s side of the bed, because if there’s one thing a man needs, it’s tiny little shards of glass embedded directly in his tender flesh while he sleeps. She’s also the queen of lying in your arms and purring while you pet her and then slashing your flesh open with her claws for no reason whatsoever and then getting annoyed that you’ve stopped petting her.

Deer mice are the major carriers of hantavirus. This one was mutilated by my cat and caught in my front hall by my husband, who assumed that when I said, “Get rid of it,” that meant, “Put it in a container I use to store food and then demand I photograph it.”

But Lupin is an equal opportunity mutilator of wildlife. Having long ago determined that I must be the most terrible hunter on the planet, never providing her with fresh meat, she has done her utmost to encourage the development of my hunting skills by disabling practice creatures for me. Here are the different types of animals whose backs she has broken before depositing on the altar of the hall outside my bedroom:

I disappoint her by never killing or eating her gifts.

Some people might say, “Well, why don’t you keep her inside?” To which I reply, “You try confining this creature indoors.” They say cats are only partially domesticated, and this cat is even less domesticated than that. She likes that I have control over the local climate (although she seems to believe I have control over the general climate, too, and complains fiercely to me about the summer heat and the monsoon rain), and she likes lying on soft things, and she likes this particular brand of cat treat I give her, and she likes being brushed (it’s especially important, because her hair is very long, and she’s apparently not the kind of cat who ever deigns to groom herself) and cuddled, but she also likes heeding the call of the wild, and, as I said, I like sleeping in. I’m not going to fight with a cat who lived outside for the first two years of her life about whether or not she’s responsible enough to go out at dawn to hunt the early mice.

It’s getting hard to write this, because she decided that a good place to take a nap would be on top of my hands as I wrote.

There’s no point in doing anything. She might actually just be a very intelligent feral cat and I think she likes the attention she gets when she upsets humans. When my stepkids were little, she used to hide under their bunk beds while they brushed their teeth, wait for them to almost fall asleep, and then jump directly on my stepson’s face. That was a fun game. She also enjoys the exciting pastime of knocking important things off shelves. Doesn’t matter if it’s a $900 camera or a souvenir mug or an heirloom figurine that’s the only item you inherited from your grandmother’s estate. She will knock that stuff off a shelf like a pro.

Lupin and I are very happy together.

This is not to say that Lupin has no redeeming qualities. She does keep the house relatively free of vermin, except for the vermin that she brings into the house herself. She is very soft and pretty, except when she’s filthy and has her fur matted up and full of seeds and other pointy pieces of nature. And she has the rare quality of enjoying having her long-haired belly rubbed, except when you do it wrong and she points the problem out by slicing your wrist open with her claws. Those are her three redeeming qualities.

Some people say that cat owners all have toxoplasmosis and we’re being controlled by microorganisms that somehow direct us to love our feline companions. But that’s all bunkum and malarkey. This cat is great. Amazing. Wonderful. All hail our kitty overlords.