In 1959, seven years before the publication of his breakthrough book Hell’s Angels: The Strange and Terrible Saga of the Outlaw Motorcycle Gangs, Thompson sat down and wrote Faulkner a letter. The letter displays the beginnings of the writing style that later would develop into “gonzo” and gives insight into the workings of the off-kilter intellect of the highly intelligent Thompson. The letter is intended as an expression of appreciation and admiration. But no one gives a compliment quite the way Thompson did. 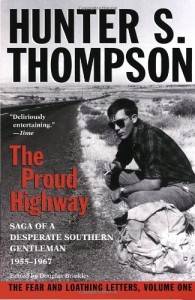 Throughout his entire life, Thompson was a prolific writer of personal letters. He wrote them on his typewriter, making a carbon copy of each and every one of them. When he died in 2005, he left behind approximately 20,000 letters. Some of these letters have been published. The letter to Faulkner can be found in The Proud Highway. Saga of a Desperate Southern Gentleman 1955–1967.

Written on March 30, 1959, while staying in a cabin in the Catskill Mountains, Thompson starts off his letter by referring to an article he is enclosing in the envelope. The article recalled a statement made by Faulkner in something he believes was called Writers at Work. He admits that he does not he have the book with him at the time of writing, and neither does he remember exactly what it was that Faulkner said. It had something to do with “the writer as a fine dog.” Regardless of the exact wording, he writes to Faulkner to tell him that he disagrees. He says that the role of the writer today is to “starve to death as honorably and as defiantly as possible.” Which is exactly what Thompson intends to do.

And if this letter by any chance would make Faulkner inclined to send Thompson a check on a weekly basis, he is most welcome to do so. Money is short and most of it is going to pay for gas for the Jaguar that he is currently driving.

Later in the letter Thompson claims that his suggestion about a check was made in jest. However, money is a recurring theme throughout his correspondence. He was constantly in need of funds, and he was always chasing a deadline. Heading to the Caribbean and Latin America in 1962, he arrives in Aruba with only $30, before heading to Columbia where he expects to arrive with only $5 and no prospects of any immediate income.

In his letter to Faulkner, Thompson extends an invitation for the author to come visit him in his Catskill cabin. There are chicken coops to raid and a trout stream right outside the door. He has several spare beds, but the cabin doesn’t heat up properly in the winter and the kitchen cupboards are empty. “An excellent place, all in all,” he states before signing off with the following salute, “And so, until we all dissolve in a blaze of radioactive newsprint, I remain, very sincerely: Hunter S. Thompson.”

Thompson sent his letter to Faulkner’s home in Oxford, Mississippi, but never received a reply. There could be a couple of reasons for this. One reason could be that when Thompson’s letter arrived at Rowan Oak, Faulkner was not there. On March 14, he fell with his horse during the Farmington Hunter Trials in Virginia. He broke his collarbone and, true to form, self-medicated his pain with alcohol. He returned to Oxford on April 6, from where he wrote a letter to his editor stating that he was “at home again, still sore but sober.”