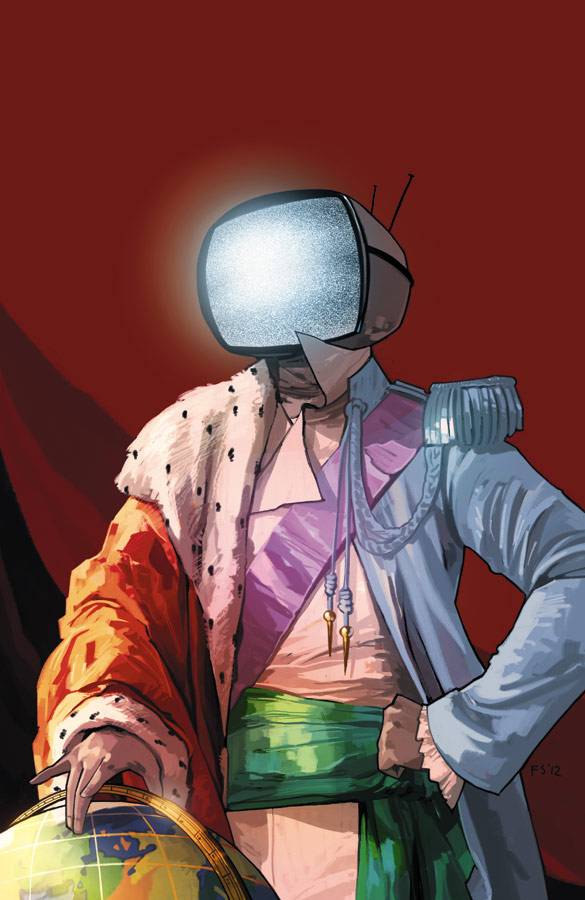 Over the past few years, Saga, the ongoing space opera by Brian K. Vaughan, Fiona Staples, and letterer Fonografiks, has been both a gateway comic for new readers and a touchstone for longtime comics fans. Right now, whether we’re reading in single issues  or waiting in between trades, Saga-lovers linger in a sadly Saga-less state. So you’ve read and reread all your issues, combed the letter columns for secret messages, and taught your kitty to pose like Lying Cat. What next?

If you’re a Saga fan, you probably already know about Y The Last Man, Vaughan’s reputation-making collaboration with Pia Guerra, and his fan favorite work with Adrian Alphona and Takeshi Miyazawa on Marvel’s Runaways. You could also check out Private Eye, the ground-breaking digital-first comic created with Marcos Martin, which is available pay-as-you-will through Panel Syndicate, or the new series We Stand on Guard, with artist Steve Skroce.

But don’t just fill up on Vaughan! Earlier this year, DC re-released a paperback of 2010’s North 40 (Aaron Williams, Fiona Staples, Rob Leigh), the rural horror comic that helped Staples make her name. No artist out there is creating images that are simultaneously as beautiful and as horrifyingly gross as the ones that come from the mind and pen of Fiona Staples. In North 40 look for an early iteration of the art that makes Saga so memorable.

2. Meet a heroine Hazel would totally relate to.

Saga begins with the birth of Hazel, the daughter of intergalactic fugitives Alana and Marko. Hazel narrates the adventures of her parents from some unspecified future. Readers don’t know what grown-up Hazel’s life will be like, yet, but if I were going to introduce her to any fictional character, it would be Kate Kristopher.

In Shutter (Joe Keatinge, Leila Del Duca, Owen Giene, and Ed Brisson) (Image) Kate is the grownup daughter of a world-famous explorer. When she was seven, her dad took her to the moon. When she turns twenty-seven, the past starts to catch up with her.

Shutter takes place (mostly) on earth, but it’s an earth populated by talking animals, tentacle-monsters, and clockwork people, where the nightly news reports on the doings of elder gods. Hazel would feel right at home, and she could bond with Kate over the joy and trauma of growing up as the child of unique parents. Two collected volumes of Shutter are out so far, with more adventures to come.

3. Read a complete series full of true love and disgusting images you’ll never get out of your head.

One nice way to pass the time during a hiatus is to find a long-form work that is already complete. No waiting for the next chapter! And there’s not a more satisfying serial in English-language comics than Preacher (Garth Ennis, Steve Dillon, Matt Hollingsworth, Clem Robins, Glenn Fabry).

If you only know a little about Preacher, the Western-themed theological horror story might not seem like a natural companion to Saga‘s space opera sensibility. But if you strip them down to fundamentals, both tell classic road trip narratives. Also, while Steve Dillon and Fiona Staples have very different visual styles, they are both masters of — and I mean this in the best possible way — the startling grossout image. Most important, though, both of these comics are love stories. Marko and Alana’s marriage provides the emotional engine that drives Saga, while Preacher tells the love story of Jesse Custer and Tulip O’Hare, who are bound together until the end of the world.

4. Read a family saga about culture clashes and the consequences of war.

If you’re hooked on Saga for its serialized narrative and its far out world-building ideas, here’s another avenue to explore: shounen manga. This is the “boys'” brand of Japanese comics (though widely read and often created by women), where political struggles and family conflict happen right along with out-there fight scenes and melodramatic ethical dilemmas. I’m going to recommend my favorite manga series, Fullmetal Alchemist (Writer/artist Hiromu Arakawa).

The story begins with two young brothers who meddle with forces beyond their control (trying to bring their mother back from the dead, who knew that would go badly?) and set off on a quest to set things right. Along the way, they get drawn into the politics of their extremely problematic imperialist country. FMA‘s wars, like those in Saga, bear uncanny echoes of the conflicts in our own world. Fantasy can be the escape that circles back around to where we really live, and that’s something I love about both of these comics.

5. Launch off into space.

At its most basic level, Saga is an awesome space adventure. Fortunately, we are living in such a Golden Age of space comics that Panelteer Jenn published a detailed guide to them just the other day. So check out any of those for comics on the Final Frontier.

If you’re looking for something a bit more old-school, Panelteer Paul passed on a recommendation for Mobile Suit Gundam: The Origin. An adaptation of the cartoon that began in 1979 — and launched a thousand giant robot franchises — this comic was written by Yoshikazu Yasuhiko and translated into English by Melissa Tanaka. It’s full of romance, politics, war, and melorama– also, did we mention, giant robots? If Gundam wasn’t a direct influence on Vaughan and Staples’ work, it at least helped establish a lot of the tropes that Saga is exploring and exploding.