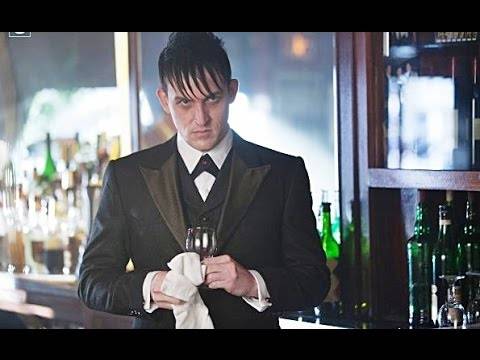 On our last visit to Gotham, the Falcone and Maroni crime families came together for the most interesting corrupt development deal since Chinatown (unfortunately, still not very interesting); Jim Gordon and Barbara Keane split up because Jim doesn’t understand how bisexuality works;  Gordon and Bullock once again killed a suspect instead of arresting him; and Fish Mooney began her mission to weaponize a lounge singer.

How are things in Gotham this week? Have any of these people gotten better at their jobs/ their relationships/behaving like plausible human beings? Let’s find out!

Alfred and Bruce are really interested in their storyline, for some reason

We open in Wayne Manor, where Bruce is pasting up his first (but certainly not his last) murder-investigation wall. Like most twelve-year-olds, Bruce is obsessed with corrupt land deals, to the point that even Alfred is worried about his mental health. “I don’t want revenge,” Master Bruce assures his butler/guardian. “I want to understand how Gotham works.” Bruce speaks for us all.

Meanwhile, in the festering heart of the city, a creepy bearded guy hands a busker a glowing green vial labeled “Breathe Me.” Like any good moron, the busker opens it and inhales a concoction of luminous smoke, which induces (1) superstrength (2) a powerful craving for milk and (3) spouting dialogue like, “Don’t vex me, mortal” before pulling an ATM out of the wall with his bare hands.

Next, we flash to the street where Harvey Bullock is ranting about hamburgers, while Jim Gordon looks on with the kind of exasperated affection that your Panels recappers have toward Gotham itself. Gordon sees Selina Kyle picking a pocket, and he races after her in desperate hope of catching an interesting B-plot for this episode.

But it’s not to be. Selina disappears without a trace, but Jim and Harvey stumble into the store from which our busker stole the ATM. Bullock makes the very reasonable point that they are homicide cops and should not be investigating a simple robbery, but nobody ever mentions that again. “It’s not that we don’t notice these discrepancies,” Gotham is telling us. “We just don’t care.”

Over in villain land, Fish Mooney takes a break from teaching her weaponized lounge singer to hum along with opera music for long enough to meet up with Carmine Falcone and his lieutenants. The nonspecifically foreign Nikolai tries to mix it up with Fish, snarking that in his country, women are limited to the kitchen or the bedroom, “depending on their talents.” Fish sizes Nikolai up and, in what might be Gotham’s first really good line in five episodes, sniffs, “I bet your mother was a lousy cook.”

Elsewhere, Bullock and Gordon track down the still-crazed busker in a nest of discarded milk cartons. (Sidenote: Still-Crazed Busker is my new noise metal band). SCB alternates between begging for help and trying to throw an ATM at them, but then his superstrength gives way and the ATM crushes him.

Back at the station, Lieutenant Essen tells the detectives that the drug is called Viper, and that it grants a brief period of super strength, followed by certain death. (Were all of the victims holding heavy object aloft when their powers gave out? Because that’s what seemed to kill SCB).  Somebody raises a doubt that an easily-identifiable drug with a 100 percent fatality rate is likely to start a craze. But Gordon insists some people will take it anyway, and since this show is set in Nonsense Land, he appears to be right.

A brief detour in the investigation occurs when Gordon is kidnapped by the Maronis. They force Gordon to vouch for Oswald Cobblepot, which he accomplishes by explaining the plot of the pilot episode. This satisfies the gangsters, and Cobblepot — now resigned to letting mafiosi and recappers call him “Penguin” — goes back to faking his death by working the front of the house at a popular restaurant. Gordon returns to the station and explains his absence by claiming Barbara — who he broke up with last week because he felt she wasn’t trustworthy — is having personal problems.

But before we can dig too deeply into Gordon’s character flaws, he and Bullock have to foil the Viper dealer’s plan to poison everybody — including young Bruce and Alfred — at a Wayne Industry charity event. For once, the cops manage not to murder the suspect, though only because he kills himself first. Before he dies, they learn he acted in revenge for Wayne Industries developing pharmacological weapons. This project was shut down by the benevolent Thomas and Martha Wayne (rather than, say, the United Nations), but the current less ethical management seems willing to work on such dastardly projects.

These suspicious characters include Mathis, a middle manager who seems to think she’s pulling one over on Bruce, which suggests  she hasn’t read enough Encyclopedia Brown. At the end, Bruce is grinning; he must be on to something. Gordon and Bullock aren’t so lucky. They go to a warehouse the Viper dealer mentioned before he died, and it’s empty. Better luck next week!

In the episode’s coda, we see Fish’s plan coming together. Nikolai, who she pretended to hate, is her lover, and she’s backing his play to overthrow Falcone. Or so she says. As we fade out, the weaponized lounge singer comes across Don Falcone in the park. It turns out he’s a huge fan of opera. They start to talk and, goodness, they have so much in common. . .

What do you think of this week’s mysteries and breakthroughs? Is Bruce on the right track, or is Gordon? What will Fish Mooney do next? Will we ever see Selina Kyle again? Use the comments to let us know what you think.