On Monday night, Bookish.com made its internet debut. A collaborative project of three of the Big Six publishers but with titles from a host of publishers, Bookish is publishing’s attempt to take some control over online book-buying. It’s actually a little more interesting than just another place to buy books on the internet and worth looking at a little more closely.

If there’s one thing I especially like about Bookish, it’s that it looks like a modern website. Compared to Amazon and Barnes & Noble, the simple color selections, oversize headers, large book covers, and generally uncluttered page layout make Bookish feel designed, not just assembled. 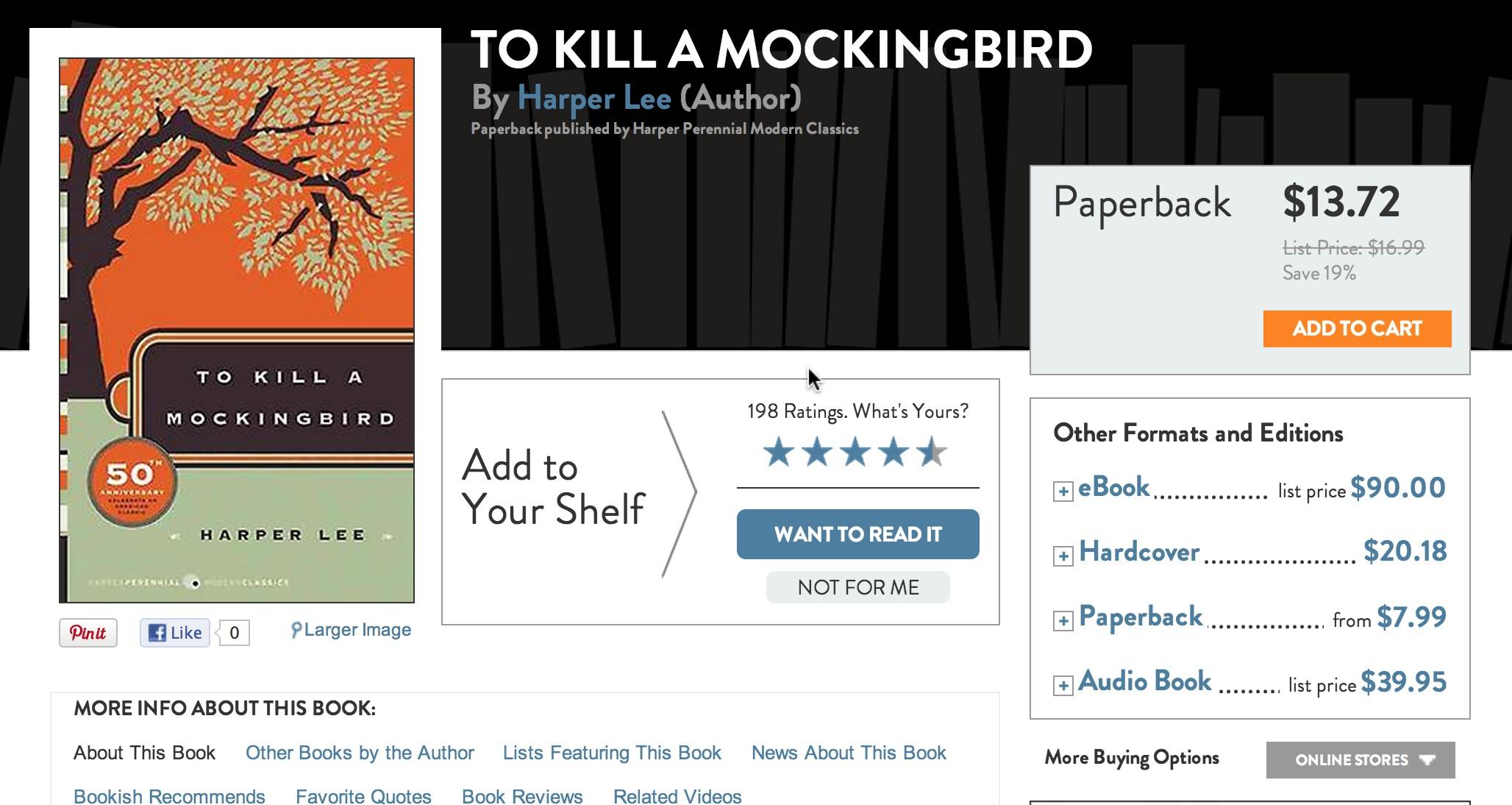 While Bookish says that customers have the option to buy books through other retailers on the site, including Amazon, Barnes & Noble, and independent bookstores, in my tests it wasn’t clear where this selection was (I stopped short of clicking the final “Place My Order” buttons in run-through of the process with a paperback of To Kill a Mockingbird and an ebook of Gone Girl). In general, the buying process is no easier or more difficult than at other sites.

One area that Bookish is supposed to be noticeably different than other retail sites is in recommendations. A combination of improved metadata, homegrown recommendation engine, and a dash of direct editorial intervention is intended to improve over the largely unhelpful auto-generated reviews on Amazon or Goodreads. In my trial runs with To Kill a Mockingbird and Gone Girl, Bookish generated pretty interesting results that do indeed seem a cut above what I have come to expect from book recommendation engines. As Bookish gathers more data from customers and adds more metadata about more titles, this seems likely to improve further still.

Bookish pulls reader reviews from LibraryThing (an Amazon property), and these are separated from critic reviews, which seem at this point only to come from Publishers Weekly.

Bookish has an editorial staff to write, contract, and otherwise provide editorial content to supplement the site’s core mission to sell books. Elizabeth Gilbert’s response to Philip Roth was a provocative piece to have at launch, and Bookish’s connections to the major publishers and their stables of big name authors might offer it some ability to differentiate itself.

Bookish relies on Facebook for its social component, though it’s easy enough to disable it from having much access to your Facebook profile. I would imagine that readers interested enough to integrate their reading lives with a social media network have already made their choices, so I can understand why Bookish isn’t pushing these features just yet.

Bookish is an attractive online bookstore with an above-average recommendation engine and the promise of compelling supporting editorial content. I think many book buyers will prefer the experience of browsing Bookish to Amazon or Barnes & Noble, but I’m not sure that is enough to change readers’ buying habits.

To launch an online bookstore at this point, you can’t just be a bit better in a few areas; you have to be significantly better in most areas. Bookish is a logical response to a problem publishing has (a lack of influence on retail channels) but isn’t a compelling response to some fundamental customer problems. Amazon offers low prices and easy availability. GoodReads offers social interaction and tracking.  While Bookish gives publishers a clean, outlet-neutral landing page for individual books, what does it really offer readers that they don’t already have?

Bookish, and publishing in general, seems to think that “discoverability” is a problem for readers–that readers have a hard time finding books that interest them. But I’m not sure that’s a problem that readers, the ones who currently buy books at least, actually feel. In my experience, most readers have more than enough books on their radars and to-be-read piles. (In fact, I think many readers, this one included, would be interested in an online bookstore that does more with fewer titles.)

In short, publishing has a great reason to make Bookish, but readers don’t have a great reason to use it. It will take a significant, sustained push from publishing (and not just those backing Bookish) and traditionally published authors for Bookish to thrive. And while I’m not sure it’ll happen, I think it’s a project that publishing had to try.