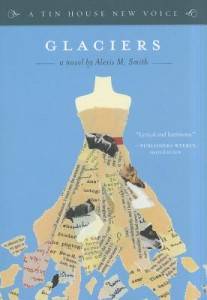 In his contribution to BookRiot’s Best Books of 2012, David Abrams chose Glaciers by Alexis Smith, describing it as a “slim, swift novel which chronicles one day in the life of Isabel, a twenty-eight-year-old library worker, as she repairs damaged books, prepares for a party, and pines for a co-worker, an Iraq War veteran named ‘Spoke.'” This young library worker lives in Portland, OR, and she was born there, but she spent most of her childhood in Alaska. One side of Glaciers could read as the story of a contemporary Portland hipster, the novel actually spends much of its time inside Isabel’s head, where she dreams of other worlds entirely.

Sometimes this dreaming is of her own childhood and family history. She was too young to remember the trip back to Alaska when she was a baby, but she imagines it: “The family from Seattle was crowded with other families, not Alaskan families but the kind of loose-minded travelers who pointed and photographed without really seeing. …North of Juneau, the boat lingered near some rocks. …Isabel’s family sat in the commissary during the viewing of the Princess Sophia [a shipwreck], eating sandwiches with no lettuce.”

This vision is built on “only a few grainy photographs [that] remain to tell the tale,” but she pictures the steamboat trip followed by “long hours on land in a car,” and their move into Isabel’s great-grandmother’s homestead. Isabel floats between working at the library (where she is, notably, a restorer), shopping at vintage stores (for anything and everything that provokes her special nostalgia), and dreaming of things past (whether her own stories or those of others). A postcard mailed decades before from Amsterdam to someone she’s never met is enough for her to spin a whole history around to add to her life of memories, real and conjured. 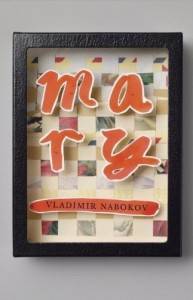 Smith’s focus on memory throughout Glaciers is, forgive the pun, reminiscent of another writer’s repeated returns to memory and nostalgia as major themes—as well as dreams and their relation to memory, also frequent in Glaciers. Vladimir Nabokov’s first novel, Mary, little-read compared to his later (and greater) works, highlights these themes in particular.

The story is of a young Russian man, exiled to Berlin. Lev Ganin lives in a boarding-house there with others in the Russian expat community, where he and many of the others spend much of their time remembering the home country and life before the revolution there. The nostalgia can be crushing—especially after Ganin finds out that an ex-lover is due at the boarding-house any day now, to meet her husband, a buffoon already living there. He is crushed, at least, and immediately driven into the world in his head.

She used a cheap, sweet perfume called “Tagore.” Ganin now tried to recapture that scent again, mixed with the fresh smells of the autumnal park, but, as we know, memory can restore to life everything except smell,s although nothing revives the past so completely as a smell that was once associated with it.

In many other ways the two works could not be more different. Their styles are probably their greatest differentiator; Nabokov is, simply, Nabokov, while Smith writes in a plain, clear style, free of verbal curlicues and alleration gone wild. Glaciers is also placed firmly in the present day, with its references to the Iraq War, while Mary is (similarly) stuck in its (different) time period, tied to history by the importance of the Russian Revolution to the lives of each character. And though both books involve love affairs, their courses and outcomes are their own. Mary is, however, similarly “slim,” if perhaps not “swift.”

But the “vintage” fascination is there and unmistakable in both books. Don’t mistake Isabel for a frivolous woman shopping for cheap irony—her infection with nostalgia puts her sincerely outside her own era. As does Ganin’s continued reversion to the past—especially to a past he knows cannot possibly be returned to. And at the end of both novels, both characters seem to reach the same conclusion about their life of memories and the life of the present.