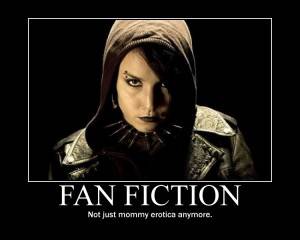 I’m not sure which is more responsible for the popularity of Fifty Shades of Grey: The fact that it’s naughty, or the fact that it started out as Twilight fan fiction. Probably the former. But it’s the latter that actually puts reading those novels only slightly above the male Brazilian wax on my list of “things I might do if I’m really, really bored.”

And but so, especially in light of the spat of successful monster-classics mash-ups, the stigma associated with fan fiction among “serious readers” (ugh!) is at an all-time high. I’d contend, however, that there could actually be much fun to be had with fan fiction. Here are five I’d love to read.

5. The Boy from The Road and Pi from Life of Pi compete in a Hunger Games-like game show/contest in which they must dream up and participate in their own increasingly sophisticated metaphors to describe the soullessness of the world. Their “sponsors,” fictional representatives of the real-life McCarthy and Martel, can only help them in single-syllable utterances. The winner gets to graduate to the Metaphor-Free Zone, and is showered with Stephen King novels. Do you agree to these terms? “Okay,” says The Boy.

4. Speaking of Stephen King, Jake from 11/22/63 goes back in time to the late ’90s, where he becomes the hilariously mismatched house guest of Henry DeTamble and Clare Abshire from The Time Traveler’s Wife. Jake is the square voice of reason, while Henry and Clare go off on their punk-rock-and-booze-fueled several-day benders. But soon, Henry and Jake discover they have more in common than they may have initially suspected, and Jake is able to teach Henry how to control time travel. They decide to use their ability only for pranking, which they develop into a hit reality show.

3. Oskar Schell, from Extremely Loud and Incredibly Close, becomes the understudy/apprentice of Owen Meany, of A Prayer for Owen Meany. But they soon realize they disagree vehemently on the nature of predestination vis-á-vis human kind’s ability to change its fate. The book is a Thomas Mann-esque “novel of ideas” with no discernible plot and no conclusion. It’s immediately hailed as the first of a new genre — philo-fan-sophical fiction.

2. Lisbeth Salander is kicking ass again! This time, she has teamed up with Daenerys Targaryen (of A Game of Thrones), the girl with the REAL dragons, to rule the Seven Kingdoms as Sister Queens. But only a year into their reign, evil, incestuously-birthed Joffrey Lannister sends an army to usurp the throne. In the final, intensely violent battle scene, Lisbeth uses her 38″ inch, 8-pound, Valyrian steel-bladed broadsward, with a gold quillion, and an oak scabbard carved with the image of 14 dragons and a pierced eyebrow (Lisbeth’s house’s sigil), to defeat the evil Lannisters.

1. Drug-addled and lonely, Hal Incandenza (of Infinite Jest) meets Skeeter (of The Help) at a modern-day dance club. The sparks are instantaneous — and it’s not long before they’re traveling around in a van, solving mysteries.