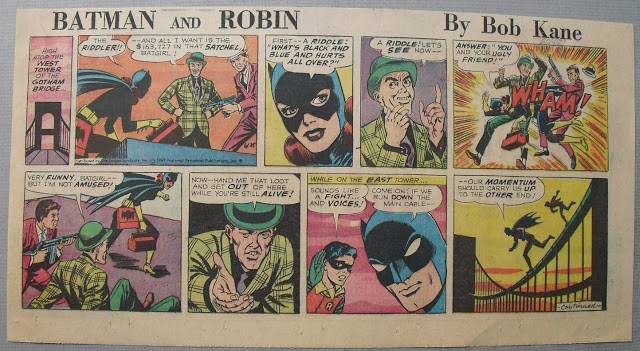 Barbara Gordon’s Batgirl had quite the debut in 1967. First, she showed up in January’s issue of Detective Comics where she battled alongside Batman and Robin. In September of that year, she appeared on the small screen in the Adam West Batman television show. Usually forgotten in the mix of Batgirl’s coming out year is her May, 1967 debut in the pages of the Batman with Robin the Boy Wonder newspaper comic strip.

The various newspaper strips featuring heroes found in the pages of Marvel and DC Comics take place in their own little worlds. They have the same setups as their monthly cousins but their details are different. For instance, in the newspaper strip, Barbara Gordon is the daughter of Police Commissioner James Gordon just as she is in the monthly books. She’s also a librarian, exactly like her counterparts. However, there’s one enormous addition that the newspaper Batgirl had that the others did not: This Batgirl had a “huge and elderly” Asian judo-master sidekick named Ho Say Guy who worked at her library and only spoke broken English.

From Batman with Robin the Boy Wonder – May 28, 1967 by Whitney Ellsworth and Joe Giella

I had no idea this was coming when I read IDW’s excellent Batman: The Silver Age Newspaper Comics Volume 1 reprint. It was jarring to read a take on Batgirl’s early career and turn the page to discover an incredibly tone-deaf caricature like Ho Say Guy. Sure, he seemed like a nice guy who was privy to Batgirl’s secret identity and who could (and did) battle Batman and Robin to a standstill, but the whole thing was simply too icky. It was as if Mickey Rooney’s Breakfast at Tiffany’s character had a larger older brother who spent time with Batgirl.

From Batman with Robin the Boy Wonder – June 4, 1967 by Whitney Ellsworth and Joe Giella

Ho Say Guy only appeared in this run of strips during this volume. In the coming months, when Batgirl again appeared, he was no where to be seen. Now, IDW has more of these reprints coming out and it seems possible that this unfortunate character may again show up but I sure hope not.