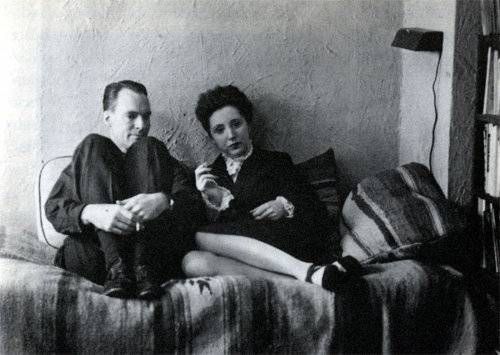 All right, because VALENTINE’S DAY is just around the corner (don’t make that face, you don’t have to have a boyfriend/girlfriend/special friend to have a valentine, your valentine can be a parent or a sibling or a friend or a co-worker or anyone you like, now stop making that face), I thought it would be fun to go over the love letters of some famous writers and see what love-letter writing lessons we could learn from the masters.

Let’s start with Henry Miller and Anais Nin because they are one of the sexiest literary couples of all time and if love letter writing tips from these two won’t get you some hanky-panky, heaven help you, I do not know WHAT is going to get you hanky-panky.

“I could scarcely talk to you because I was continually on the verge of getting up and throwing my arms around you.”

Way to own your own awkwardness, Henry Miller! More than own, motherf—ing transform that mumblecore performance he must have given into UNBRIDLED PASSION. Well played. Also the phrase “throwing my arms around you” is so choice here, anything more vulgar or on the nose would not have played as well.

“Everyone else seems to have the brakes on… I never feel the brakes. I overflow. And when I feel your excitement about life flaring, next to mine, then it makes me dizzy.”

Always a GREAT tactic in a love letter, the old “Everyone else in the world is so boring, how did we, the only remotely interesting people on the planet, ever manage to find each other?”

I’m going to steal this brakes metaphor and use it on my fiancé and see if it works. I think if I say it while wearing fishnets and lingerie, I’ve got pretty good odds.

“Anais, I only thought I loved you before; it was nothing like the certainty that’s in me now. Was all this so wonderful because it was brief and stolen? Were we acting for each other, to each other? Was I less I, or more I, and you less or more you? Is it madness to believe that this could go on? When and where would the drab moments begin?

So here’s what this teaches us. You’re allowed to be honest and realistic in a love letter AS LONG AS YOU’RE HONEST AND REALISTIC IN THE SEXIEST AND MOST PASSIONATE WAY POSSIBLE. I mean, Miller’s bringing up some very legitimate concerns here. But he’s bringing them up SO HOTLY. The rapid-fire questions are such a seductive device. And just kill me with “When and where would the drab moments begin?” I’m also stealing this to use on my fiancé. This sentence is so hot, I am not even sure it would require the use of lingerie! But maybe I’ll have it under my regular clothes JUST in case.

Hope this gave you some good ammo for your love letters! If borrowing from anyone can get you action in the bedroom, it’s Miller and Nin. When did they ever stop having sex for long enough to write each other these letters? Or, for that matter their respective novels and diaries? Also, I think their collected love letters would make a BANGARANG Valentine’s Day gift for anyone who likes sexy words (that’s everyone, right?)

Whose love letters should we learn from next? I’m thinking the Fitzgeralds, I’ve been obsessed with that beautiful and doomed couple since I was a teenager…