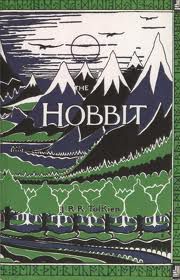 All this talk of The Hobbit, now that the movie is out, has turned me back into the sulky, sullen eighth-grade version of myself. That version of me is full of exasperated sighs and crossed-armed eyerolls and heaping amounts of disdain for The Hobbit and anyone who dare say a kind word about it. Lucky for this eighth-grade version of me, my fourteen-year-old eighth-grade nephew also dislikes The Hobbit. It’s been a real bonding experience for this spinster aunt and her teen nephew. Also, it makes me think the exasperated sigh/fluttery-eye-roll thing is hereditary.

I can’t remember exactly why I hate The Hobbit anymore, I just know that I do and it all started back in eighth grade, during the winter of 1986 when I was a six-foot-one, chubby thirteen-year-old who lived in Minnesota. It was awful because, well, I was in eighth grade and that is awful all on its own. But to make matters worse my English teacher, Mrs. Weingartner, assigned The Hobbit.

Oh, I should also mention that Derek Broten sat in front of me in English class and he made me kind of swoony. He was one of those mid-eighties skaterboys with the long bangs and a spikey sidepart gelled up like a shiny picket fence. He was funny, sassy, and totally dreamy. His dreaminess was helped along by the rumor (I have no idea if it was actually true though to this day I believe it is) that his uncle was Neal Broten. Perhaps you have to be a Minnesota girl to understand the impact this could have on a junior high boy’s rep. Neal Broten was a hockey star and not just for the Minnesota North Stars, but he also played on the 1980 US Olympic ‘Miracle on Ice’ hockey team. Derek was practically the Prince Harry of Roosevelt Junior High. Or at least he was in my head.

As I mentioned, Derek was sassy and talked a lot in class. A lot. And he was fond of crying out things like “Jodi’s copying my answers!” Which would make me laugh and Mrs. Weingartner would retort with something like “you should copy off her paper, she’s doing better.” Of course I was doing better, I was a booknerd in English class. That was my time to shine, and I was the kind of knowitall smartypants who loved to discuss how much I loved loved loved all the books we were assigned.

That was until The Hobbit. Man, did that book suck, and I was not afraid to vocalize how much it sucked. And how boring it was. And how much I loathed every single word on every single page. In my memory, The Hobbit is the very first book I disliked. I managed to live thirteen and a half years without hating a book — not too shabby.

Did the fact that Derek also liked to vocalize how much The Hobbit sucked with all its suckiness play into my ever-growing disdain? Perhaps. We really did present a united front because after school I’d call him on the phone and we’d talk about all the ways in which we hated The Hobbit and all the ways in which Mr. Mister’s “Kyrie” was totally rad.

To this day I still remember more about those phone calls than I do about The Hobbit, aside from the fact that it’s the boringest book to ever bore anyone.