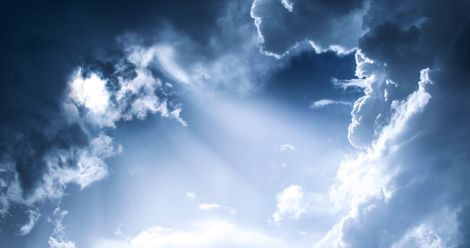 On the Island where I come from… 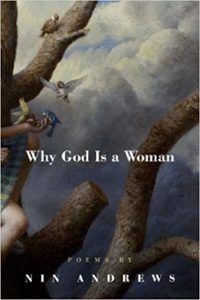 Is how most of the poems begin in this little book of power. Why God is a Woman is a social satire that strikes deep at the patriarchy. The setting is an imagined island governed by women. On the island, all women look like Angelina Jolie and men are beautiful angels that suffer from vagina envy. Masculine traits like strength, greed, and anger are shortcomings. The male temperament is questioned: men lack patience and self-control, and are quick to anger, so they cannot be trusted with power. The island isn’t perfect, but by transposing the roles of men and women, Nin Andrews has created a scathing commentary on the accepted social structure of the patriarchy.

Why God is a Woman is written in a form of poetry called prose poetry. I am a recent convert to prose poetry—finally finding a form of poetry that speaks to me.  If you’re used to reading novels, you might open a book of prose poetry and be pleasantly surprised to find only half of the page used. Prose poetry is written in paragraph form rather than verse, but it lacks the cohesive narrative structure of a novel or short story. Prose poetry feels more manic, and breathless. It also likes to get fancy with language and imagery, so it’s more poetry than prose, but (I think) more accessible than other forms of poetry.

Beyond structure, this book—regardless of how you feel about poetry—is just good. It would be a great pairing with books like The Handmaid’s Tale, The Power, or Red Clocks. Popular books that deal with power dynamics between men and women. Dystopias/utopias that amplify the contentious battle between the matriarchy and the patriarchy. It’s timely.

Nin Andrews asks us to bend our mind and imagine a different kind of world. A world with different social mores and virtues. A world where femininity is desired, and masculinity is a weakness.

Read these quotes and then read the book. I’m not kidding—it’ll bring you closer to your inner warrior goddess!

15 Quotes from Why God Is A Woman

“On the island where I come from women rule. They run the country, control the wealth, and decide who will do what, why, and when.”

“A man is meant to do physical labor and menial jobs like paving roads, sweeping floors, and cleaning latrines, for this is the work God designed for Island man. If God had wanted men to do office work, he would have made them less muscular, less angry, less beautiful, less eager for sex and war.”

“The worth of a man was an ongoing Island debate.”

“In one story, the Island men are said to be the last living descendants of the angels. Blown from heaven in a moment of God’s wrath, the winged men landed on the Island where they were rescued and nursed back to health by Island women. For this reason, they are forever in the Island women’s debt.”

“A country that celebrates greed is a country that celebrates death, the teacher proclaimed, not only of people and faith and ethics, but also of our world’s oceans, forests, and animals. The boys shuddered. How can men be so evil? They wondered. They were then taught how they could grow up to be good and compassionate men who would willingly sacrifice their own wishes for power and glory so that others, especially the Island women and children, might be served rather than oppressed. In this way, the teacher said, all Islanders will live happily and peacefully ever after.”

“Popular are the revealing blouses left unbuttoned to display the male chest and abdominal muscles and the traditional Island tattoo of a native flowering vine that begins at the navel and twines below the belt where the male flower blooms.”

“Like all proper Island boys, I knew I had to remain a virgin. I had to keep my reputation as clean as freshly bleached linen.”

“On the Island where I come from vagina envy is the most common psychological disorder.”

“The women had little faith in the male work ethic. As my mother explained it, men lack patience, the key to great work.”

“Anger, he said, is unbecoming of a proper Island boy.”

“The men, it is said, will do anything to please if you give them the right treats. A good meal often works just fine. But most will do a lot for a bit of praise, and anything for a round of thunderous applause.”

“On the Island where I come from everyone knows it was Adam who ate the apple in the Garden of Eden. The snake had nothing to do with it. Adam didn’t even apologize. Instead he grabbed the apple as soon as he thought God wasn’t looking and bit into it greedily, the juice running down his chin.”