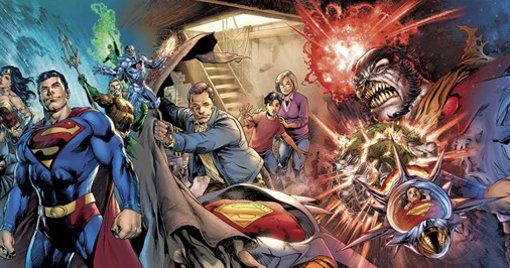 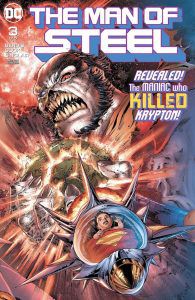 We’re now more than halfway through Man of Steel, the weekly miniseries written by Brian Michael Bendis and drawn by a slew of artists including Joe Prado, Ivan Reis, Doc Shaner, and Ryan Sook, and meant to kick off the new “Bendis era” of Superman stories, as per his new exclusive contract with DC. I’ve been enjoying the series so far, but I’ve got one big problem with it—one that lies at the heart of the story.

The main villain in Man of Steel is a new character named Rogol Zaar, an alien who, the series has suggested, was responsible for Krypton’s destruction. As of this writing, we don’t know exactly how he managed such a thing, or even if his claims are true. Personally, I hope they’re not, because I don’t want one person to be to blame for Krypton’s destruction, and if they are, I don’t want to know who it is.

It’s hard to resist the temptation to put a name to the trauma in a superhero’s past. As early as 1948, Batman’s parents weren’t killed by a nameless mugger, but by a man named Joe Chill. Over the years, Chill was given an increasingly complex history, climaxing in sheer ridiculousness when it was revealed that Bruce’s uncle’s housekeeper, who practically raised him, was Joe Chill’s mother. Meanwhile, in the 1989 Tim Burton movie, we learn that the Joker killed Bruce’s parents prior to his own disfigurement, a twist that ties things up just a little too neatly for most fans.

Netflix’s recent take on the Punisher fell into this trap too, revealing in Season 2 of Daredevil that the seemingly senseless mob violence that killed Frank Castle’s family was actually an NYPD sting operation gone wrong that was actually targeting a drug dealer who was also Frank’s former commanding officer, while Season 1 of Frank’s own show revealed that the target of the incident was actually Frank because he’d been part of a group that conducted unsanctioned torture and executions in Afghanistan. You got all that? Good, now explain it to me.

The problem is, all of these reveals and actuallys weaken the characters they’re supposed to be buttressing.

If Frank Castle’s family is taken from him by senseless mob violence, it’s understandable (well…as understandable as anything the Punisher does, at least) that he would launch a crusade to avenge them by eliminating mob violence and/or criminals entirely. If he knows exactly who to blame—if there’s a specific pair of feet to lay his family’s deaths at—then why not just kill that person or those people and be done with it? Frank Castle isn’t exactly the poster boy for philanthropy of the Marvel Universe. He’s not doing this out of the goodness of his heart. His continued quest only makes sense if the answer to who or what killed his family is “mob violence” and not “some guy I know.”

Similarly, Batman’s goal is to end crime, not Joe Chill in particular. Oh sure, there has always been a mugger in the story, and you might as well give him a name. But wasting time focusing on him is missing the point. Have Bruce take him out early and move on with his mission—or better yet, have Chill be killed or arrested sometime between the Waynes’ deaths and Bruce’s re-emergence as Batman, and take the matter out of Bruce’s hands entirely. Because the presence of Joe Chill offers Bruce Wayne a chance at closure, and that’s something that an ongoing story can’t have.

And Superman? Well, I agree with Jon Morris over at The Chronological Superman when he says that no one individual should be responsible for the destruction of Krypton. As he points out, it means that Jor-El was wrong—anathema, even if I personally find Jor-El obnoxious and boring—and also skates too close to an attempt to make Superman’s guiding principle about revenge, which is a deep misunderstanding of the character. But it also…adds nothing? Krypton is gone. Any reveals about why or how mean nothing, because the planet isn’t coming back.

Moreover, putting a name to any of the horrors listed above misses the point to all of these heroes, and to superheroes in general: sometimes bad things happen for no reason. You can’t stop them. You can’t change them. But it’s how you respond to them that determines who you are.

If you lose a world, will you dedicate your life to protecting your new one? If your parents are killed, will you spend your every waking moment trying to ensure that no other child goes through that? If your family is taken from you, will you…uh…shoot everyone you meet?

…Okay, yeah, so the Punisher’s not exactly a role model, but the point stands, just as it stands for every super villain who suffered through a devastating lab accident and decided to rob banks instead of lobbying for more stringent lab safety regulations. The world is uncertain! How you cope with that uncertainty is what matters.

Sure, there are some heroes who were inspired to be heroes without experiencing personal trauma (Wonder Woman, Captain America) and others who dealt with the instigators of their trauma promptly and kept heroing on regardless (Dick Grayson, Daredevil). I’m not saying an unknown finger on the trigger is necessary to make a good super- or antihero. And as I mentioned above, I’m genuinely enjoying Man of Steel, philosophical differences aside. (When you read comics long enough, it gets very easy to say “This story is great! I disagree with it on a fundamental level!” with utter sincerity.)

But—no offense to Mr. Bendis—I hope Rogol Zaar either turns out to be a big ol’ space liar, or quickly vanishes from continuity. Because putting Krypton’s doom in the hands of one individual makes Superman’s never-ending battle just a little too immediate and petty. And because my Superman is here to stop the bad things he can and help us cope with the bad things he can’t—not spend his time wallowing in a fight he’s already lost.