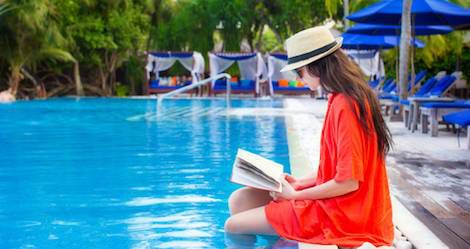 Ugh. Do you ever have a first-world non-problem, know it’s a first-world non-problem, and continue to obsess about it anyway? Being a stubborn homebody who is no longer young enough to be carried up, down, or over inaccessible obstacles, my default response to proposed vacations is an automatic “It sounds fun, but no thank you.” As such, I haven’t thought about how to pack books for a trip in what feels like eons. The last time I left the country, I was a teenager. I took a full suitcase of novels, which was good because my family kind of forgot that there were a lot of activities I wouldn’t be able to partake in/places I wouldn’t be able to go because of my disability. It was also bad because another family with younger children latched onto me and my books as a babysitter, something I quickly shut down. Just because I’m stuck in a hotel while you’re all gawping at the sights, doesn’t mean I want to divvy up the book series I’m currently reading so that your 8-year-olds are occupied. There’s also no way I’d be able to pay for their therapy bills if they had nightmares about the cannibalism and gore featured in said book series.

The point is that by the end of the week, I had read every single book I’d brought with me, and decided that unless the ultimate destination was one of the Disney parks or someplace with even a shred of accessibility, I was never going to go on vacation again.

That decision blew up in my face (as most teenage declarations tend to do) as I impulsively agreed to go on a weeklong vacation to a purportedly accessible destination. Which is good. Cool. Yup. I’m forcing myself out of my comfort zone (but not all the way out because I’ll be bringing along a bunch of reading material, in case the surrounding area is inaccessible and I have to stay inside. I’ll just read in air-conditioned bliss instead). It’s going to be fine. Except: how the heck am I going to decide which books to bring with me? See what I mean about first-world non-problems? I have so much on my TBR, but none of it feels appropriate for a vacation.

If I bring a book that’s over 700 pages, am I already mentally giving up on the possibility that this trip will be good? I mean, yeah, in the past I’ve been assured things were totally accessible, only to discover that—surprise! The shower is so small your walker won’t fit into it at all, and neither will a chair, so sponge-bathing with the communal bathroom’s sink is definitely going to be a thing. Is it pessimistic to assume doom and gloom from the outset? Should I pick smaller books on the principle that maybe this won’t be an unmitigated disaster? Should I only bring fast-paced thrillers, because those are obvious beach reads? If I bring more than one, are they all going to get predictable and boring? Should I only bring one? Which one? What if I pick the wrong one and it sucks and I shy away from thrillers for the next six months? Comics are an obvious pick, but they’re like quick, bite-sized snacks (unless I bring an omnibus… which is not a good idea, just because they weigh a lot and sometimes the binding is iffy. I’m probably going to be stubborn and bring an omnibus). I could always use ComiXology or my ereader, but let’s be honest for a second here: I have no impulse control. If I bring my ereader or purchase comics online, I’ll be broke by the time I get back home.

What if I brought a series with me? That way I’d have time to get fully immersed in a world. Which series? The more I look at my TBR pile, the more I see things I should probably just donate, because my interest in reading them has dwindled. Should I just go out and buy a bunch of books, immediately effecting a book-buying ban for the rest of the month? Should I go on a Book Outlet shopping spree?

Honestly, in the end, I’m probably going to end up playing eeny, meenie, miney, moe with my eyes closed, because whatever I choose is ultimately going to get read anyway. Picking books to travel with shouldn’t be this difficult.

How do you choose books when you’re tackling this first-world non-problem? Let me know in the comments; suggestions for books with “vacation”-y vibes also welcome!