The Handmaid’s Tale came in at #37 on the list of Riot Readers’ top 50 novels. Atwood tells the story of a woman who is trying to make sense of what her life has become in the wake of a theocratic revolution. Once, she was a wife and mother. Now, she is merely a vessel, valued only for her fertility. If you were as fascinated by this look at a society where love is irrelevant and there are no such things as reproductive rights, then take a look at these titles:

Many people have said that When She Woke is a retelling of or different take on The Handmaid’s Tale, but that’s not the case. They have a common ancestor in Nathaniel Hawthorne‘s The Scarlet Letter, and they do feature governments that are dictated by religious doctrine, but the stories couldn’t be more different. In this novel, Jordan tells the story of a woman who defies her religious upbringing, first by having an affair with a married man, then by aborting their child. She is convicted of murder, and she is made red from head to toe so that people will know what she has done. She is rescued by an underground network of people who do not feel as though she has committed a crime, and she begins a journey that will lead her to freedom. It is not an easy journey by any means.The thing that most stayed with me after reading this book is just how close it is to becoming reality. It’s much easier to identify with than the typical dystopian novel. 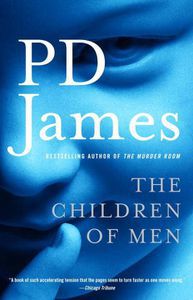 The Children of Men by P.D. James

James tells the story of a society that has become infertile. The years is 2021. The last children born on the planet, the Omegas, are 26 years old. They are the sacred youth, and they are treated to lives of luxury and excess. The old are a burden. Everyone in between is only useful for what they can contribute to the continuation of society. The story is told in a mixture of journal entries by Theo, an Oxford don, and third-person narrative. Theo is approached by a group of dissidents called the Five Fishes. They want him to approach the “egalitarian” leader of England, Xan Lyppiatt, and seek a return to a more democratic system. He agrees, but the meeting does not go well. Xan promises that dissidents will be punished. Theo would have parted ways with the group, giving it all up as a lost cause, but he is given hope. And once he has it, he will do anything in his power to keep that hope alive. The movie by the same name is only loosely based on the novel, though James is said to have been pleased with how it turned out. Both are worth checking out. 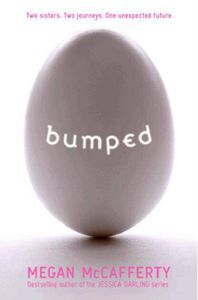 This is the first novel in a YA series that tackles the subject of reproductive rights from a very different angle. In this scenario, McCafferty describes a society in which a virus renders everyone over 18 infertile. Teenage pregnancy has become a must, and childless couples will pay good money to a have the right girl give birth to their child. It’s a very lucrative business, and children are often groomed to be RePros, making them into the ideal surrogates for rich families. That is what Melody’s parents have done, and she accepts it as the way things should be until the twin sister she didn’t know she had appears on her doorstep. This changes everything. She allows herself to admit that she doesn’t want to “bump” with the genetically perfect Jondoe. Harmony, her sister, comes from a completely different world. She realizes that a life where she is forced to marry young and reproduce as often as she can is not the life she wants, either. Both girls want to choose their own paths. Their story concludes in Thumped. The books are best when read together. Alone, they don’t quite work. Together, they offer a provocative look at teen sexuality and reproductive freedom.