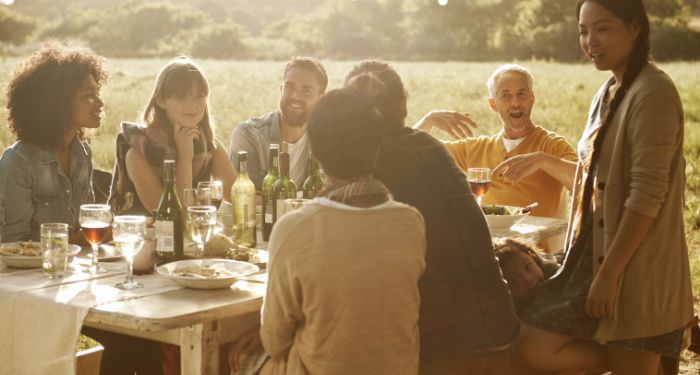 It truly pleases me that one of the most recognizable songs in the world, one we hear at the stroke of midnight on New Year’s Eve, is a Scots poem from 1788. For its small size and population, Scotland certainly has had a huge impact on global culture. Another phenomenon found around the globe is the celebration of the poet author of “Auld Lang Syne,” Robert Burns. Burns Night (or Burns Supper) is a yearly event to celebrate the poet’s January 25 birthday. Burns Night events typically include reading poetry, eating haggis, and raising toasts, but they’re so much more than that.

First, two educational sidebars. One, Scots and Scottish Gaelic are not the same thing! Scottish Gaelic is a Celtic language indigenous to the Scottish Highlands, among other places. It’s the source of words like “sassenach” (for the Outlander fans) and the toast “sláinte.” Scots is a Germanic language, like English, indigenous to the Lowlands. Naturally, speakers borrow words across these languages, but they are distinct. Burns wrote his poetry in Scots.

Two, haggis is one of the great misunderstood foods of the world. The gross-out description that highlights the sheep stomach aspect eclipses what a tasty food it really is. It’s something in between savory oatmeal and sausage, and is often sliceable like meatloaf. Like sausage, it adapts well to a vegetarian preparation, with legumes, nuts, or other ingredients providing texture and savoriness. I’m someone who loves cataloging the great sandwiches of my life. One of my all timers was a grilled veggie haggis, brie, and caramelized onion sandwich I had in a cafe attached to a gas station on the Isle of Skye. I will always defend haggis. So did Rabbie Burns; he wrote a whole poem about it. So, back to Burns Night.

Who Was Robert Burns?

Robert Burns is considered the national poet of Scotland, and he lived from 1759 to 1796. The oldest of seven children, he grew up on a farm. Burns’s father, a self-taught man, also taught Robert to read and write. He aimed his youthful attempts at poetry at girls he knew, which is some real foreshadowing. Tracking the timing of his various relationships and the children he fathered is an exercise not unlike making a murder board with thumbtacks and red string.

Unlucky in a venture to work in a flax shop, he returned home to his father’s farm and befriended a sea captain who encouraged him to take up poetry. He was certainly a better poet than a farmer. Because of his financial problems, he sold his first volume of poetry, Poems Chiefly in the Scottish Dialect, to pay for passage to Jamaica to work on a sugar plantation. His poetry was so instantly successful that he didn’t need to take that job. Instead he moved to Edinburgh, printed another edition, made more money, and found a sponsor.

As for his poetry, his works are pioneering in the capital-R Romantic movement, influencing later writers like William Wordsworth, Samuel Taylor Coleridge, and Percy Bysshe Shelley. His poetry is direct, and often pointedly humorous. As a lyricist, he used many folk melodies to create tender, lasting songs like “A Red, Red, Rose” and the famous “Auld Lang Syne.” With poems and songs making his sense of patriotism for Scotland plain, it’s no wonder he’s the national poet.

Burns was, at best, a complicated guy. He had a truly troubling affinity for embarking on “affairs” with servants. His willingness to work as an overseer of enslaved people in Jamaica is also troubling, and his authorship of the poem “A Slave’s Lament,” said to espouse his egalitarian views, is debatable. People gathering to celebrate his life and poetry are likely ignorant to these uglier sides of him. Instead, the gatherings center on celebrations of all things Scottish — bagpipes, whisky, haggis, music. A full Burns supper has a fairly elaborate order of events, in fact.

The Order of Events

The BBC’s website has kindly provided a full list of the events of a Burns Night, along with recipes. The first event is the bagpipe music that announces things are getting started. This makes me realize that the one time I went to a properly fancy charity gala as part of a past job had a touch of Burns Night to it, as bagpipers led the group from the cocktail area to the room where dinner was being served.

I’m not kidding when I say how critical haggis is to a Burns Night. After a welcome and grace, bagpipers welcome the haggis into the meal. Ideally, it’s carried on a silver tray. The haggis is then addressed with a recitation of the poem “Address to a Haggis.” If you want a rendition of that poem by someone from the same part of Scotland Burns hailed from, I’ll drop that Soundcloud for you. After the poem, everyone raises their glass to the haggis.

After the Haggis Appears

Dinner and drink commences. Neeps (turnips) and tatties (potatoes) traditionally accompany the haggis. Scotch whisky washes all that down. There are more entertainments, like songs and poetry recitations, as well as more toasts. Toasts are to the Immortal Memory of Robert Burns, the Lassies (traditionally to thank those who prepared the meal, but now more to celebrate women generally), and a reply toast from the “lassies.” The host thanks everyone for coming, and the evening closes with a rousing rendition of “Auld Lang Syne.”

Like any good tradition, Burns Night is adaptable to virtually any place and time. Any night that combines food, drink, poetry, music, and good humor can be an opportunity to spread a love of Scottish culture while celebrating other cultures as well. Indeed, this is how Burns Night plays out in many places around the world.

Burns Night Around the World

In pandemic times, many Burns Nights have gone virtual. Prior to that, they’ve been celebrated in ways big (like World Record big) and small around the world. The University of Glasgow has compiled an informative interactive map of past Burns Night events around the globe. I’ll highlight a few.

St. Andrew’s Societies are Scottish heritage organizations that often organize Burns Night. For example, the St. Andrew’s Society of Barbados hosted 80 people in formal dress for a Burns Night in 2013. In addition to haggis, guests dined on jug jug. This traditional Bajan dish is said to be derived from haggis.

If you happened to be in Port Lockroy, Antarctica, in 2013, you’d have been able to attend their Burns Night with four people. Whether they welcomed the 40-year-old canned haggis into the dinner on a silver tray, I don’t know.

The Scottish government helped to organize a Burns Night on Banjul Beach in Gambia in 2019. One of the entertainments was a rendition of Burns’ poem “Tam o’Shanter,” translated into Jamaican patois.

In places where many cultures come together, like Vancouver, B.C., you may find events that combine Burns Night with other festivities like Lunar New Year. Vancouver has a long-standing celebration called Gung Haggis Fat Choy, with such fusion cuisine as haggis lettuce wraps and haggis and shrimp wonton dumplings on the menu. Both Scottish and Chinese cuisine feature turnips; it’s a match made in heaven.

How Will You Celebrate?

If you’re looking to host a Burns night for yourself, we’ve collected some ideas to inspire you. I’d also recommend exploring the above interactive map for even more ideas. If you’re looking to keep it really low-key, tuck in with a book of poetry and a bag of haggis crisps (they’re vegan!). Have a wee dram if you’re feeling fancy. And a wistful rendition of “Auld Lang Syne” is always in order.