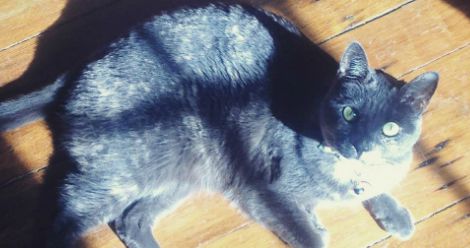 A lot of the people I care about aren’t human. I bet some of yours aren’t, either. 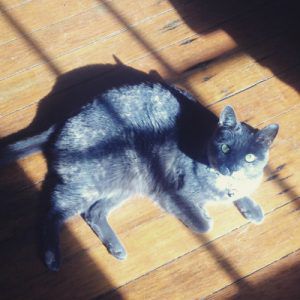 I promise this article isn’t an excuse for me to share this picture of Rilla.

There are my three sweet kitties: Oliver, the grumpy and majestic orange boy with the pointy face; Lattis, the frolicsome but altruistic roly-poly calico; and Rilla, the lithe and glossy grey girl with the affectionate heart. There are my nibbling pups: Pupsy, Sweet Pea, and Coral. There’s the elderly Roger, with whom I share a soul connection, and his enthusiastic and joyful sister, Bella. And that’s just the icy tip of my current non-human family and friend iceberg.

My connections aren’t limited to dogs and cats, either. My mom put a little albino cory catfish into my care last summer; I promptly named him Fitzwilliam and procured an aquarium and a small school of friends for him. Eight months later, they are extremely big and happy and they do everything together. When I was a child, one of my closest non-human companions was a pigeon that my mom took in when she found him, leg broken, being kicked around by some tweens. As Cooie healed, I spent a lot of time with him, first in the garage, and then in the front yard. Eventually, he left to live with other pigeons, but he still came back to visit me.

I don’t think my relationships with animals are at all unique. Humans have always bonded with non-human animals. So why is this kind of relationship, with well-rounded animal characters, so underrepresented in literature?

The wordlessness of most animals may be one reason. It’s true that the only animals who can use words are a few primates who have learned to sign. However, communication is not limited to words. Humans and animals talk to each other through body language, scent, facial expression, touch, tone of voice, and so many other behaviors. Come to think of it, humans talk to one another that way, too.

Another reason why well-rounded animal characters are lacking may be that many people perceive close relationships with non-human animals as sentimental or anthropomorphic. Animal characters seem like the purview of fantasy, cozy mysteries, or the inspirational animal genre that always seems to have a whole shelf at Target. Those genres are great; I do not mean to denigrate them. I only mean that since so many people have close relationships with animals, one would expect animal characters to permeate every genre, not just the ones that are folksy or funny or sentimental or fantastical.

It’s time for all genres to include non-humans. As readers, let’s hold animal characters to the same scrutiny that we hold human characters. Animals have their own internal lives, their own needs, desires, fears, joys, loves. They start conversations, they don’t just respond to them. Animals exist in the world as complete beings, not simply as props for the humans near them. This isn’t quaint or cute or anthropomorphic; this is reality. Writers, please reflect this in your writing. And readers, please interrogate the absence of rounded animal characters in the literature you consume.

Now, if you’ll excuse me, I’m about to hang out with a few of my favorite people. And only one of them is human.