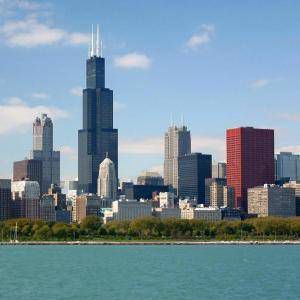 Those of you that follow us on Instagram might have recently seen Book Riot popping up at bookstores all over Chicago. We hit seven bookstores in one day. The original goal was eight, but the itinerary had to be adjusted on the fly due to time constraints. While I’d love for this to someday develop into a Slow Roll type situation, in this case it was just my girlfriend and me on rented Divvy Bikes.

She was the brains behind the operation. Besides revealing to her that I’m not coordinated enough to let go of the handlebars while riding, I pretty much just said Gnarf all afternoon and spent too much time diddling on Instagram. When I cast aside my phone though, I was blessed spending a day in seven of the Windy City’s legendary literary hubs, six to which I had never been. I’m linking a map to our route. Here’s a list of the bookstores we went to:

I first heard of a bookcrawl at the Ann Arbor Book Festival. They put on this really cool three night event each year in which local bookstores host readings that are followed by readings at local bars and beer gardens. Essentially, you get to hear some great writers and knock back a couple solid local brews. All in all, a great way to spend an evening.

In the case of the great Chicago Bicycle Bookstore Tour, it took us a full day to fit in all of our destinations. We left my apartment at 9:00 a.m. and returned around 6:30 p.m. We started with coffee and doughnuts and also made a stop for lunch. In general, we tried to limit our time to around half an hour per shop, which may not seem like much, but that’s 3.5 hours of store time throughout the day. Add in that we probably spent 2 to 2.5 hours biking, plus lunch and time spent wandering neighborhoods, and you have a pretty full day.

For some, this type of adventure might cause more anxiety than pleasure. I can only imagine some book enthusiasts get the shivers putting a half hour cap on the amount of time in one bookstore. I can tell you we hit one or two spots that I would dedicate an entire day to. There were also one or two places where the limited time was sufficient. All I know is I got a day of exercise, books, delicious food and exploration. I’m still relatively new to Chicago, and I can’t think of a better way to not only get a grasp on the literary landscape, but also a better idea of the city as a whole.

For those who live in bigger cities or literary metropolises, I would definitely encourage spending a Sunday this way. I think bicycles are the ideal way to go because you get to see much more of the local landscape in between stops and get a good workout in for the day. Of course, in retrospect there are one or two adjustments I would make. Here are a few tips from my bookstore bicycle tour:

1. Map your route in advance. This might seem pretty obvious, but we charted everything out on Google Maps and then switched stops around so that we weren’t zigzagging too much. In the case of Divvy Bikes, it’s $7 for a 24 hour pass, but any time your ride from station to station is more than 30 minutes you get charged extra. Hence, we had to make sure a bike ride between bookstores took up less time.

2. Plan the amount of stops that you’re comfortable with. If more than three stops is going to make your head explode, you should probably just hit a couple and spend some quality time there. Sometimes it felt like we were jumping from place to place without being able to fully appreciate a store.

3. Manage your money wisely. Our book budgets were gone by lunch time. By store number three we were pretty much financially obligated to stop buying books. I like to think there’s no such thing as buyer’s remorse with books, but there were just so many possibilities.

4. One backpack is not enough. We just put things in my backpack throughout the day, and I can tell you by the time we got home it was resting heavy. Pretend you’re trick-or-treating, everyone carries their own loot.

5. Pack snacks! Kelsey and I brought Clif bars and some apples, which we ended up ultimately forgetting about after gorging ourselves on delicious Mexican food at lunch. If you have a decent sized group, make sure everyone brings their own food and water. Those of you who are experienced campers and backpackers know what I’m talking about. There’s nothing worse than having to ration your goods because others didn’t bring their A-game.

At the end of the day catch up on some football, drink beer, and read your new books. Boom, best Sunday ever.