When I worked in the public library, one of my favorite parts of the job was weeding. I loved going into my assigned sections of the collection—YA, literary criticism and theory, world history between World War II and the Cold War—and making sure what stayed on the shelves served the community and wasn’t outdated, or in poor condition. Removing the books which didn’t fit the criteria meant that those still remaining were better able to be found by readers looking for them. It also meant making room for adding new books to replace those with misinformation, outdated information, or with tattered bindings and covers.

This desire to keep shelves in their most useable state extended beyond the library. It’s not about wanting to be minimal; minimalism is not a thing I find realistic in my life nor does it align with my needs. It’s about instead keeping only the books which suit me and reflect me.

And yet, following a move this year, I can’t stop thinking about how having less in my life is a thing I do value and need. I packed my old home with a dumpster in my driveway, tossing the things that didn’t end up being used or that simply collected dust, had been broken, or couldn’t be donated elsewhere. It was extremely wasteful, but it was tremendously valuable in helping me move because it forced me to think about each item and its weight, both physical and emotional.

I’ve been working on my attachment to things over these last few months. After listening to Robin Wall Kimmerer’s Braiding Sweetgrass: Indigenous Wisdom, Scientific Knowledge and the Teachings of Plants, I’ve been looking more thoughtfully at everything I want and considering where it came from, along with what it might bring to my life. More, as the book explores nature and the way we as people communicate and engage with the world around us, I’ve spent more time considering whether or not what I’m adding to or taking away from my life impacts the living world around me. It certainly costs more to buy my blueberries at the farmer’s market than at the grocery store, but given that I have the means to use that extra cash (or can do that and sacrifice something else over the course of my month), it’s a choice I am consciously making, knowing that money not only stays in the community, but that the berries themselves were picked with love, with compassion, and with a desire to take only what’s there, rather than force more from an already-pillaged Earth.

This line of thinking about my place in the greater world only expanded while reading Cait Flanders’s The Year of Less: How I Stopped Shopping, Gave Away My Belongings, and Discovered Life Is Worth More Than Anything You Can Buy In A Store. The book follows Cait’s year of choosing to be more conscious of her spending and consumption, and it forced her to make a significant amount of change in her life to find the balance between being who she is and achieving what she wants to become.

Which led to her asking a question that I can’t shake, and that I can’t help but see as paramount to what weeding and culling a book collection is about: 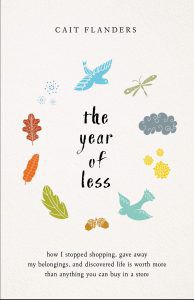 Cait talks about this as a means of winnowing her own book collection, and what she notes is that it’s not about choosing never to read a book again or deciding it won’t be valuable at some point. Instead, it’s about choosing to be intentional about the books which take up sacred space in one’s living environment.

This isn’t a question of judging yourself or your perceived failings. Rather, it flips this idea of failure on its head. The question asks you to consider who you are, who you are growing toward, and what it is that you think you should be, based on arbitrary standards. Maybe you’re a die-hard YA reader, but your shelves are covered in dusty copies of high school classics. Why is that? Is it because you have a memory attached to those books (valid—maybe you took great notes in them or you enjoyed the book when you read it in 10th grade lit class)? Or is it because you think you should be reading those books instead of the types of books you truly enjoy?

Perhaps you’re someone who chooses to eat dinner out most weeknights or chooses to eat a similar menu after a long day at work five days a week. If you’re holding on to a stack of cookbooks for various types of foods and you don’t read them for pleasure (which, again, valid!), what’s the reason you’re holding on to them? Is it because you want to learn or is it because you feel like you should learn? If it’s the second, perhaps this is the key to popping those pups in a Little Free Library or donating them to a local organization.

This question is equally useful when at the bookstore. I don’t know about anyone else, but I find myself feeling obligated to buy books that I’ve heard good things about sometimes—the same books I could easily request at the library. It’s not that I’m not genuinely interested in the book, but rather, I feel like I should buy it in order to get to it some day.

But do I really want to own it? Or do I want to remember to request it from the library when I’m looking for a good read? Those questions can better be turned to asking if it’s the book for the me I am now or the me that I think I should be.

I’ll never be a minimalist, but knowing how much there is to chew over when it comes to being a consumer, I find there to be tremendous value in considering each purchase with a few minutes of forethought. It’s equally useful to consider each thing I own in the after, too. Is it something I’ll want to move again? Is it adding anything to my life (I don’t think a thing needs to spark joy in the Marie Kondo way, but rather, it needs to have some purpose or meaning)?

Kemmerer’s book is a meditation on the way things in nature simply are. The trees and the grass don’t have expectations put upon them; it is, in fact, when we as people put too much of our idea of should upon them that we fail to see nature for what it is: beautiful and kind, generous and giving. We want the plentiful bounty every season, rather than accepting that some seasons, the fruit feels like giving more and in others, the fruit holds back. This is what it is to be.

Too often, I’ve found that it’s when I’ve picked up something because it was what I thought I should be, that I lose part of the person I really am under the weight of those things.