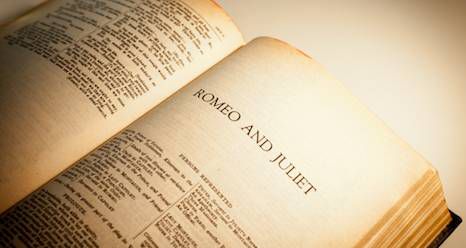 I’m on the lookout for Feminist Juliets.

The truth is, Shakespeare is not my favorite writer. While his poems are breath-taking, often visceral masterpieces, his plays have always left me feeling very cross and unfulfilled. After reading The Tempest a couple of years ago and finding myself completely appalled for many reasons, I’d all but given up on reading his plays altogether. Perhaps it is because I have an idea of what Shakespeare is capable of in his poetry, and his plays often seemed to fall woefully short — and that is before you take a look at how he treats people of color and women. Maybe that’s why I am drawn to other books, and movies, that take his themes and his worlds, and turn them into something…more. Because most of the time, I need them to be something more.

Happily, this is one of the many reasons why adaptations exist in the first place – to give us a fuller, more nuanced picture of Shakespeare’s universal themes.

And, once in awhile, I find more. Most recently, this happened to me as I was watching Bollywood director Sanjay Leela Bhansali’s adaptation of Romeo and Juliet, titled Goliyon ki Raasleela: Ram-Leela — a fast-paced, colorful retelling set in a vibrant cultural backdrop. But what struck me the most, though, was how delightfully bold and intelligently feminist this version of Juliet was. This Juliet was no coy, indecisive, woeful girl. This Juliet held on fiercely to what she deserved and demanded no less. As a single character, she turned what often feels like a tired old love/hate story into something alive.

Of course, then I started to wonder about other Feminist Juliets — ones I have met before and ones I have not. The ones who re-imagine the “young woman in love” trope in ways that remind us that women, no matter where we come from, are more than capable of both emotion and action in equal measures.

My earliest recollection of such a Juliet is from Sharon M. Draper’s Romiette & Julio. In all fairness, I don’t remember much about this version, since I read it over ten years ago. Still, I do recall that I admired how active Romiette was in dealing with the prejudices and struggles of her race, and was unashamed of her feelings or herself.

Later I found Stacey Jay’s Juliet Immortal, a version that showcases a grim, decisively worldly, practical Juliet who wages war against an actually evil, manipulative zombie!Romeo century after century, in order to protect humanity. I loved this world-weary, bitter, sorrowful-but-furious side that was layered onto the original character. This Juliet is careful, and very insecure, but she is also full of grit and resolve. She does not waver in the face of her tragedies. This is a Juliet who fights for what she believes in, and yet does not entirely believe in herself, which is a Juliet I could sympathize with completely.