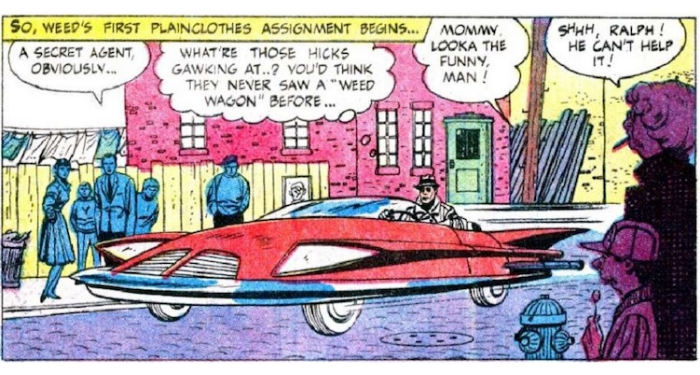 Sick of the Marvel Cinematic Universe? Bored with the DC Extended Universe? Allow me to introduce you to T.H.U.N.D.E.R. Agents.

T.H.U.N.D.E.R. Agents was the flagship title of Tower Comics, a short-lived company that flamed out in 1969, just four years after their debut. The comic combined two of the most popular genres to come out of the ’60s: superheroes and secret agents. The “superheroes” part won out fairly quickly.

Even so, the books were noticeably different from anything else on the market. They were twice as long (68 pages versus 34 pages) and twice as expensive (25 cents versus 12 cents) as the average comic. They also relied more on art to tell the story. It was a rare day in a Marvel comic when the characters and the narrator shut up for even a single panel — and when they did, Stan Lee usually made a cheeky editorial comment alerting us to the fact. Tower Comics features far less dialogue, to the point where a couple people wrote in to complain about it.

At the time, the series was well-received. It even won Alley Awards, a now-defunct honor for comic books, for Best Giant Comic and Best New Strip or Book — quite the accomplishment, as even back then, DC and Marvel tended to dominate everything.

And yet, the fact that we are not all flocking to theaters for the next installment of the Tower Cinematic Universe should tell you how well this project worked out. They were plagued by distribution issues, and in T.H.U.N.D.E.R. Agents‘ last letters page, the editors lament a lack of sales that led to the cancellation of two spinoff titles. You can track their dwindling fortunes by the number of issues they purport to publish per year: first they said ten, then eight, then seven. Then they reduced the page count, started reprinting old stories, and went on a year-long hiatus. Three issues after they returned, it was over.

Enough overview! Let’s take a closer look at the four titles that made up the T.H.U.N.D.E.R. universe, as well as what our heroes have been up to in the years since.

T.H.U.N.D.E.R. is an acronym for The Higher United Nations Defense Enforcement Reserves. They were founded after World War II to deal with secret, subversive threats that the above-board United Nations forces couldn’t handle.

Our adventure begins when agents of T.H.U.N.D.E.R. try to save a brilliant scientist, Dr. Jennings, from “enemy agents.” They fail, but Jennings left behind a bunch of fancy gadgets, including a power belt, a cloak of invisibility, and a mind control helmet. T.H.U.N.D.E.R. distributes these gadgets to its finest agents, creating a small super-powered army to fight foes like the Subterraneans, an underground civilization rightfully upset about atomic weapons testing destroying their city, and S.P.I.D.E.R., an evil counterpart to T.H.U.N.D.E.R..

Jennings also left no instruction manual, so the agents have to figure things out as they go along, which is always fun.

Menthor, despite the stupid name, had the most potential as a character. He was originally a double agent sent by the villainous Warlord, but the power of the mind-reading helmet he was given tapped into the goodness within him, turning him into a good guy whenever he put the helmet on. When he took it off, he forgot everything and reverted to low-level lackey John Janus.

Unfortunately, they squandered this concept’s potential right away. By Issue 2, Janus became a real good guy and defected to T.H.U.N.D.E.R.. He apparently wasn’t all that popular among fans as he was killed off at the end of Issue 7. His death was pretty brutal by 1966 standards, too: he was shot multiple times and then electrocuted. Yowch.

After Menthor’s death, he was semi-replaced by the Raven, a mercenary who joined mostly to get his hands on some flying tech that he could sell to the bad guys. After being rescued by the agents, he instantly reformed. That sounds familiar.

Raven’s stories are bizarre compared to the other features in this comic: the art style and tone are markedly different. His first foe is Mayven, a woman who controls child-shaped dolls that explode. If you’re into the weirder ’60s art styles, this may be the feature for you.

The T.H.U.N.D.E.R. Squad is basically Mission: Impossible with fewer Black people — in other words, they’re spies, not superheroes. The team did not have powers, but they did have some amazing names: Guy, Egghead, Dynamite, Kitten, and Weed. Weed.

The Squad was fairly fluid. Egghead kicked the bucket almost immediately, and Guy was soon given the power of super-speed and rechristened Lightning. The rest of the Squad swiftly faded into the background, becoming supporting players in the heroes’ stories.

After gaining powers, Lightning largely abandoned his Squad colleagues and began going on solo missions. However, the source of Lightning’s super-speed would make him age rapidly. It didn’t cause him too much trouble, except on one occasion, which is a pity because it’s an interesting concept. That seems to be the repeating refrain of this franchise: cool ideas with nowhere to go.

Len Brown — which is also the name of the writer who co-created the book with Wally Wood — was a young T.H.U.N.D.E.R. agent who became the recipient of a power-bestowing belt. Said belt granted him superior density, strength, and durability for up to half an hour at a time.

While Dynamo is physically the strongest, he is young and hot-headed and therefore susceptible to mental attacks. He could also be lazy, and he was perpetually embroiled in a love triangle (or rather, a love pentagon) with good-girl secretary Alice and various femmes fatale. As such, some of his stories could get a bit silly.

Speaking of silly, Weed of all people got a back-up feature in Dynamo. It feels sort of like what would happen if you made Jughead a government agent. I mean Comics Jughead, not whatever is happening on Riverdale this week.

But, showing off his flexibility, Dynamo was a convincing subject for more serious stories, including one from T.H.U.N.D.E.R. Agents in which his constant battling results in PTSD (“combat fatigue,” as it was called then). Fortunately, T.H.U.N.D.E.R. has a cure for that.

The hero known as NoMan was originally an elderly scientist, Anthony Dunn, in poor health. He figured out how to transfer his consciousness into a blue-skinned android, transforming him into a hero. He could now move at will between different android bodies, making him basically immortal, and turn invisible thanks to a cloak developed by the late Dr. Jennings.

This origin made for some compelling moments of angst, wherein NoMan regretted his lost humanity and wished to be normal again. In a couple stories, both in T.H.U.N.D.E.R. Agents, this resulted in drastic action, like the time he kidnapped a young woman in the hopes of marrying her and thus feeling more human — this despite the fact that he is really in his 70s. Kidnap someone your own age, you creep.

(I am kidding. Do not kidnap anyone.)

This is the weakest link in the T.H.U.N.D.E.R. Agents universe. It had nothing to do with the rest of the books, except a tortured acronym. (U.N.D.E.R.S.E.A. stands for United Nations Department of Experiment and Research Systems Established at Atlantis.) It’s lightly implied that there’s a rivalry between the two organizations: when Undersea Agent 1 gains electromagnetic powers in Issue 2, U.N.D.E.R.S.E.A. is happy about it because it means they finally have a superpowered, T.H.U.N.D.E.R.-style agent of their own.

Undersea Agent 1 (and, for all intents and purposes, the only Undersea Agent) is really Lieutenant Davy Jones, who is stationed at an underwater base (in Atlantis, natch). From there, he and his borderline-useless sidekicks fight aliens, innocent wildlife, and would-be world conquerors with names like Doctor Fang.

I’m not showing you Doctor Fang because he is a bad, bad racist caricature. While the T.H.U.N.D.E.R. Agents franchise isn’t awash in overt bigotry, it is the ’60s, and it does come up now and then. So if you want to experience the franchise without that risk, you might want to stick with the reboot.

Yes, There Was a Reboot

Several publishers have tried to revive T.H.U.N.D.E.R. Agents over the years. Perhaps the most high-profile attempt was DC’s, which came out in 2010. Unfortunately, this reboot was written by Nick Spencer, the same genius who would go on to make Steve Rogers a Nazi while mocking trigger warnings and other hallmarks of left-wing activism.

Needless to say, Spencer’s involvement dampened my interest in the reboot immediately, and I only read the first three issues to get a feel for what it’s like.

It was fine, I guess?

They went the Mission: Impossible route of setting things in the present day and discarding most of the original cast in favor of new characters. I find this approach irritating, which is why I never watched beyond the first Mission: Impossible movie. On top of that, they darkened the premise considerably: every agent’s powers are now slowly killing them instead of just Lightning’s. This isn’t implausible, given how little they knew about Dr. Jennings’s inventions going in, but I didn’t care for this dark interpretation of the source material. So even if I didn’t dislike the writer, I would have bailed on the T.H.U.N.D.E.R. Agents reboot pretty fast.

But hey, the Mission: Impossible movies and dark comics are wild successes, so clearly my taste in such matters is questionable (or at least unmarketable). And to be fair, the reboot did some things better than the original — for example, by getting into the new Lightning’s head and really exploring the implications of his life-shortening speed.

For now, the T.H.U.N.D.E.R. Agents are once again dormant: the last pseudo-reboot attempt was in 2015, when DC introduced Agents of W.O.N.D.E.R., an alternate universe version of the team. Is this finally the end? I hope not. As evidenced by the franchise’s long afterlife, it has a lot of engaging characters and concepts to work with, and I personally think they have yet to reach their full potential. However, I must insist that any future reboots bring back the Weed Wagon.