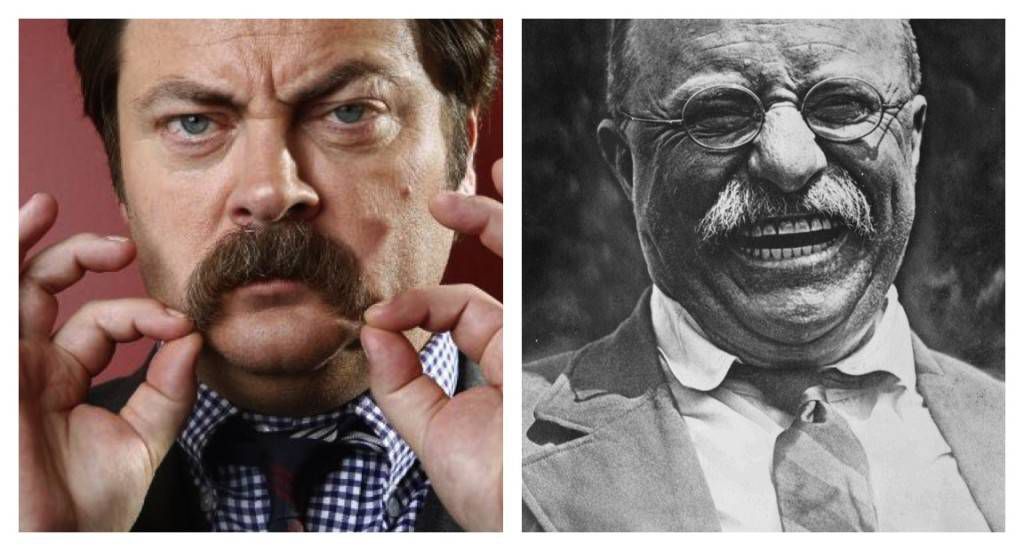 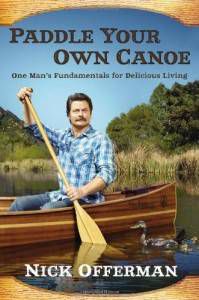 My job entails a lengthy commute. This has been bad for my feelings of gentleness and compassion toward my fellow humans, but great for my audiobook habit. I’ve listened to a whole host of different types of books over the last several months, and have settled into something of a groove lately – listening to books by comedians.

My favorites of these – as much because of their author’s performance while narrating them as their content – have been Nick Offerman’s two books, Paddle Your Own Canoe and Gumption: Relighting the Torch of Freedom with America’s Gutsiest Troublemakers. Nick, of course, is a funnyman par excellence known best for his role as the mustachioed libertarian carnivore Ron Swanson on Parks and Recreation (which, sadly, has ended its run, but which lives on in the streaming devices in our hearts).

The first of these volumes is essentially Offerman’s autobiography, although it doubles loosely as a homespun self-help book sprinkled with topical essays. Despite Offerman’s assurances that, in real life, he’s not Ron Swanson (don’t listen to him; he is Ron Swanson), it basically reads like Ron Swanson’s treatise on a life well lived. Gumption, on the other hand, retains Offerman’s gruff, no-nonsense approach, but applies it to short, appreciative essays about a number of great Americans, many of whom – Jeff Tweedy and Laurie Anderson, for example – wouldn’t likely find themselves lauded in any history book. He celebrates presidents, abolitionists, a first lady, performance artists, a film director, an architect, and a late night TV host, just to name a few.

Both books are hilarious, and I’d bet that, given Offerman’s quality performance as their narrator, audio is the optimal format in which to enjoy these fine works. Unfortunately, there isn’t any more enjoying to be done at the moment, since Paddle and Gumption are Offerman’s only two works. He may be hard at work on a third one for all I know (although, to hear him tell it, he’s probably in his wood shop or putting on a play somewhere or working his way through the Kama Sutra with his wife, Megan Mullally).

But just in case Ol’ Nick needs to jump start his creative process, I have a few ideas about what his next project should be. I would enthusiastically read the following hypothetical books, because they would be un-hypothetically amazing.

A music-centric coming-of-age novel. Nick Offerman comes from a small, rural town in Illinois, and when he went off to college at the University of Illinois, he was smacked in the face by the sheer volume of cool music he’d missed out on over the years. In an age where anybody can use the internet to essentially find and listen to anything they want, whenever they want, this sort of story has a novelty to it, while the coming-of-age story is perfectly universal. I figure Offerman could parlay his considerable comedic gifts and his period of musical discovery into a fine, funny new adult novel, or even lower the age of the protagonist into YA territory and funnel the musical discovery through an older cousin or something. I imagine Eleanor and Park, but with more pot smoke and fewer abusive step-parents.

A satirical biography of Teddy Roosevelt as written by Ron Swanson. After listening to Offerman talk about the reverence he has for Parks and Recreation‘s creative team and his fellow actors, I doubt Nick Offerman would ever again fully inhabit his greatest role without their involvement. That said, he should totally do it. The real Offerman loves Teddy Roosevelt and the bulk of what he stood for – conservation, self-determination, facial hair – but Edmund Morris’ biographical trilogy has probably eliminated the need for any further peaks behind the proverbial TR curtain. The solution? Create something altogether different: a Colbert Report-style mock-biography written from the government-fearing, bear-wrestling perspective of Ronald Ulysses Swanson, the man who strove to meet Roosevelt’s ideas of masculinity and meaning. It would play up Roosevelt’s achievements and personality just as Parks and Rec exaggerated Ron Swanson’s, while also allowing Offerman the chance to subtly mock the 26th president’s backwards attitude toward most people who weren’t white male Americans.

A How-To book on all the things I was too busy playing video games to learn how to do while growing up. I am not the most handy person you’ll ever meet, but I am the least handy person you’ll ever meet. Basically, if it’s any more involved than screwing in a lightbulb, I’m not your man. But if Nick Offerman were teaching me, I bet I could learn. Who else is going to be able to instruct us how to, say, build a book case, repair a lawnmower, or catch, clean, and cook a fish with such a combination of hilarity and vigor? Nobody, that’s who. Title suggestion: This Will be No Fun at All, taken from the last line of the “Pawnee Rangers” episode of Parks and Rec, where Ron starts his own troop of hard-nosed scouts known as “Swansons.”

I’m not saying I’ll never forgive Nick Offerman if he neglects to write another book. All I’m saying is that I’ll be crushed and disappointed and take it as a personal message that the artist formerly known as Swanson doesn’t want me to be happy. It’s cool. Whatever.

In seriousness, I really hope Nick takes on another writing project of one kind or another, even if it isn’t one of my (brilliant, guaranteed bestseller) ideas. In the meantime, word came down yesterday that Mr. Offerman himself is bringing his humor-type show to the University of Kentucky, my alma mater (it’s March now, so I’m mandated by the fine print on my degree to mention that I went to UK). Looks like I’ve got some tickets to book.