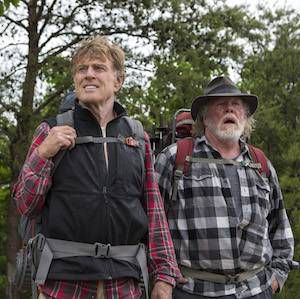 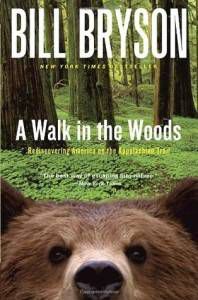 A little context: A Walk in the Woods: Rediscovering America on the Appalachian Trail was published in 1998 and tells the story of Bill Bryson and his larger-than-life (literally and figuratively) buddy Stephen Katz as they attempt to hike the 2,100 mile long Appalachian Trail (AT). The book is funny, informational, and basically just quintessential Bryson. Even though the pair don’t make it even close to the whole way this is the most famous AT-associated book.

The A Walk in the Woods film has hit a number of roadblocks. In 2005 Robert Redford decided that he was going to produce a movie version with himself as Bryson and Paul Newman as Katz. However, Newman wasn’t so excited about all the weight he would need to gain in order to play Katz so the project stalled. Then Newman died, which further put the project on hold. Then the project was delayed again during a 2008 writers strike. Things have finally come together and the movie has been made with Nick Nolte as Katz instead of Newman and the first trailer has been released:

Some collected thoughts on the trailer:

The stars are a bit confusing.

I realize that Redford has been the driving force behind the movie since 2005 but doesn’t he not look or sound *anything* like Bill Bryson? I’ve listened to several Bryson audiobooks read by the author and seen a few talks by him and he has this sweet, soft, British-y sound and Redford, just, um, does not. Nolte, on the other hand, seems to fit pretty well as Katz.

Except for the fairly obvious fact that both men are completely the wrong age for the part. Bryson was in his early forties when he did his AT hike and Redford is currently 78. That is a pretty big difference. Bryson is currently 15 years younger than Redford and he wrote the book almost two decades ago. Nolte is 74, still pretty far out of range. So far out of range that I guess they aren’t even pretending? I guess the film is just rewriting the story as two guys in their 70s hiking the AT?

The supporting characters, on the other hand are FABULOUS.

Nick Offerman as a snarky REI employee outfitting Bryson for the hike!!

Kristen Schaal as the annoying woman from the trail!!

Did I mention Nick Offerman?? I am so there for that.

Some things are missing from the trailer.

The book is a lot more than just a story about Bryson’s hike, it is also a delve into the history of the AT and it has a strong message of environmentalism and conservation. Will the movie touch on any of this? It is unclear.

Also, the trailer is rather glaringly missing any kind of diversity. True, many of the characters in the book are white, but if we are already completely changing the ages of the main characters, I would argue that the script should likewise be updated to include more diverse hikers.

The issue of diversity on the AT is an interesting one that is not much mentioned. The AT Conservancy lists “Encourage a diverse population…to enjoy the Trail.” as one of its 2015-2019 goals but it isn’t clear how much diversity exists currently on the trail or how this will be addressed.

On Episode 35 of the Pox & Puss Podcast, a highly inappropriate, highly entertaining AT-focused show, the host briefly interviews a black woman who is hiking the trail in 2014. She discusses being one of five black hikers she knows of on the trail at the time, the questions she gets on the trail, and even Southern towns that she is actually warned away from stopping in.

I would really like it if the movie didn’t paint such a limited picture of the kind of person who hikes the AT.

Moving beyond the trailer.

It will be interesting to see how the movie impacts the AT itself. The popularity of Cheryl Strayed’s book Wild: From Lost to Found on the Pacific Crest Trail and the movie version starring Reese Witherspoon caused an influx of hikers on the Pacific Coast Trail (PCT) dubbed the “Wild effect.” The PCT Association was forced to implement a permit system for hikers, limiting the number of people allowed to start the trail each day.

The AT currently has no such mandatory system, although it does have an optional hiker registration, so it will be interesting to see if the release of the movie changes that. The AT did reportedly experience an increase in hikers after the release of the book in 1998, so perhaps the movie will have a similar effect. An increase in popularity may bring more attention to conservation and funding for the trail, but as the trail gets more crowded there are environmental issues to consider.

What do you think of the trailer? Will you be seeing the movie?