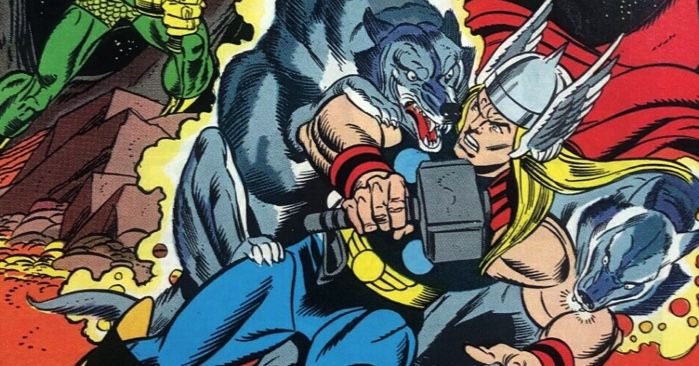 Most of us only get to wear funky costumes and burst into strangers’ homes on Halloween. Superheroes do that every day. So what do heroes do to commemorate the season?

In Thor #207, Thor spends Halloween of ’72 beating the crud out of some demon dogs and doing his brother grievous bodily harm, all in the picturesque town of Rutland, Vermont. The location may seem a little random, but it is actually a critical part of the story, so much so that I had better tell you about it before we go any farther.

Come and Listen to My Story ‘Bout a Man Named…Tom

Okay, so Rutland has this famous Halloween parade, and back in the ’70s, it was run by a man named Tom Fagan. Fagan was a giant nerd who made the parade a success by incorporating popular superheroes and inviting comic book creators to participate. At some point, everyone thought it would be funny to feature the Rutland Halloween Parade in a comic. Or rather, several comics: the parade was the focal point of unofficial DC/Marvel/reality crossovers throughout the early ’70s, which explains why you can clearly see two guys dressed as Batman and Superman at the start of Thor #207…

…and why the story starts not with our thunder god, but with Avengers writer Steve Englehart, Thor writer Gerry Conway, Thor colorist Glynis Wein, and Justice League of America writer (and Glynis’s then-husband) Len Wein. They’ve all come to Rutland to visit Tom, but something about him seems…off.

Before we figure out what’s up with Tom, we have to pick up a plot thread from last issue.

Now Back to Your Regularly Scheduled Action Sequence

From afar, Loki manipulated Thor’s old nemesis, the Absorbing Man, into attacking him. Before their battle could end, Loki instructed Absorbing Man to come to Rutland, and Thor followed. He brings two Asgardian friends with him, but when they find Absorbing Man, Thor insists on fighting him alone because he is A REAL MAN, and taking advantage of readily available resources is for SISSIES.

Thor eventually wins by, uh, accidentally killing him. Don’t worry, he’ll be fine. Thor barely has time to get all philosophical about his foe’s demise when Loki finally shows up.

He’s been a busy little god of mischief, too. After invading Tom Fagan’s house, he took control of Fagan’s dogs, fortuitously named Satan and Diablo. Then he zaps the life force from a bunch of party-goers (including Glynis Wein) and concentrates it in a magic flaming sword. That sounds epic, but mostly they spend the fight screaming stuff like “DAD ALWAYS LIKED YOU BEST.”

Thor’s heinie is saved by Sif, one of the friends whose help he rejected earlier. She makes a deal with a convenient passing sorceress (but that’s another subplot), who makes it rain. Thor, being the thunder god, takes advantage and destroys Loki’s sword with a lightning bolt. This also blinds Loki, who panics and runs off a cliff.

Yeah, this isn’t the best Halloween special ever. There’s a lot going on, and the Halloween theme gets a bit lost in all the fighting, which takes place far away from the costume party. They could have at least stuck a jack-o-lantern on Thor’s head or something.

Not quite. A few months later, Loki, still blind, appeared in a crossover event featuring the Avengers and another superhero team called the Defenders. Loki had agreed to serve the interdimensional demon Dormammu in an ill-fated world domination attempt. Things went especially wrong for poor Loki: he regained his sight by accident, only to have his brains scrambled, leaving him helpless.

Thor, ever the compassionate brother, made plans for Loki to live at Avengers Mansion. The execution of this plan was interrupted by Avengers #119, another very goofy Rutland Halloween special. This issue ended with Thor arranging for Loki to live at Tom Fagan’s house (yes, the same Tom Fagan that Loki almost killed), with the entire town of Rutland chipping in to look after him.

Honestly, where is my comic about this??? How much better would it be to watch Loki learn how to milk goats than to watch him turn evil for the tenth time? Or having him help paint a float for the parade? Or tending to a flower garden as the town gossip tells him about everyone in town?

You know what, never mind. Loki is in the public domain, so this idea is mine now. Your loss, Marvel. Happy Halloween, kids.