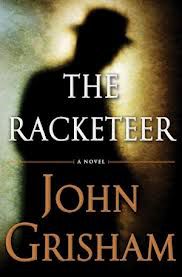 We’re back with another round of “They Reviewed,” Book Riot’s version of HeTexted. In HeTexted, the idea is analyzing the text message a guy sends a girl and figuring out what kind of relationship that brother wants with that sister based on the content of his electronic correspondence. Same deal here, with reviewers and books.

On deck this week, Mark Z. Danielewski’s new novel-installation-art-gallery-piece-social-experiment-literary-manifesto-book-thing The Fifty Year Sword (I’m not just being silly, the book, according to the review “…previously appeared in small, private printings and as a live shadow play.” WHAT? Wait. WHAT?) and THEN John Grisham’s fifty-billionth book The Racketeer. Happy fifty-billionth book anniversary, Grisham! 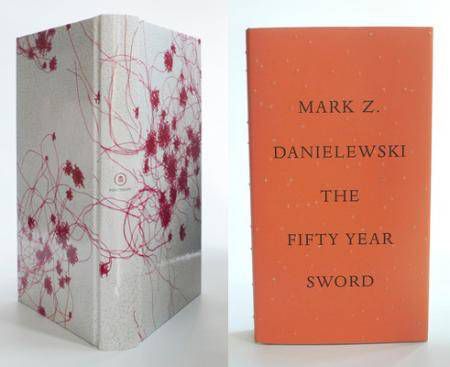 …its arrival as a proper book again looks more complicated than it turns out to be, and that’s a good thing.

That’s a win. That’s going from “That girl has crazy eyes” to “That girl’s eyes are always flashing and darting around but ONLY BECAUSE she’s busy thinking about how she has to run to the lab to check on how her cancer cure research is going before she dashes off to the library to teach the illiterate homeless the alphabet.”

“The Fifty Year Sword” is buoyed by Danielewski’s deft hand with weird detail, not his rainbows of punctuation and enthusiasm for the tab key…

This is such a literary “I love how you get cold when it’s 71 degrees out. I love how it takes you an hour and a half to order a sandwich.” Oh, Daniel Handler, you straight-out-of-a-rom-com book reviewer! You don’t need all of Danielewski’s weird color-coded chapters and crazy indenting! You love the book for its STORYTELLING. I need eight handkerchiefs to sniffle into right now.

“The Fifty Year Sword” is a successful piece of experimental fiction, but I just can’t shake the urge to ask its creator if he might please stop experimenting.

Oh, you went from Rom-Com Book Reviewer to Disapproving Professor Father Figure. That artery-slashing statement withstanding, it’s still cute that you want The Fifty Year Sword to stop trying so hard and just be itself.

Was Handler THAT Into The Fifty Year Sword? He was, but he was also like “Can you please take off your Las Vegas showgirl three-inch eyelashes and ten-inch whore heels and just come cuddle on the couch with me already?” I mean, come on, AWWWWWWWW.

Also, if you don’t know, Daniel Handler is “Lemony Snicket,” so you have to imagine Mark Z. Danielewski and Lemony Snicket cuddling on a couch together. If you are familiar with both these literary figures, tell me your chest is NOT exploding into cartoon hearts right now.

But as in any decent thriller, that’s not all there is to the story

This is where nitpicking gets so much fun/borderline insane. So out of all the adjectives Memmott could have used to modify “thriller” she goes with “decent.” So we get all these other glowing words of approval about the book:

The best thing about “The Racketeer” comes, in part, from an appreciation for the time and calculated thinking that Grisham, the author of more than a dozen legal thrillers, has invested in his clever, twisty plot.

Few people, if any, will figure out what Bannister is really up to until Grisham neatly ties it up with a bow in the closing pages.

This is the kind of story that built Grisham’s reputation as a lion of the literary thriller. “The Racketeer” is guilty of only one thing: keeping us engaged until the very last page.

But am I the only one that gets tripped up with the bit about “any decent thriller.” I know you can be A SANE PERSON and go “Well Memmott’s setting the bar at decent and we can assume she thinks that Grisham’s latest is more than decent. BUT DOES SHE?  “Clever and twisty is good” and “engaged until the very last page” is very good, but is all that MORE THAN decent or DA DA DUHHHHH…merely decent.

Was Memmott THAT into The Racketeer?

I think their relationship is DECENT on the surface, but I don’t know, if I found out she was having an affair with Gone Girl on the side I would be THE LEAST surprised.