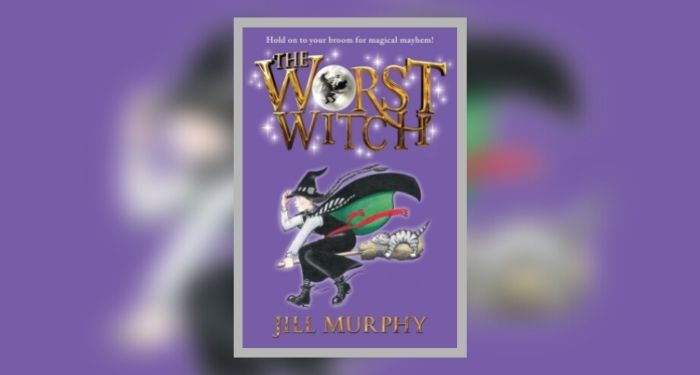 If you’ve been enjoying The Worst Witch on Netflix for the last few seasons, it may come as a surprise to you that the show has a long history, starting with the publication of The Worst Witch in 1974. Author Jill Murphy’s first several books in the series came out while I was learning to read, so I’ve been a fan of Mildred and her magical shenanigans for essentially my entire life. Her books set the tone for everything I look for in a witchy story.

As a child of the ’80s, my media consumption was dominated by the introduction of cable TV, Star Wars, MTV, and a VHS machine that could record movies off HBO. My parents quickly realized that cable was 1) very expensive and 2) did not allow for any oversight of what my brother and I might be watching — parental controls were yet to be invented, much less available — so our experience with cable television was short-lived. If I’m remembering correctly, it really only lasted as long as it took for the Chicago Bears to win the 1985 Superbowl and then until the end of the contract with the cable company.

All that is to say, when I was 7, I desperately wanted to go to witch school. Specifically, I wanted to attend Miss Cackle’s Academy for Witches, to be presented with a brand new black kitten, to fly on a broom, and to add pond weed to a laughter potion thereby accidentally making myself invisible. I longed to be Mildred Hubble, the worst witch at Miss Cackle’s. A witch so terrible at being a witch that instead of the regulation black kitten, she ended up with a tabby.

In 1986, just before our cable access ended, the movie version of The Worst Witch was released, and my parents taped it for me. Now, I am going to stray from this particular text for a moment, but it’ll all come back. Every little girl I knew in my age group in the early ’80s was ob.sess.ed. with a little movie called Annie. There was a nationwide search for the perfect title character, and the cast was — I learned much later — crammed FULL of grown-up stars. Lines from that movie find their way into my regular vocabulary 39 years later; my pinned tweet is a bastardized line of Miss Hannigan’s, played to absolute perfection by the unparalleled Carol Burnett. Tiny me was also obsessed with The Wizard of Oz, both the books and the movie. So when the incredible creepfest that was Return to Oz was released in 1985, I promptly lost my marbles.

What connects all of these things, you ask? If you do not yet know, then I deduce you are probably not a late Gen-X female. Return to Oz and The Worst Witch both star a young Fairuza Balk, who was destined to later be a model for teenaged me when she played Nancy Downs in The Craft. And my first screen crush is in both Annie and The Worst Witch in the form of one Timothy James Curry, otherwise known as Rooster Hannigan, The Grand Wizard, and (again, fast-forwarding to my teen years when I discovered The Rocky Horror Picture Show) Dr. Frank-n-furter — A Scientist. And thus was my penchant for unattainable actors cemented, much to my own dismay.

But before all of that, there was Mildred Hubble and her adventures. One of the things I dearly love about Mildred is that she is imperfect. Not just in the sense that she’s bad at magic, but in the sense that she can be goaded into bad behavior, just like anyone. When Ethel, the resident mean girl goody-goody, dares Mildred to turn her into a frog, Mildred does it. Well, she accidentally turns Ethel into a pig instead, but you get the idea. Mildred’s difficulty with magic is that she’s absent-minded and accident prone, and also seems to have performance anxiety. When she is being tested, she makes mistakes, but when the stakes themselves are high — like when Miss Cackle’s evil sister Agatha tries to take over the school — Mildred and her spellcasting come through and save the day.

Murphy passed away in August of this year, after a writing career that spanned 5 decades. She began writing The Worst Witch when she was 15, and published it when she was 24, in 1974. She went on to write seven more books starring Mildred Hubble, along with a very respectable list of picture books and two novels. The latest book in The Worst Witch series, First Prize for the Worst Witch, was published in 2018. Her charming characters made a deep impression on several generations of readers, and for some of us, set us up for the wizarding worlds to come. She introduced us to witch school, to being the magical underdog, and the importance of friends.

And of course, she is the reason we have this gem to look forward to every Halloween — or whenever you need a little psychedelic Tim Curry in your life, which is basically all the time.

Thank you, Jill, for everything you did for me and thousands of other children. This Samhain, we lift our glasses to your memory.