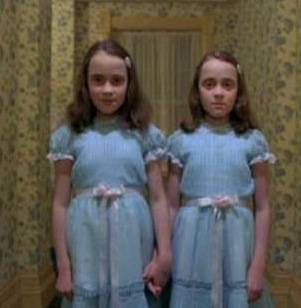 LH: So, today we’re here to discuss children in fiction for grownups. First, let me just say that, while not opposed to them, I am not a fan of kids in books. But there are several great child characters that I love. I will start with Merricat from We Have Always Lived in the Castle – I read it when I was 10 and just loved her. I even wanted to be her a little bit, which if you’ve read the book, is…frightening. Have you read the book? TELL ME YOU’VE READ THIS BOOK, REBS!

RJS: Oh god, here we go again. No, I haven’t. I don’t think I blaze through books quite as quickly as you do. I have it on a pile somewhere–that has to count for something, right? PLEASE DON’T BREAK UP WITH ME. Have you read Alan Bradley’s Flavia de Luce books? I know people have mixed feelings about precocious child narrators, but I loved her. Hard not to love a little girl with an encyclopedic knowledge of poisons, if you ask me.

LH: Zomg, yes! I love her, too! *chest bump* Flavia was definitely on my list of awesome kid characters to mention. The Flavia books are perfect mysteries for people who like cozies. And speaking of mysteries, one of the best series out there is the Jackson Brodie series by Kate Atkinson. She is an amazing writer, and in the latest, Started Early, Took My Dog, she includes a sweet, funny little girl who plays a big part in the story. And there’s also a fabulous dog, too.

RJS: I’m not even going to tell you how many unread Kate Atkinson books are on my piles, or we’ll have to title our next installment “Shame-Reading with Liberty and Rebecca.” What did you think of The Curious Incident of the Dog in the Night-Time? (I’m going to proceed under the assumption that anything I’ve read, you’ve read twice.) I have fond memories of it, but I think I was more impressed by Haddon’s giving voice to an autistic narrator than by the fact that the narrator was a child.

LH: I thought it was great, even though the part about the dog made me sad. The thing I dislike so often about children in adult fiction is that they don’t give them enough credit. They’re frequently so stereotypical, which makes them annoying. Have you read Extremely Loud and Incredibly Close? A lot of people found Oskar, the quirky 10-year-old narrator, a bit too much, but I liked him. One book I haven’t read, but heard has also a great precocious narrator, is The Last Samurai by Helen deWitt. I have it, I just haven’t read it. I think my copy is now older than Dakota Fanning.

RJS: I think you’re right about writers not giving child characters enough credit (see how I’m dodging your question about the Foer novel?). I think we’re often so nostalgic about childhood–about how innocent and free we remember feeling–that we choose that idea over reality. It’s a nice delusion, but it can break a book. Emma Donoghue’s Room is one example of that for me. I couldn’t buy the voice, so I never got invested. It’s generally difficult to sell a child narrator’s voice at all, but when the kid is five? Fuhgeddaboutit. I much prefer stories told from a child’s perspective with an adult’s voice. I’m reading Swampandia! right now, and Karen Russell does it beautifully. (Also, it makes me really happy that there’s an exclamation point in the book title.)

LH: Lily King does a beautiful job writing a child character with an adult’s voice in Father of the Rain – Daley is so wise for her age, but at the same time, she’s making heartbreaking decisions that we as adults know will haunt her later. One of my favorite handsells, and a book that deserves more attention, is A High Wind in Jamaica by Richard Hughes. It came out in 1929, and was originally published in the States under the title An Innocent Voyage, which is ridiculous, because there’s nothing innocent about it. It’s about young siblings that are kinda-sorta kidnapped by pirates, but it turns out, the children are really the fiercer creatures of the bunch. It’s a fantastic book, a look at just how cruel and unsentimental children can be. I love this book with the heat of a thousand suns. New York Review Books Classics published an edition a few years back – one of the many, many reasons why I love them.

RJS: It’s probably unfair to do this to the rest of the contenders, but I don’t think we can have this conversation without talking about Scout Finch. Is it me, or has every writer of a child narrator just been trying to compete with Harper Lee for the last 50-some-odd years?

LH: I wouldn’t say every writer. I would say the ones who do not try and copy Scout write better books, though. Plenty of novels have children with an original voice. I read Jesmyn Ward’s Salvage the Bones a few weeks ago – there is an amazingly strong young character. And what a book!

RJS: Okay, maybe not ALL writers. But Scout is, to my mind at least, the gold standard. And now a burning question: is Owen Meany a child character? In general, how do you classify characters who start off as children but grow into adulthood within the narrative?

LH: Hmmm, good question. I think he qualifies as a child character, for the parts where he’s small, er, young. Daley is only a child for half of Father of the Rain. The question with Owen, and with other child characters, like Mattie Ross in True Grit, is if the narrator is reliable. Is the narrator every truly reliable? Is Owen as brilliant and strange and as attuned to his surroundings as John remembers? Is Mattie truly sure of all the details of her story, decades later? Am I overthinking this?

RJS: No, those are all good questions (says the girl who loves to over-analyze). Let’s talk about narrative stuff next time!

For now, you tell us: what’s your take on child characters in adult fiction?