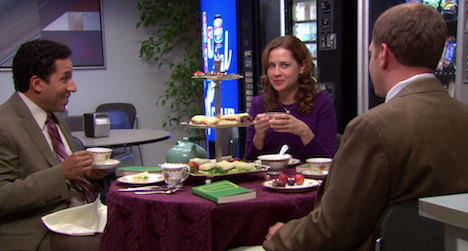 At Dunder Mifflin, the fictitious paper company featured in The Office, there are a number of clubs that workers can join. These include The Party Planning Committee, Kevin’s Band, and Dwight’s task forces for safety and anti-flashing. The one club that is “exclusive” is The Finer Things Club. Founded by Pam, Toby, and Oscar, the club “meets once a month to discuss books and art, to celebrate culture in a very civilized way.” According to Pam, “There is no paper, no plastic, and no work talk allowed.” Oscar also chimes in, “Besides having sex with men, I would say The Finer Things Club is the gayest thing about me.”

The club meets in the break room to discuss such works of literature as Memoirs of a Geisha, A Room with a View, and Angela’s Ashes. The members dress in costume and prepare appropriate sundries for each book. They deal with interruptions, from Kevin wrestling with the vending machine to Phyllis popping popcorn in the microwave, but still look forward to their monthly, exclusive meetings where the tables are covered with cloths and finger sandwiches are served on china plates.

What would happen, though, if The Finer Things Club let in some other members? What book would he or she choose to read and discuss with those in the office? 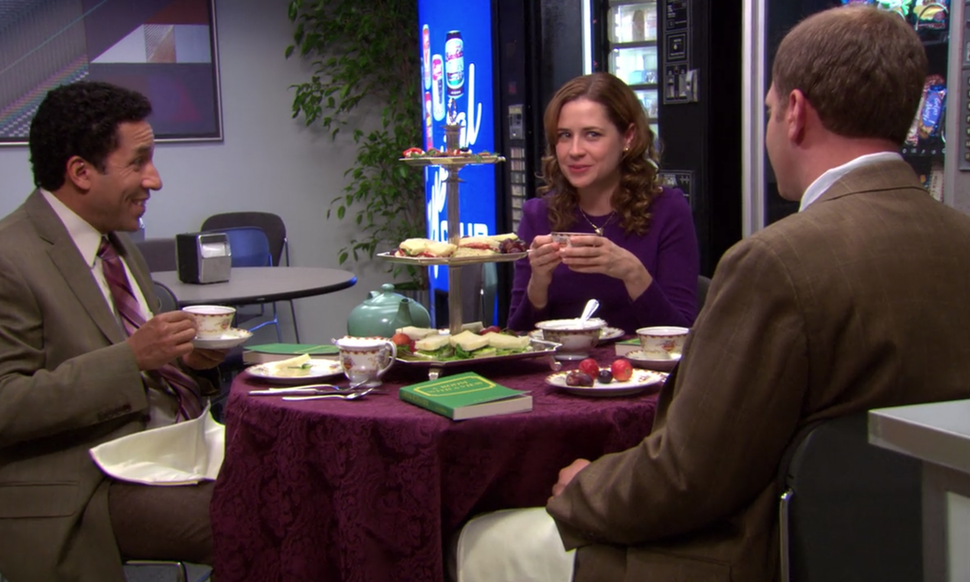 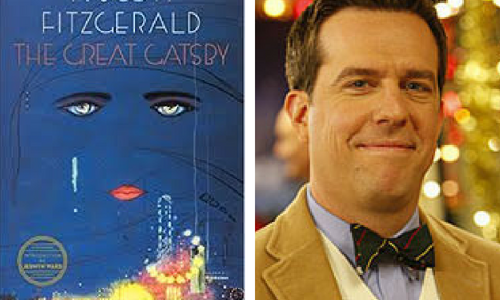 Andy is always quick to point out that he attended Cornell University. He would relate to Nick Carroway and the fact that he attended Yale. Andy would also approve of the New England setting and the posh parties. He read this one at Cornell in an American Literature class. Did you know he went to Cornell?

Phyllis – A is for Alibi by Sue Grafton 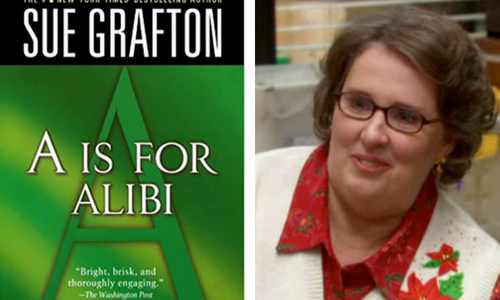 When Michael needed a celebrity for a television ad, Phyllis raced out of the office to ask Sue Grafton, who was signing books at the Steamtown Mall. Anyone who knows about an author signing must be a fan! Phyllis would choose the first mystery in the Kinsey Millhouse series in order to hook her coworkers in the hopes that they would read more. 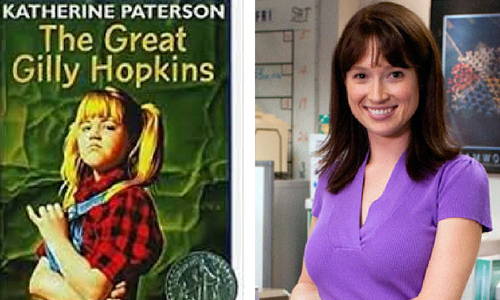 Though Erin is sweet and innocent as the office secretary, she had a rough childhood and was in and out of foster care. Erin would choose The Great Gilly Hopkins to help her coworkers understand her struggles growing up as a foster kid. Like Gilly, Erin also has a special, though very different, relationship with her foster brother.

Dwight – The Lord of the Rings Trilogy by J.R.R. Tolkien 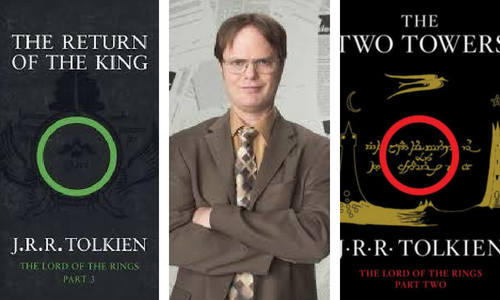 Dwight considered choosing the Harry Potter series, but went with J.R.R Tolkien’s trilogy instead. He knows others in the office will be intimidated with reading three books in one month, yet he cares little for their trepidation. This also gives Dwight an opportunity to dress as a member of The Fellowship of the Ring – or as an Uruk-hai. 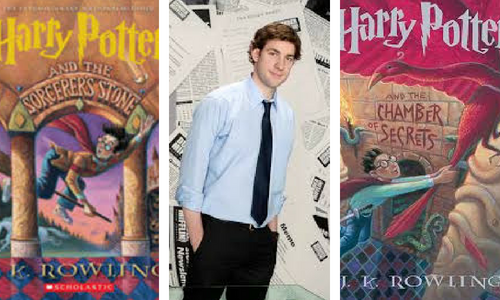 Jim does not expect you to read all seven books in the Harry Potter series, nor is he planning on reading them himself. Instead, Jim picks his books as part of an elaborate prank on Dwight. Choosing Harry Potter gives Jim the opportunity to ask Dwight such questions as, “When does Harry get to Mordor?” and “How many Ringwraiths live in Azkaban?” Jim also knows that Dwight will embrace the wizard garb. There is nothing Jim likes more than seeing Dwight dressed in a “cute” costume. 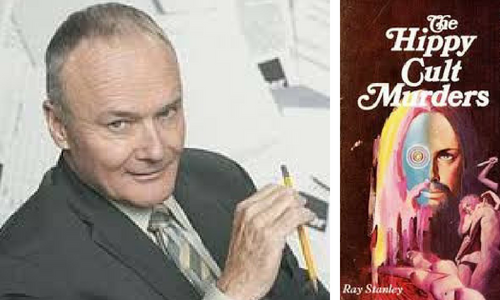 Creed forgot and pulled this book out of his car. It was wedged between the seats. 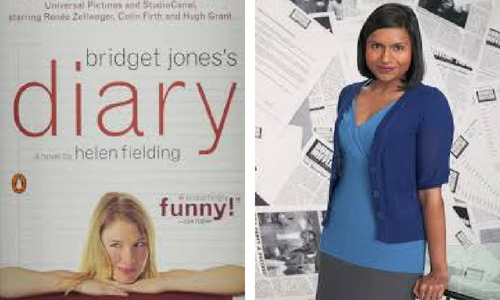 Kelly references Bridget Jones quite a few times on The Office. She sees a bit of herself in Bridget – always trying to loose a few pounds and chasing after men who are not v. good for her. Kelly would insist on leading The Finer Things Club in an English accent. 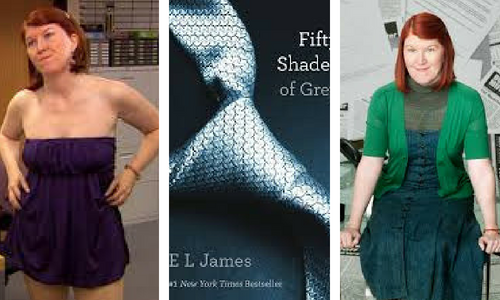 This will be Meredith’s third time reading Fifty Shades of Grey. She would suggest that Jim quote some of the lines from the book to her during the club meeting. Meredith would also insist on making mixed drinks to accompany her pick. 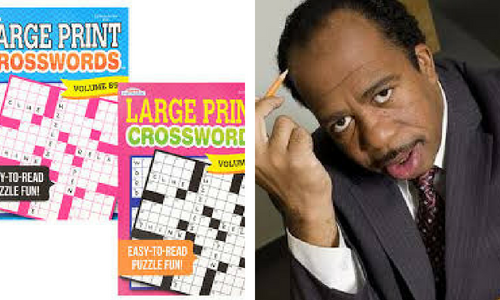 Pass. He will work on his crossword puzzles.

Michael – How to Win Friends and Influence People by Dale Carnegie 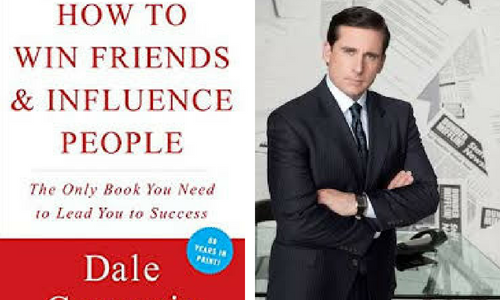 Michael read about this book in The Small Business Man Magazine and feels that he can learn a great deal from it. He hopes that the whole office will read it and then engage in “winning friends.” Michael will be available for all of these friendships and hopes that they lead to lunches out (possibly to Hooters), inside jokes, and dinner parties. This book is a win, win, win!

Daryl – The Audacity of Hope: Thoughts on Reclaiming the American Dream by Barack Obama 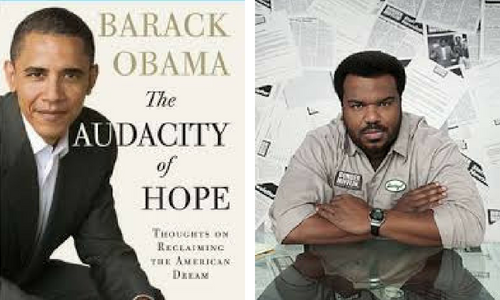 The Audacity of Hope has been in Daryl’s to be read pile for quite some time. He knows Pam, Toby, and Oscar will be excited to read this one too! Daryl hopes that Michael will choose this day to eat an entire family-size chicken potpie and then pass out on his desk instead of attending The Finer Things Club. 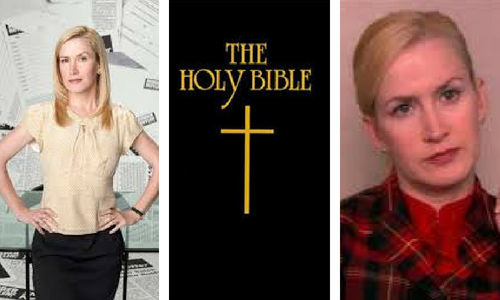 Angela will not attend the meeting. Instead she will judge everyone in the office for not choosing the Good Book themselves. 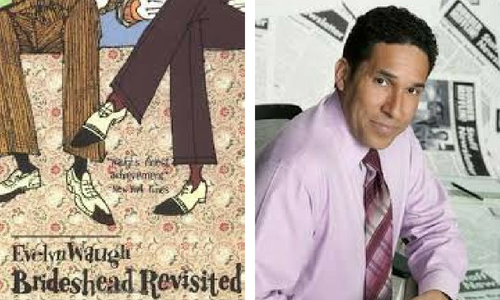 While reading Brideshead Revisited, Oscar felt transported back to the days of the waning aristocracy in England. He would ask questions about Sebastian and Charles’ relationship and would ponder how Brideshead itself acts as a character. 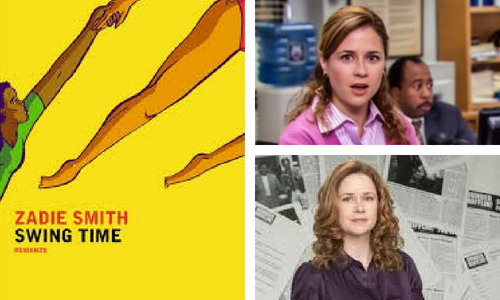 Swing Time follows two friends who dream of being dancers. Pam herself dreams of being an artist and, like the unnamed narrator of the novel, has ideas, but lacks a bit of talent. She hopes to discuss in detail the friendships in the story, as well as the idea of identity. Pam would play classical music, serve African and English food, and relish a novel about self-knowledge.

What would Ryan, Karen, or Kevin choose? Insert your suggestions below the bar – that’s what she said!