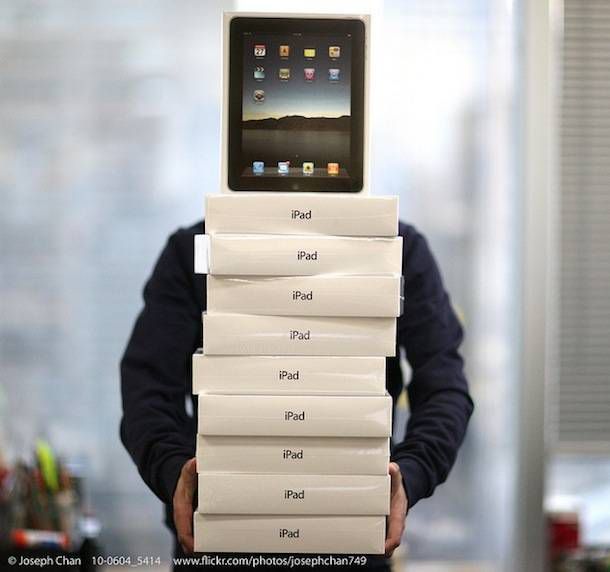 As I wrote last week, I think the iPad represents the future of reading. While writing that review, I had started paying attention to what tech gear my students are carrying around. And, at least in my urban private university, the rate of iPad adoption in the last twelve months has been dramatic.

After the first iPad launched, an occasional student had one in the cafe or the commons. Now, they are everywhere, and I have had to account for them as I prep readings; students want tablet-friendly files. University-wide emails have circulated about how to “make your class tablet friendly.”

In my experience, though, students aren’t using “tablets.” They are using iPads. In my admittedly anecdotal observations, I don’t think I’ve seen a single Android tablet (not counting Nooks, which run a customized version on Android).

A recent survey shows that my observations, while skewed, are part of a larger trend. Tablet adoption among new and soon-to-be college students is exploding. Over the last year, tablet ownership has quadrupled among high school seniors (from 4% to 17%) and tripled among college freshmen (7% to 25%). Of these, the iPad is by far the most popular (60%), followed by the Kindle Fire (26%) and Samsung Galaxy Tab (15%).

And this group isn’t done buying: 20% of the surveyed students who didn’t already have a tablet plan on getting one in the next six months.

While the so-called tablet revolution is at this point probably more accurately described as the iPad revolution, it’s hard to imagine that the iPad will be this dominant in the long-term. Still, the ball is rolling and the changes look to be sweeping.

So even though some see ebook adoption rates plateauing, I think there’s good reason to see this more as a pause. As has long been known, book buying peaks a little later in life, with an average age of 42 in America.

It could well be that ebook adoption among established book buyers is slowing, but what those numbers don’t show is that the next generation of readers is cutting its reading teeth digitally. Whatever remaining friction there is about digital v. print is likely to be washed away when today’s college student is tomorrow’s representative book buyer.