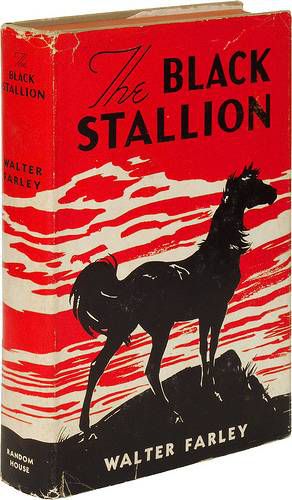 When I was ten I was given The Black Stallion by Walter Farley for my birthday. Rapture! O turf-writer rapture! I was already a horse freak, the more so because I was allergic and could not ride, or groom, or curry-comb, or braid daisies into the hair thereof, or have one live in the bike shed out back as I wanted one too. My dad said no. 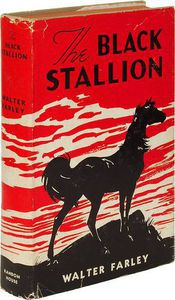 But I lived vicariously through Alec Ramsay (the boy in The Black Stallion) whose mother is incredibly understanding and permissive (one assumes, because The Black saved her son from a shipwreck) and lets the horse live out back, and lets her son train for and ride in a horse race. An actual horse race! Be still my tween horse-freak heart!

I used this a lot to my mom: “But Alec Ramsey’s mother would say yes.” To which my mom would reply, “Alec Ramsay is a fictional character.”

I figured I’d take my hand to the pen, with a bubble-heart-i-font fan letter to Walter Farley, the author. This was how I thought of him: Walter Farley, the author. Of course I understood that people (a vague idea at best) had written other books I liked, picture books, baby books, but this was the first time I realized there was a person, a mind, an author who had made up the story I wanted to renact in my yard, every chance I got with my plastic Breyer horses, and my younger sister in the supporting role of The Black’s pal Napoleon, a old gray.

I could write to an author! And he wrote back, on letterhead that had on it (Vapors! I felt faint!) a silhouette of a stallion, rearing. Walter Farley wrote back, “Dear Elizabeth, I’m so glad you like my books!” He spoke directly to me.