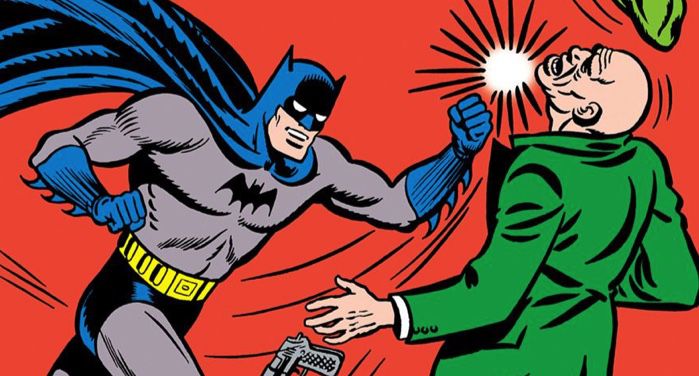 Note: this article contains some outdated and potentially offensive language to describe people experiencing or who have formerly experienced incarceration.

It’s fun watching superheroes put the smackdown on supervillains. But does it do any good in the long run? The baddie goes to prison, and then what? Who’s going to hire the guy who tried to rob the city bank with a pimped-out glue gun? No one! Now this poor villain has no choice but to return to a life of crime. But does our hero care about how Glue Guy can’t pay his rent or afford cat food for the cat that I’ve just decided he has? Of course not! Our “hero” is too busy slamming his fist into Glue Guy’s face and cracking stupid one-liners at his expense! Where is the justice? Where is the humanity???

Worry not, friends. For there is one hero who does care about Glue Guy’s well-being and who wants to help him make a fresh start. Or at least, he cared once. In 1945. Let’s take a look at a story from Batman #28, “Batman Goes to Washington,” and see how that went. (The fact that Batman is still around and punching criminals should give you a hint.)

Time to Rip Off Jimmy Stewart

Our story starts on a surprisingly dark yet goofy note, with Batman using his cape to stop an ex-con from taking his own life.

The rhyming dialogue does not add any gravitas to the situation.

Anyway, meet Danny the Dip. He’s at the end of his rope because, as an ex-con, he can’t get a job. Batman is so moved by Danny’s plight that he goes on the radio to argue on behalf of men like Danny who just want the chance to do honest work. This goes over great with the criminal class, all of whom would happily ditch crime if a legal option was available. It also impresses a U.S. senator, who wants to build a factory that will employ ex-cons. What’s more, he thinks it’d be a swell idea for Batman to bop on down to Washington and express his support. Of course Batman agrees, and he brings with him a handful of ex-cons (Danny included) to help make his case.

Check out the little wagon that Batman hitched to the Batmobile for the ex-cons to travel in. That’s adorable.

But not everyone is pleased at the prospect of helping crooks out of the criminal game. A mob boss named Skye is upset because his flunkies, inspired by Batman’s words, have all quit on him. He tries to kill Batman’s little caravan before they can reach Washington. Batman and Robin thwart his efforts and, upon arriving at the capital, take the ex-cons on a city tour. And check out this AMAZING dialogue.

If you’re wondering what’s up with the ham-handed patriotism, this comic was published a few months before the end of World War II. (Look just right of the Batman logo on the cover. There’s the Red Cross symbol with the words “Needs Your Support!”) Batman isn’t helping Danny and company purely out of the goodness of his heart; he’s also thinking about what a boost the war effort will get if ex-cons are allowed to work in factories.

So, yeah, I lied earlier when I said Batman cared about helping ex-criminals. He doesn’t not care about them. He just cares about stopping Nazis more. Honestly? Fair.

Back in the story, Skye’s men finally succeed in capturing Batman and Robin, and they lock our heroes in an airtight vault. The ex-cons get worried when Batman doesn’t show up to speak at the Senate hearing and, using their pickpocketing and forgery skills, figure out where the Dynamic Duo is being held. But oh no! Skye has returned, and he’s brought guns! What clever ruse will Batman use to defeat this ruthless mobster???

Batman makes it to the Senate in time to give his big speech, and the factory bill passes. Time for more hokey dialogue! I love it!

That sure was a comic, wasn’t it?

I love how blatantly the creators didn’t give a Bat-fig about recidivism. They just thought it was a neat way to get Batman to promote the war effort. And that’s fine. Not every comic has to be that deep. It does make me wonder what happened after the war ended, though. I assume the returning troops wanted their factory jobs back, forcing the ex-cons out of work and back into a life of crime. Thus was balance restored to the universe.

More recent comics (Nightwing #99, for instance, and Spectacular Spider-Man #22, both from the mid-2000s) have taken a more serious stab at the topic of what makes a criminal and how to “really” fight crime. They don’t handle it much better than this comic does. I’m sure there is a way for superhero comics to explore this topic in a meaningful way, but it must be very difficult, since the entire genre depends on beating up criminals in the most entertaining way possible.

The real pity of this comic, of course, is that none of the ex-cons ever appeared again. It would have been fun to see Batman call on them for special assignments. But alas, we must content ourselves with this single adventure.