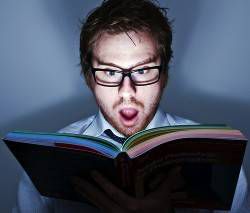 This is a guest post by our current Rioter in Residence, Kevin Smokler. Kevin is the author of forthcoming essay collection Practical Classics: 50 Reasons to Reread 50 Books you Haven’t Touched Since High School (Prometheus Books, Feb. 2013) and the editor of Bookmark Now: Writing in Unreaderly Times, A San Francisco Chronicle Notable Book of 2005. His work has appeared in the LA Times, Fast Company, Paid Content, The San Francisco Chronicle, Publishers Weekly and on National Public Radio. Follow him on Twitter @weegee.

Think back to Catcher in the Rye and ask yourself how many siblings Holden Caulfield had. Let’s see, there’s older brother DB, the screenwriter “out west,” and younger sister Phoebe, perhaps the book’s most beloved character. But just before Holden has that unforgettable meeting with Phoebe on the steps of the Museum of Natural History, he is walking on the other side of Central Park, down Fifth avenue, stopping at each corner and saying “Please, Allie, don’t let me disappear.”

Allie is Holden’s younger brother. All we know is that he has died unexpectedly just before the story begins. Which changes everything. Holden Caulfield might be the iconic bratty teenager. Or he might be like all of us, in the throes of terrible, ceaseless grief.

The iconic blue cover of The Great Gatsby was completed before the manuscript.

Designed by the Spanish artist Francis Cugat (who later had a prosperous career designing posters and graphic material for the movie star Douglass Fairbanks), Fitzgerald was so taken with the image of a woman’s eyes crying a single tear above a city skyline that legend has it the description of Daisy Buchanan as the “girl whose disembodied face floated along the dark cornices and blinding signs” was inspired by it and written into the book.

Maya Angelou Wrote I Know Why The Caged Bird Sings on a dare.

The story goes: In the months after the murder of her friend Martin Luther King, Jr., Maya Angelou accepted an invitation to a dinner party at the home of cartoonist Jules Feiffer. In attendance was Robert Loomis, an editor at Random House. The guests began telling stories of their childhoods. Angelou joined in. Loomis was so impressed that he later told writer James Baldwin, who was also at the party, that Angelou should write a memoir. Angelou, who considered herself a poet and playwright, had no interest in writing her own story and declined. Loomis then told Angelou something on the order of, “I was actually looking for someone to write a memoir as a novel and figured you couldn’t do it. So it’s probably better you said no.” To which Angelou said to herself “I’ll show him!” And did.

The original title of To Kill a Mockingbird was Atticus.

When Harper Lee started wrestling To Kill a Mockingbird into place in the late 1950s, she had two aims: To accurately tell stories from her childhood in Depression-era Alabama and to pay a little tribute to her father. A.C. Lee had been a high-minded attorney who had defended their town’s poor and victimized, a newspaper editor and member of the state house of representatives. Most importantly, he had encouraged his youngest child Nelle Harper’s interest in writing and literature at a young age. And although Harper Lee would change the title at the request of her publisher, Atticus Finch is thought to be inspired by her own father, the story of him and Scout and Tom Robinson and Boo Radley, a thank-you for his honor and support.

John Steinbeck was considered a has-been while he was still alive.

Steinbeck won the Nobel Prize for literature in 1962, and most thought he deserved it about as much as Sister Sledge deserved admission into the Rock n’ Roll Hall of Fame (Quick: Name another hit of theirs besides “We Are Family.”). Steinbeck had a glorious run early on (Tortila Flat, The Grapes of Wrath and Of Mice and Men were all written in his twenties and thirties), but two decades later was considered too West Coast for the New York literary establishment, too popular for academia and snobs, too politically inconsistent for his early champions (the creator of the Joads was also a hawkish on the Vietnam War) and too naïve and sunbaked and mythic about his subjects. Even when he tried to reach with grander, longer fare like East of Eden, critics lambasted it as a bloated pretentious mess.

The New York Times went so far as to say “limited talent is, in his best books, watered down by tenth-rate philosophizing.” Steinbeck, who didn’t think he deserved the prize anytime, never published another work of fiction and died 6 years later.

Jane Austen might have not been read at all were it not for her nephew.

We now hold Jane Austen right up there with Shakespeare and Dickens as one of the greatest fiction writers in the English language. But when she died at age 41, none of her readers knew her name. She had published four novels under the pseudonym “A Lady,” (Persuasion and Northanger Abbey followed after her death, and though her large family invested in her talent–her parents and brother acted as business manager and literary agent to her efforts, and her father insisted daughter Jane receive the same classical education as his sons–they hadn’t counted on her novels outliving her.) That is until 52 years later, when Austen’s nephew James Edward Austen-Leigh published A Memoir of Jane Austen, which relit the flame of interest in Austen’s work. And though it would take until the 1940s for Austen to be studied in academia and championed by other writers, her literary afterlife began with a book-length fan letter written to the “dear aunt Jane” her nephew admired.

Mark Twain has such a hard time completing Huck Finn that he finished three other books in the meantime.

Immediately after the 1876 publication of The Adventures of Tom Sawyer, Mark Twain set about telling the story of Huckleberry Finn, Tom Sawyer’s best friend. It took him 8 difficult years, the majority of his 40s, before Huck Finn was published in early 1884. And though he was already a successful author, living a comfortable contented life, in that time he also finished another novel (The Prince and the Pauper in 1881) and two memoirs about his early life on a riverboat and travel in Europe.

Louisa May Alcott wrote Little Women for the money. And it made her miserable.

As a young writer, Alcott concentrated on lurid pulp stories of revenge, murder, and adultery–“blood and thunder” literature, as she called it–and enjoyed writing very much. She was in her mid 30s when an editor suggested she try writing a book for girls. Alcott wasn’t very interested, but her father was a complete moron with money and had left the family in terrible financial trouble. Alcott wrote Little Women in hopes of some decent sales and a little breathing room and got way more than she asked for. The money in sequels was too good to turn down (and her father didn’t get any smarter with a dime), but Alcott hated writing what she called “moral pap for the young” and longed to return to the smut and violence of her early endeavors.

Lead blocker of absurdism and author of The Stranger, as much a bible to moody teenagers as the albums of The Cure (the band’s song “Killing an Arab” is inspired by The Stranger), Albert Camus himself had it made. Though born desperately poor in French Algeria, Camus grew up a star high school athlete, handsome as a movie star, gregarious, best friends with Jean Paul Sartre, and beloved by his countrymen. He was the second youngest winner of the Nobel Prize for literature, and his death in an auto accident at age 46, Susan Sontag wrote was “felt as a personal loss by the whole literate world.” By all accounts, he was a contented soul, far more resembling your 11th grade class president than the disgruntled loners who read The Stranger in the AV Room during lunch.

When this brilliant, nasty tale of a small town’s annual ritual of randomly stoning one of its citizens to death was published in the New Yorker in 1947, it generated more letters than anything the magazine had ever published. Many wanted to cancel their subscriptions, others wanted to know what happened after the story’s end. A terrifying few asked whether The Lottery was real and, if so, where could they go see one enacted.