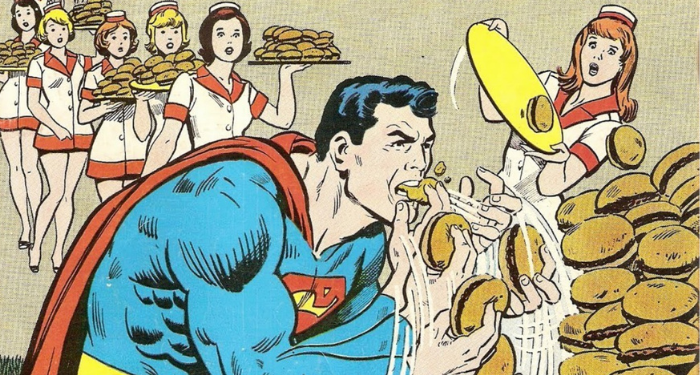 Peeling the plastic off a microwave dinner is normally the extent of my culinary efforts. But for five days, I decided to make an exception.

There have been several superhero-themed cookbooks over the years. I just grabbed the first one I found while searching eBay: The Official DC Superhero Cookbook by Matthew Mead. It was published in 2015, which surprised me. All of the art throughout the book is taken from Bronze Age comics (and the occasional vintage doll/action figure), giving it an older, classic feel.

(I could have bought a shiny new version from Barnes & Noble for $25 or so, but I got this copy off eBay for $4. If you plan on using the stencils in the back, though, you may want to buy new just to make sure they’re clean.)

As you may imagine, this cookbook is aimed at kids, and the recipes reflect that. They’re pretty basic, so even young children can handle them with an occasional assist from a “sidekick”/adult. But hey, like I said, I don’t really cook much, so the simpler, the better. I’m also not any of the fabulous folks behind Cookbook Showdown, so don’t expect pretty food photos either. What you see is what the food will probably end up looking like if an actual child makes it. Consider this a public service announcement.

Things started going wrong immediately this week when I realized that I forgot to get a key ingredient for one of the recipes. So I decided to save that one for the end of the week and made this one instead.

This pasta dish gets its Plastic Man theme from red and yellow peppers (matching the colors of his costume) and melted shredded cheese (which stretches!).

Going by the picture in the book, I didn’t put nearly enough cheese. There should be a shroud of shredded cheese over the pasta. It also looks like they added pepper and parsley, which I also did not put.

In my defense (get used to that phrase), there’s no actual recipe with this one: the book basically just goes “put these ingredients together in this order, it’ll be fun!” It’s a simple dish that your cheese-loving child will probably like, though they might pick out the peppers if they’re fussy. Honestly, I was tempted.

This has nothing to do with Zatanna or magic. They are cute-looking, though. You basically flatten a piece of bread, make an open-face sandwich, roll it up like a Swiss roll, cut it into little pieces, and lance them with toothpicks. What could go wrong?

…Okay, look, the whole time I was making these, my dog was barking incessantly, and then my dad came into the kitchen. Which is all to say that I got distracted and forgot to flatten the bread with a rolling pin as instructed. My dad is actually the one who pointed this out to me…after I’d already spread the whipped cream cheese onto the bread. (I whipped it myself, I’ll have you know!)

Fortunately, my dad was a professional chef and managed to salvage it into something vaguely presentable, or at least edible.

They tasted just fine, though: they’re sandwiches in a different form, which could make lunchtime more exciting.

I think I’ll try these again another day to see if I can do better.

I did some actual baking today! These are pistachio muffins with green icing gel added to make it, well, green. Shout-out to my dad once again for shelling the pistachios.

This one also didn’t go quite according to plan: the recipe says to chop the pistachios before adding them to the batter, and I, uh, forgot.

I’m starting to have a bit of a personal crisis here. I always assumed I’d be decent in the kitchen if I wasn’t so lazy, but maybe I actually just suck at this?

Thank the Guardians, they taste good! A lot like carrot cake, actually.

You will note that it is not green. Despite putting what seemed like an exorbitant amount of green icing gel into the mix, the batter only barely changed color. (The recipe says “add green icing gel as desired.” NOT HELPFUL, SIR.) So just know that, if you make these, you will need to be braver with the gel than I was, or you will need to find…stronger gel? Is that a thing? Maybe try food coloring.

I also changed the topping from what the recipe calls for (on purpose this time). It says to mix sugar and cream cheese for frosting and then put halved green grapes on top. I don’t like elaborate toppings on cake-like foods, and there was already a lot of sugar in the mix, so I just put a little cream cheese, doodled a Green Lantern insignia on top, and that was nice for me.

I could easily eat them plain, too, but if you’ve got a typical kid, they’ll probably like as much sugar as possible.

First thing I did today was try the Magic Pinwheels again. I changed up the filling, though: I put turkey, jelly, and cream cheese to make something approximating an Elena Ruz. My main goal here was to get the pinwheel part right. And I did! Redemption!

Okay, now for the main event. There are several pizza recipes in here, but I picked this one because it involves making a mini pizza out of an English muffin. I’ve made pizza bagels before, but I’ve never heard of an English muffin pizza, so here you go.

Despite a lack of instructions similar to the fettuccine recipe, this one is pretty basic and came out almost exactly the way it looks in the book, except that I couldn’t cut the halves evenly.

We again use red and yellow peppers — this time cut into vaguely star-like shapes — to match the color of the hero’s costume. Peppers serve this purpose a lot in this book, so if your kid hates peppers, maybe find a substitute or just stick to the recipes that don’t use them.

Unless your kid is very young, this probably won’t make a complete meal for them, so you might want to pair it with one of the featured side dishes, such as…

This is the one I wanted to start with. I thought we had corn in the house and it turned out we didn’t, so I had to wait until the next supermarket trip to get some. I was totally prepared for this article.

Also, the title of this dish is a lie: you microwave frozen corn, then sauté it with butter, salt, pepper (the spice), and — you guessed it — peppers (the veggie). There is no roasting going on. How could you lie to me, Ronnie! Or Jason! Or whoever you are now!

In the book, they suggest cutting orange and yellow peppers into triangle shapes and putting them around the corn so it looks like a sun. But if there’s one thing I’ve learned this week, it’s that I don’t like peppers as much as I thought. So instead of wasting peppers, I put the corn on a black plate so it resembles the sun hanging in the bleak, empty wasteland of space. This corn represents man’s eternal solitude in the universe.

Maybe it’s just because I usually eat corn plain, but I liked the combination of flavors in this one. And it was so easy that even I could do it!

I liked how forgiving these recipes were. I botched three out of five, but they still turned out edible, which I think makes The Official DC Superhero Cookbook a fun choice for kids and incompetent novices. Some of the recipes do require actual work, and some are barely recipes (tie a red napkin to a hot dog so it looks like a cape!), but if you’ve got a superhero fan in the house, this is definitely a fun way to spice up mealtime and/or encourage your child to eat peppers.

If you’re looking for more bookish cookbook adventures, check out I Cooked My Way Through a Jane Austen Cookbook. Here’s How It Went.