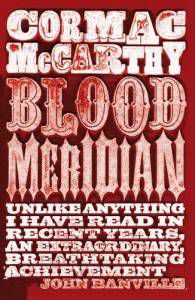 The Insatiable Booksluts were selected as a finalist in our Write-In Giveaway, in which we invited the Book Riot community to submit sample chapters for our book START HERE: Read Your Way Into 25 Amazing Authors. Check it out on Kickstarter and back it if you like it! The winner of the Write-In Giveaway will be the one whose entry reposted on BookRiot.com gets the most Facebook “likes” by 11:59PM EDT, Friday, August 17, 2012. The ONLY way to vote is to click the Facebook “Like” just above this text on BookRiot.com.

If William Faulkner had freaky sex with a Clint Eastwood movie, the offspring might resemble a novel by Cormac McCarthy. His novels swagger, bloodthirsty and relentless, into places that raise the hair on the backs of other men’s necks. His work tends to be approached enthusiastically or reluctantly, if at all; few authors can immediately polarize a group of readers, but McCarthy is one of them. The controversy itself drew me to read him. I thought, what’s the fuss about? After reading his work, I fell into the “rabid fan” category.

McCarthy turned 79 last month, but he’s still writing; in fact, he’s working on a new project. If you haven’t read McCarthy, it’s an excellent time to get caught up before he finishes his latest work. His writing style can be vexing–his creative punctuation, specifically, makes some readers gnash their teeth–but if you stick with me, you’ll be a McCarthy pro in no time. Then, if he ever does win that Nobel, you can say you were already a fan.

(He did win a Pulitzer, though. Sorry. I should have written this post earlier.)

All the Pretty Horses

(Is that cover not the most badass? I already own the trilogy, but I want to buy it again just to have that set of covers. I guess that explains the whole “insatiable bookslut” thing.)

All the Pretty Horses, the first book of the “Border Trilogy,” is a coming-of-age novel that mixes the themes of isolation and evil with the romance of running away from home on a horse pointed toward Mexico. Horses was McCarthy’s first commercial success. “Commercial” often has a negative connotation, and even though it’s a great book, you could certainly call this book McCarthy Lite; that’s why I often recommend it to people who want to dip into his work but might be nervous to do so. It’s a great opportunity to get a feel for his voice and wrestle with his estrangement from quotation marks.

No Country for Old Men

You probably saw this film. I saw it and it blew my knickers off. (The Coen brothers might be my favorite directors after Quentin Tarantino.) This isn’t his deepest or most challenging work; still, the fast-paced No Country keeps you turning pages while probing more deeply into McCarthy’s ethos. McCarthy paints the nature of evil as unavoidable: circumstances lead to circumstances lead to circumstances, and one day, you open your eyes to find yourself at the wrong end of a gun. Reading this book, you’ll venture into uncomfortable places. You’ll get a little bloody.You might feel a chill next time you flip a coin. Getting cozy with one of literature’s psychopathic darlings (er, character Anton Chigurh–not McCarthy) will get you primed to read

Blood Meridian or the Evening Redness in the West

When the New York Times surveyed an impressive list of writers, editors, and critics to name the best American book written since 1980, Blood Meridian placed high on the list–just under winner Beloved and runner-up Underworld. (The Border Trilogy also received multiple votes.) Blood Meridian isn’t for the faint of heart; even having acquired fortitude from the violence in No Country, you’ll still want to brace yourself. The book’s central theme doesn’t revolve around violence, it is violence. There is rape. There is murder. There’s scalping. Laws, there is scalping. Judge Holden, a major character, embodies savagery without conscience. (To me, the judge is The Joker of high literature; he often creates chaos for the sake of chaos and makes war for the sake of war. I can also picture him gleefully murdering Robin.)

McCarthy doesn’t pull any punches when it comes to gory imagery, either. Blood Meridian brings Goya to mind, or Géricault–disturbing, bleak, and often gruesome, but fascinating and with depth.

One could argue, with a fair chance at winning, that Blood Meridian is the McCarthy to end all McCarthys, Oprah’s Book Club be damned. If you have any desire to be an aficionado of 20th century literature, I urge you to add this book to your list sooner than later.

Now, if you’ll excuse me, I have some cover art–er, I mean, books–to buy.