December feels very, very far away right now. Along with my birthday, Chanukkah, and Christmas, it also brings Episode IX: The Rise of Skywalker—which, let’s be honest, is the thing about which I’m most excited. In the meantime, I’ve been watching and re-watching all of the movies (yes, even the prequels) and diving further into the books and comics. There’s already a ridiculously tall stack of Star Wars books and trades on my bedside table and I might as well give in now, because I have a feeling the pile is just going to keep growing. I know there are some amazing-looking books coming out soon in anticipation of the movie—Alphabet Squadron, Spark of the Resistance, and others—but until I can get my hands on those, these will have to do.

One of the many things I love about the Star Wars universe is that there are just so many books and comics—adult, young adult, middle grade, and more —that there is always, always something else to read that I haven’t discovered yet. My only qualm is that although perhaps things are slowly getting better in this area, the authors of Star Wars books and comics skew very male and very white. I think (hope!) this is changing. 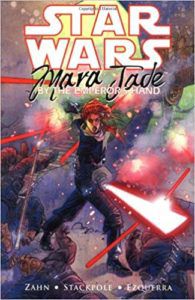 I recently got this trade and just started it. I first read about Mara Jade while reading the original Thrawn trilogy, and I immediately wanted to read more. Someone in a Star Wars group I’m in mentioned this trade and I had to find it. It’s an older trade (1999) from Dark Horse, and though I’m a little wary, I’m really excited to read more about her. Personally, I’m still holding out hope that Mara ends up being new canon. 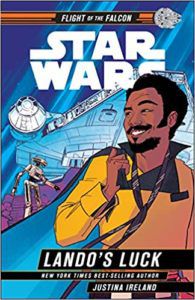 Lando is back in Episode IX, and he’s probably one of the characters from the main trilogy with whom I’m least familiar—so I figured what better way to get some backstory than to start with this middle grade book? In this book, Lando gets caught smuggling and his delivery mission from the queen becomes a bit more complicated when he finds the queen’s daughter is a stowaway on the Falcon. I’ll be honest, though—one of the main selling points for me was that Justina Ireland is the writer. 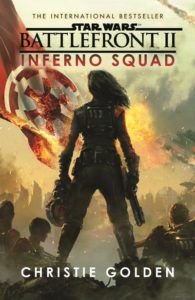 I am a Rebel Alliance person all the way, but had heard such great things about this book when I was at New York Comic Con back in October that I decided to give it a go. Set in the period after Rogue One, this book introduces Inferno Squad, an elite army of the Empire who have been ordered to destroy the Partisans, the rebels once led by Saw Gerrera. I don’t usually like reading about the Empire, but this book is so well-done so far and I’m really intrigued by the characters. Not that I’ll become a fan of the Empire anytime soon… 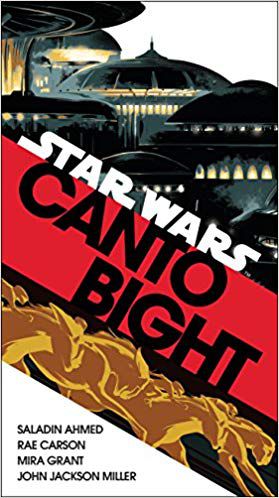 Canto Bight is the city of excess and gambling that was seen in The Last Jedi, where greed and hope collide and anything can happen. This collection of four interconnected stories that happen over one night are a fun addition to the Star Wars galaxy and show a different part of the universe than what I’m used to reading. I don’t normally pick up short story collections, but I am willing to give this one a shot because of Ahmed’s writing and the fact that it’s Star Wars. 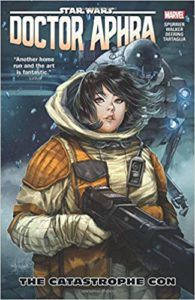 It’s everyone’s favorite sociopath archeologist! Chellie Aphra is a character I’ve really grown to love—smart, wry, and always surprising. This volume has all the drama: war zones, classified information, and even some tricky romance drama when Aphra’s current fling meets her ex. Volume 5 is coming out in late June, so the fact that I’m finally getting to this now ended up being perfect timing.

What are your favorite Star Wars books and comics?