This post originally appeared in Book Riot’s Swords & Spaceships newsletter. Sign up to receive news and recommendations from the world of science fiction and fantasy.

It’s Alex, with some news and books for you…but since there aren’t many new releases today (December is a barren place when it comes to new books), I’m doing something a bit different this week: focusing on standalone novels that were released this year.

(Standalones make really great gifts for people you might be trying to tempt into reading more science fiction. Just saying.)

Disclaimer: These are standalones to the best of my knowledge and ability to google. If I’m wrong, mea culpa.

“Two time-traveling agents from warring futures, working their way through the past, begin to exchange letters—and fall in love.”

“How do you save the world from monsters if no one will admit they exist?“

The Raven Tower by Ann Leckie

The kingdom of Iraden is protected by the god known as the Raven, whose tower conceals a dark history.

Complicated sibling relationships, alchemy, and godhood. The world is in a lot of trouble.

The descendants of pregnant African women who were thrown overboard from slave ships live deep under the ocean, forgetting their traumatic memories by giving them to their historian, Yetu.

A family drama on a farm seated over Orme, a buried, ancient dragon who dreams of resentment, jealousy, and death.

A young woman in the jazz age dreams of escaping a life of domestic drudgery until she accidentally frees the Mayan god of death and is handed a life or death quest.

A teen guru who wants to advise the galaxy’s one percenters wins a fabulous free dinner at the Sol Majestic.

Seske, a young woman unexpectedly thrust into the role of leader, must find answers to tremors disturbing the new vacuum-breathing space beast her clan has moved into—while fending off a challenge by her confident, cunning sister.

January, the ward of a wealthy hunter of arcane artifacts, finds a book in his mansion that promises adventures in other worlds and truths about her own.

“David Mogo, demigod and godhunter, has one task: capture two of the most powerful gods in the city and deliver them to the wizard gangster Lukmon Ajala.” 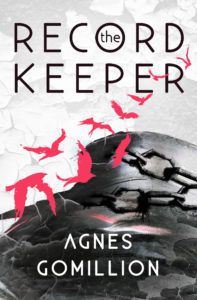 The Record Keeper by Agnes Gomillion

In a world brought to ruins by a third world war, Arika Cobane meets a new student who forces her to question her most deeply held beliefs: What does peace matter if innocent lives are lost to maintain it?

Sisters of the Order of Saint Rita respond to the distress call of a new colony and find themselves caught in a web of politics and corruption that runs through both the central government and the church.

Alex Stern, the only survivor of an unsolved multiple homicide, is offered a too-good-to-be-true deal: a full ride to Yale, and the only price is that she has to monitor the school’s secret societies.

Tess, from the future, has dedicated herself to shifting the past to create a safer world in her time, trying to find a way to make her edits stay while she avoids fellow travelers willing to stop her with deadly force.

Vulture makes a brave attempt to answer all our questions about the plot and universe of Cats.

The Parker Solar Probe has found some funky things in the solar wind as it goes close to the Sun.

Quiz: Which All Systems Red character are you?

Gabriel García Márquez books: A brief look at the master of magical realism

20 of the best Harry Potter earrings