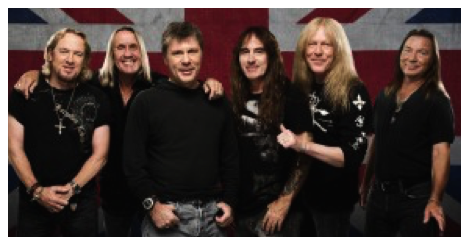 Forty years after the band first formed in East London, heavy metal band Iron Maiden is one of the biggest bands in the world. Iron Maiden is currently touring the world behind their latest album, Book of Souls. The album title points to one of the many reasons why I am a fan of the band–when looking for inspiration to their songs, they turn to literature. In fact, listening through the Iron Maiden catalog is like listening to the Western literary canon set to music.

So while lead singer Bruce Dickinson flies the band across the globe on his jumbo jet pilot license, let’s take a closer look at some of Iron Maiden’s songs that are inspired by literature.

Arguably the most popular Iron Maiden song to be inspired a literary work is “The Trooper” from their album Piece of Mind (1983). The song is based on Alfred Lord Tennyson’s poem “Charge of the Light Brigade,” which in turn is based on a disastrous British attempt to charge Russian enemy troops during the Crimean War (1853–1856).

You can listen to Alfred Lord Tennyson reading the poem himself, recorded on an Edison wax cylinder in 1890, here.

In Reading Color Newsletter
A weekly newsletter focusing on literature by and about people of color!
Thank you for signing up! Keep an eye on your inbox.
By signing up you agree to our terms of use
[youtube]https://www.youtube.com/watch?v=E8gsH–0RzA[/youtube]

Samuel Taylor Coleridge wrote his poem “The Rime of the Ancient Mariner” in 1834. Little did he know that his poem would go on to inspire a song by Iron Maiden. The Iron Maiden rendition of the poem can be found on their album Powerslave (1984). The song is 13 minutes and 42 seconds long and uses actual lines from the poem as song lyrics. Enjoy!

Iron Maiden not only reads nineteenth-century poetry and short stories. They also read science fiction. Their song “To Tame a Land,” also featured on the album Piece of Mind, is based on Frank Herbert’s classic novel Dune.

To finish off I would like to include the Iron Maiden song “Sign of the Cross” from their album The X Factor (1995). “Sign of the Cross” is based on the novel The Name of the Rose by Umberto Eco, Italian author and medievalist who recently passed away.

This run-down of songs is far from complete. Which Iron Maiden songs inspired by literature would you like to include in your list?