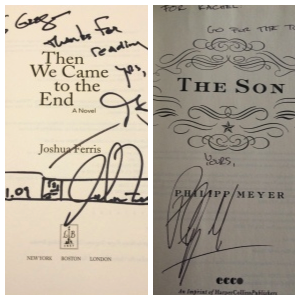 Over a year ago, Becky posted a great collection of autographed books from fellow Rioters. But it’s been twelve months, which means more books and more opportunities for authors to sign them. Here are a few more, starting with my own! The story behind this was that I didn’t actually attend the signing (because I’m a terrible friend!). I had talked about going with a friend of mine, but completely spaced when it came time to buy tickets. When my friend texted me, asking where I was sitting at the event, I told her I didn’t make it. She was nice enough to get me a copy of David Sedaris’ Let’s Explore Diabetes with Owls, and it came with one of his trademark insulting autographs.

Of course, I was elated to be insulted by David Sedaris, but when I posed the picture on social media, concerned family members wanted to know just who this David character was and why he was getting “fresh” with me. Greg Zimmerman: Joshua Ferris traces his pen on everyone’s book. I don’t know why and he wouldn’t tell me when I asked him. Jonathan Tropper’s “nice to meet you” strikes me as hilarious because it’s so mundane for how funny he actually is both in person and in his novels. Rachel Manwill: I had a whole conversation about not reading enough Russian authors with Philipp Meyer, hence the Tolstoy comment.

I went to the Brooklyn book launch of The Vacationers over the summer, and I’d been intending to go to a class at my gym after work. I tweeted Straub earlier in the day about my conflict and she tweeted back that her book party would be better because cookies. Obviously it was better than the gym. Johann Thorsson: It’s a book Chuck Wendig signed for me at BEA…or actually for me by proxy since Cassandra got it signed for me. She then said something about having to get it to Iceland somehow (I live in Iceland) and a friend of Chuck’s was standing there and said, “I’m going to Iceland next week, I’ll give it to him.” A couple of weeks later I met Chuck’s friend at a pub and he handed me the book.

And the thing Chuck wrote in it… “Hell will meet your precious Iceland!”

Now, of course, we want to hear all about your collections! Treasured quotes, silly drawings, whatever authors have scribbled on your book’s pages. Pictures are always encouraged! So leave a comment or send us a tweet.