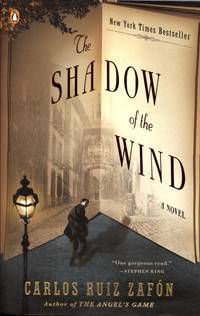 I was recommended The Shadow of the Wind by Carlos Ruiz Zafón by people I trust. As soon as I read the blurb on the back of the book, I felt like I would love reading it: a book about forgotten books and a mystery! A book about Barcelona! Sounds like the kind of book I would be glued to for hours and crave for the next in the series like candy.

Unfortunately, all I managed to do was finish The Shadow of the Wind without throwing it against the wall in rage and annoyance. To the contrary of what some Goodreads discussions would tell you, this book is extremely sexist to the point of tediousness: like, it’s so unimaginatively sexist and predictable that I am actually surprised at how famous and acclaimed this book and series are. Many people in the discussion I’ve just linked to say that sexism in this book was inevitable because it’s set in the 1940s and 1950s but I would like to, politely, call bullshit on that. (Warning: Spoilers from this point on)

There are plenty of novels set in that period that aren’t sexist in the way The Shadow of the Wind is. The female characters were one-dimensional plot devices who don’t care about anything other than the men they’ve fallen in love with. I don’t dispute that a historical fiction novel has to uphold some kind of realism in how women were treated in that period, but this book was published in 2001 and Zafón’s contempt for women and his sadistic insistence on women being raped and beaten because they had consensual sex with men was persistent throughout the story. It isn’t just that the women in this book were treated badly, but that Zafón seems to imply they deserved the treatment they got.

The story in general is quite interesting, but the female characters and their plight have completely turned me off the whole series. Let’s start with Clara Barceló and the terms in which she is sexualized by the main character. Barceló is a blind woman for whom the main character, Daniel Sempere (who is ten years her junior), develops a crush while he reads books out to her over the span of several years. This ends when Daniel catches Clara having sex with her piano instructor because he is so enraged that she would dare have sex with someone who isn’t him. When we are introduced to Clara, Zafón goes on and on about how beautiful she is but the reader barely gets a sense of who she is – unfortunately, she is only a decorative beauty. And then, when she decided to do something for herself (have sex with a man she presumably likes) the main character feels dejected even though it was pretty clear that she wasn’t interested in someone who is 10 years her junior.

Then, at the end of the book, the main character mentions that Clara’s marriage to a billionaire did not last and that her beauty is now fading (THE HORROR!). There was a bit of an implication that she somehow deserved this fate because she had rejected the main character earlier in the story.

I understand the drama of rejection (and retribution) Zafón is trying to create here. I get it. But basically, it just makes me think Zafón is one of those dudes who would become irrationally aggressive after being rejected on Tinder.

Clara Barceló is only one example of the empty-shelled women Zafón created who were punished for being deviant in some way and I have to come out and say it: this is why I have decided not to continue reading this series.

Of course, it is beautifully written. Of course, the story line is extremely interesting and keeps you at the edge of your seat. Of course, I appreciate Zafón’s beautiful descriptions of Barcelona. Of course, it’s an extremely critically acclaimed book. But what use is that if every time a woman is mentioned I feel like I am reading about what the author wishes women were like and not how women are actually like? And when one of the female characters does something un-ladylike, the suffering they receive is described with glee and/or satisfaction?

I found that this sexism clashed so much with the story Zafón was trying to tell that it often took my mind off the actual book. It wasn’t just a mere annoyance: it was something so obvious that it destroyed the escapism books usually provide me with. I’ll stick to books that give me real female characters and that don’t use them as plot devices.