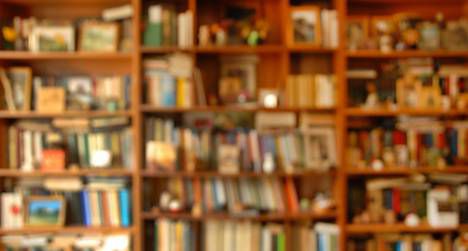 There’s been a cultural meme going around for the past few years that we should all aspire to live a minimalistic life, our possessions curated down to as few essentials as possible. In literary circles this has culminated in dozens of articles espousing carefully curated bookshelves organized by color or, in the most extreme cases, books being “released back into the world” like small songbirds with mended wings.

When I was 27 years old I left New York City. I sold almost everything I owned (not as much as you’d think), took the money and drove across the country. Before leaving I hauled five boxes to the used bookstore in the town where I’d grown up. The owner, who’d known me since I was 14, handed a small stack of books back to me with my money.  I know you’re all about divesting yourself of your worldly possessions right now, she told me (I’d been buying a lot of Buddhism books off her shelves), but you’ll regret getting rid of these. I took her advice and am looking at those books as I type this.

It’s *cough* years later and I’m still trying to shed all those pesky worldly possessions. I’ve gotten pretty good at it.  I have an ereader. I bought The Life-Changing Magic of Tidying Up and spent months putting my house in order, shredded garbage bags full of paper and made a dozen trips to GoodWill. I even got rid of some books. But the bulk of my library remains and continues to grow. I could give you a hundred of reasons why I keep books – that they are tangible objects representing who I am, they hold my history, they make a house a home, etc.,… but the truth is I just like books.

Jacques Bonnet (owner of 40,000+ books) gets this. His descriptions of his own “working library” is inspirational – “the kind where you don’t hesitate to write on your books, or read them in the bath; a library that results from keeping everything you have ever read – including paperbacks and perhaps several editions of the same title – as well as the ones you mean to read one day. A non-specialist library, or rather one specialized in so many areas that it becomes a general one.”  A library that is both loved and used – isn’t that what most book lovers want? If you’re thinking of getting rid of your books, I strongly advise reading his book Phantoms on the Bookshelves before doing anything drastic.

And physical books do have value outside of the personal. Right around the time I decided to leave New York I received a Christie’s Auction House catalog of Modern First Editions: The Collection of Peter Apap Bologna.  It contained the contents of a private library worth an estimated one hundred and sixty-five thousand dollars. Rare books selling for a lot of money aren’t all that unusual, but these weren’t Guttenberg bibles, medieval manuscripts or even first editions of Tom Sawyer. Flipping through the catalog I discovered Mr. Apap Bologna and I read many of the same authors: Patrick O’Brien, Iris Murdoch, Esther Freud, Kazuo Ishiguro, and Martin Amis. What made his collection special and valuable was its quantity, its quality, and something more elusive. The catalog attempted to explain what that was: “The past, the present and the future. Which is what collecting books is, essentially all about. The Bologna Collection is social and literary history. It is, above all, an astonishing, and delectable, distillation of careful, sometimes properly eccentric, choice.”  I’ve come to view each of my books as an investment in the potential of the author. My library is a literary portfolio, not as lucrative as the stock market for sure, but one I hope will return more works by the same men and women whose promise I recognized.

I’ve spent my life building a library that achieves a happy median between those two collections. The idea of dismantling it seems absolutely ridiculous to me. No one has yet to give me a truly good reason why I should feel otherwise. What about you?