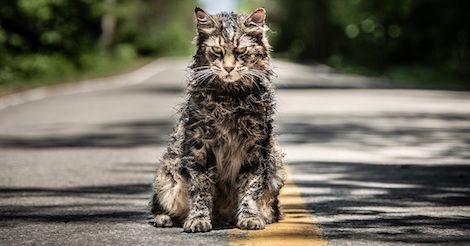 You in a safe place, fam? Doors locked? Lights on? Something sharp at the ready?

You’re still not ready for the second Pet Sematary trailer.

Except for one key thing. Taken at face value, it seems that Ellie is the one to be hit by the semi and come back “wrong.” The trailer also makes it seem like it happens as soon as Church comes back, but I know that’s a bit of jump-cut tomfoolery.

This trailer, unlike the first, takes us a bit deeper into the mythology of the titular cursed burial ground. We also get a lot more jump scares and slashy bits. The scene of John Lithgow’s Jud Crandall on the stairs, especially, is straight out of the book and makes me scream just as much now as when I first read it over 35 years ago.

There are some extra-creepy body-horror bits as well, with fingers cracking and backs deforming in that oh-so-visceral way that’s hard to just imagine. Even watching this with your eyes closed won’t help, as the foley work on the trailer is top-notch.

The one problem (?) with the second trailer is that it’s pretty clear how the entire thing is going to play out. Which, when you’re talking about a 36-year-old book that’s already been adapted for screen once, I’m not sure is the biggest concern.

What you need to be worried about is if you can stand keeping your eyes open for the whole thing. Rewatch the trailer a few times and attempt to prepare yourself.

Pet Semetary is scheduled for release on April 9, 2019.