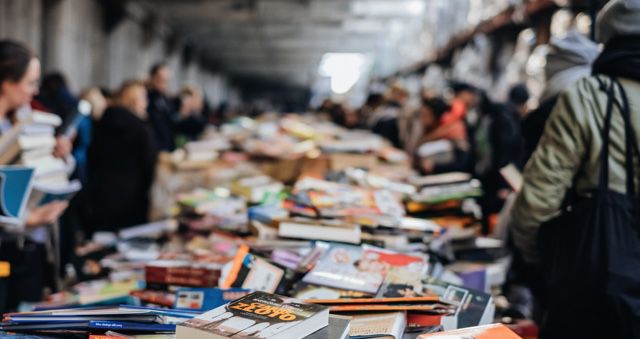 For many students in the United States, the new school year has just begun. And consequently, those of us who have, unfortunately, aged out of school, might be hit with a jolt of envy. Kids these days, they don’t know how good they’ve got it, with their Book It and their discovering of children’s classics. But, really, what can beat the excitement and magic of the Scholastic Book Fair? From the impressive displays to the variety not only of books but activity kits and more, the Scholastic Book Fairs were—and continue to be—something to behold.

Some of us still remember the smells of the fairs. Though they were put up in familiar settings—often a school cafeteria, gymnasium, or library—the arrival of the Scholastic Book Fair felt, in a word, novel. If you were lucky, perhaps your caretakers sent you off to school with some pocket money. It didn’t take much to come home with a respectable book haul. Paperbacks were nearly for the taking and if you didn’t have cash on hand, you could be sure you’d at least bring a catalog home with you, with a neat little ordering form.

According to the Scholastic website, the Scholastic Book Fair reportedly holds 120,000 fairs annually, which help to fund hosting schools with an impressive amount of revenue. The Scholastic Book Fair is a crucial effort in book deserts and helps to provide access to books. Today, books can be ordered through the old school paper catalog or online (a lifesaver for teachers looking to avoid the administrative challenges of collecting funds and submitting orders).

When Marina Koren of The Atlantic visited a Scholastic Book Fair in 2018, she found herself a bit underwhelmed. “I felt a pit of disappointment in my stomach. Memories are notoriously malleable, and my recollection of Scholastic book fairs had become warped over the years.” Ah, childhood memories. How unreliable they are.

Despite the risk revisiting Scholastic Book Fairs poses, it hasn’t stopped many adults from daydreaming about crisp new paperbacks and towering, self-standing cardboard cutouts of our favorite literary heroes and heroines.

Someone should do a pop-up Scholastic Book Fair.

So if you’re missing giant of stacks of cheap books, colors galore, and tchotchkes like scented pencils, dancing bullet-shaped magnets, and plushes of Clifford the Big Red Dog, you’re not alone.

What is it about Scholastic Book Fairs that make us sigh so? That it broke up an otherwise monotonous school year with color and excitement? That for one day or so of the year, it wasn’t just that one kid who was excited about books, but everyone—because, really, who could deny the allure of all those shiny new stories?

For that small period of the school year, we were brought together under a love of books and reading (or at least really cool knickknacks we’d never be allowed to purchase under rational adult supervision—honestly, who needs a pointer shaped like a hand that you’ll no doubt later use to mime picking your nose?)

The good news is, the Scholastic Book Fair is still going strong. While for many of us, it’s merely a dream we once had, some of us still may sneak in in the form of volunteer caregivers. I’d like to think the world is a safe enough place that schools could just allow randos in off the street in for a stroll through the wonder that is the Scholastic Book Fair. But unfortunately, that’s not our reality.

At the end of the day, I guess we all just better pile in the car and head to Costco.

god damn it…. is costco really the adult version of the scholastic book fair or what pic.twitter.com/G69gbiMDou