Every year on Passover, Jewish families all over the world gather ’round to celebrate and commemorate the Exodus from Egypt. At the center of this annual celebration is taking turns reading from a book called a haggadah. The word “haggadah” comes from the Hebrew root HGD, which means “to tell,” which is exactly the purpose of the Passover celebration—to tell the story of the Jews’ liberation from slavery in Egypt, also known as the Exodus.

Because haggadot are not considered holy texts, but rather instructional materials, over time they have developed into beautiful artifacts of book art. And nowhere were such beautiful haggadots made as in the Spanish city of Barcelona during the Middle Ages. And of these Barcelona haggadots, few can compare to the wonder and splendor of a book today known as the Sarajevo Haggadah.

Here are ten things you need to know about the Sarajevo Haggadah.

Sarajevo Haggadah (Wikipedia). Notice the wine stains and hand-written commentaries, indicating the haggadah having been in extensive use during Passover celebrations.

3) The Sarajevo Haggadah is divided into three parts. The first part consists of 34 pages with a total of 69 illuminated miniatures depicting Biblical events from the Creation to slavery in Egypt to the succession of Joshua after the death of Moses. The second part consists of 50 pages with the text that is read out loud during Passover, written in medieval Sephardic script. The third part contains poetry by the most prominent Jewish poets of the Middle Ages.

4) The Sarajevo Haggadah was made in Barcelona around the year 1350. It left Spain in 1492 after the Expulsion of the Jews, and surfaced again in Italy in the 17th century. It got its name when it was sold in 1894 to the National Museum of Sarajevo by a man named Joseph Kohen. How and when the haggadah made its way from Italy to Sarajevo in Bosnia is not known.

5) Stains from wine and idle hand-doodles on several of the pages show that the Sarajevo Haggadah has been used extensively throughout the years.

6) Brought to Venice by Jewish refugees, there is a notation from 1609 made on the final page of the haggadah by Giovanni Domenico Vistorini of the Italian Inquisition. The Inquisitor certifies with his signature that the Sarajevo Haggadah does not contain any heretic materials, and therefore, it escaped being burned during the recurring public burnings of Jewish books. 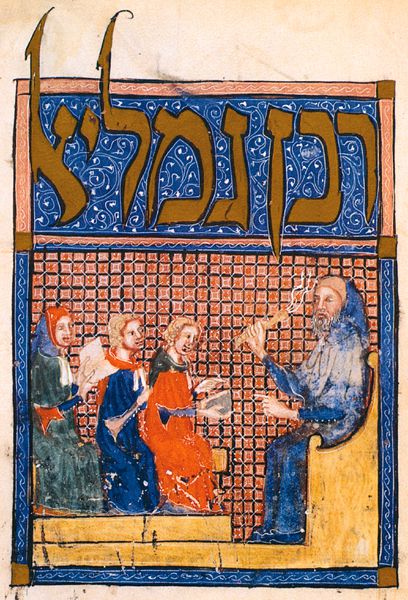 7) The illuminations in the Sarajevo Haggadah show both Christian and Islamic influences. The pigments on the pages are made from lapis lazuli, azurite, and malachite. The illuminations are decorated using gold, silver, and copper leaf. The names of the artist and the scribe are unknown.

8) The exact name of who commissioned the Sarajevo Haggadah is not known; however, the haggadah could have been a wedding present when two members of the Shoshan and Eleazar families got married. The reason behind this theory are the coats-of-arms of these two families displayed side by side on the same page as the coat-of-arms of the city of Barcelona.

9) Even though we don’t know for sure who commissioned the Sarajevo Haggadah, it is believed that the members of the family who financed it can be seen sitting around a table in the haggadah itself. In this image, there is also an African woman, dressed in the clothes of a prosperous Sephardic Jew and holding a piece of matzo, or unleavened bread. This woman could be a family member, or a Jewish acquaintance, from either Maghreb or Ethiopia. 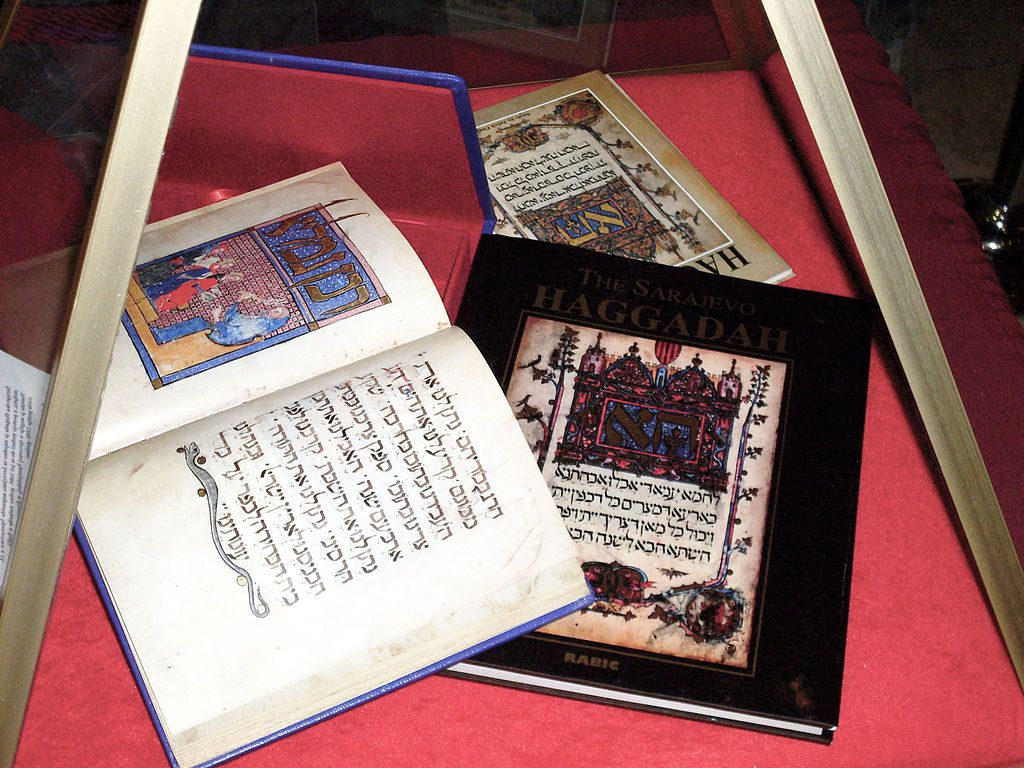 Facsimiles of the Sarajevo Haggadah at the National Museum of Bosnia and Herzegovina in Sarajevo. (Wikipedia)

If you are into historical fiction, biblio-mysteries, and books about books, the Sarajevo Haggadah is central to the story in Geraldine Brook’s best-selling novel People of the Book.

If you want to read about another amazing haggadah made in Barcelona in the middle of the 14th century, check out this previous Book Riot post on 10 Things You Need to Know about the Golden Haggadah.