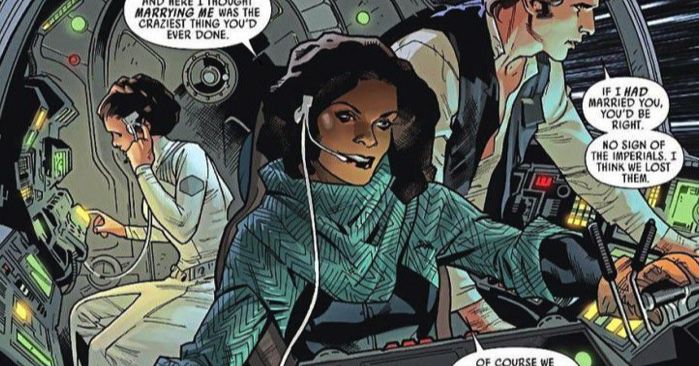 B-list heroes, however, haven’t gotten quite the same bump and I can think of a few who deserve a little love and air time. Now that we’ve covered a few of my favorite underrated Jedi, I thought y’all might want to meet one of my favorite scoundrels.

We don’t know much about Sana’s early life but for the fact she’s descended from the High Republic Era Starros Clan and she was born on the Smuggler’s Moon Nar Shadda.

Oh, and that she claims to have been married to Han Solo.

Sana first encountered the erstwhile rogue while attempting to track down the Phalynx transmitter, a much coveted object she lost at auction to Crimson Dawn (the crime syndicate even the bad guys were afraid of in Solo). Sana hired Han and his partner Chewbacca to round out her search and recovery team, promising them 50% of her cut in exchange for assistance acquiring the Phalynx. It turned out to be a bad deal all around: Han and Chewy did obtain the item, but bounty hunters chased them back to the Falcon where Sana was waiting; Han, misunderstanding Sana’s instructions, dumped the Phalynx out of an airlock.

Sana, understandably annoyed, parted ways with the duo after the disaster but never forgot the money Han had cost her. So when he popped up as a Hero of the Rebellion, she decided she was going to take the outstanding bill out of his account or his ass. Solo’s name brought all sorts of creeps out of the shadows on Tatooine, her first stop, including a group of Rodians looking to pick up a blood price on Greedo; bummer for them. She then picked Solo’s trail up in the Outer Rim where she found him sheltering from a squadron of Tie Fighters on a planet in the Monsura Nebula, electrical storms protecting his stolen Imperial shuttle from the fighters’ limited navigational capacities. After a hasty, and unpleasant reunion, Sana and Han’s mission partner, Leia, introduced themselves to one another, Sana very specifically giving her name as Sana Solo and claiming to be Han’s wife. Sana, realizing Leia’s importance to the Rebellion by the size of the bounty on her, called for her own backup to destroy Han and Leia’s shuttle and signaled the Imperials who sent a Star Destroyer to retrieve the princess. After a last minute change of heart, however, Sana brought Leia and Han aboard her ship and helped them escape.

She also agreed to help Leia and Han rescue Luke from Grakkus the hut. Provided she received her husband in payment. Leia agreed to the fee, though after she saved Sana’s life the latter revealed she and Han had only pretended to be married for the Phalynx heist and renegotiated for payment in credits.

Leia and Sana next partnered to assist in transporting rogue archeologist and sometimes Vader fangirl Doctor Aphra to Sunspot prison, with Sana taking the stance that the Rebels were a bit too gentle with their captives. She did help Leia protect the prisoners when Sunspot was attacked by mercenaries despite agreeing ideologically with the mercenaries, and even loaned Aphra one of her guns after a droid attack. The two continued to bicker as the team fought its way to the control room and contained the threat, especially when Aphra attempted to reprogram a droid that was attacking Sana rather than shooting it. The trio went to rendezvous with Han and Luke for extraction only to discover that the boys had (shockingly) been taken hostage by the lead mercenary, who demanded Aphra be killed. Leia refused; Sana willingly put a gun to the prisoner’s head.

Saga hero R2D2 cut the gravity and power, saving everyone’s asses as always. In the ensuing chaos, Sana and Aphra decided to just go at it and see who could kick whose ass; the fight ended with Sana, Aphra, and Leia overpowering the lead mercenary, allowing Rebel forces to take the prison and Aphra to do a runner. Leia caught up to her and tried to convince her Vader was literally the worst news ever. Sana showed up, shoved Aphra into an escape pod, and launched her into the void.

Despite her protestations of wanting to stay away from the Rebellion, Sana worked with the group several more times: she assisted them in taking the Star Destroyer Harbinger, worked with Lando to double cross the Empire for 20,000 credits, granted Hera Syndulla’s request to get Aphra out of yet another jam, and helped Han find a lost Millennium Falcon.

Sana Starros knows how to hold a grudge, but one could make the argument that’s a sign of her determination and refusal to give up once she has a goal firmly in place. She has no qualms about killing when necessary but, then again, neither did Cassian Andor and look what he got done. Sana may not always do things the right way but she does tend toward the right thing. Most of the time. Okay, like 60% of the time. And if she likes you, she’s definitely not a bad person to have on your side.