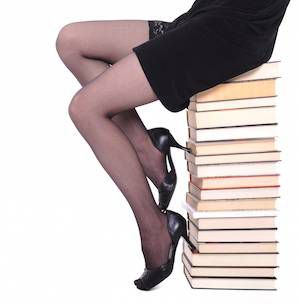 For Maya Banks, I feel like there is no middle ground. She has two erotica series that I’ve read, the Breathless Trilogy and her Sweet series, though I liked the first book of the former better than the latter. The hero is a very wealthy man, though I caution readers to be careful with any Christian Grey parallels. It’s also more BDSM-lite. Your Crystal Light to your Kool-Aid. Of course, the hero starts out as a bit of an overbearing jerk, but that’s nothing new to romances of any genre, but he grows and changes. He even spoons, and who doesn’t love a bit of spooning after their bondage?

The Theory of Attraction by Delphine Dryden

Like the rest of the installments in her Science of Temptation series, The Theory of Attraction features smart people doing hot things. For those who prefer just a dash of BDSM in their romances rather than a heaping spoonful, this book shines in terms of characterization. While brooding, angsty heroes or heroines with a tragic past are salacious enough to keep the pages turning, it’s also nice to see intelligent, well-adjusted people getting their own happily ever afters. And, when it comes to bedroom activity, it’s refreshing to see our couple in their respective roles in such a way that augment their personalities. The hero is more than the cold, dominant stereotype and the heroine eschews the wilting, submissive undertones of Ana Steele.

With the genre receiving such attention, I know I’ve left off some great examples and authors. Feel free to chime in with some more!