The Good Girl and The Other Mrs. by Mary Kubica, from Park Row Books 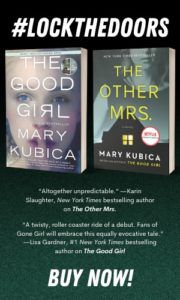 Two addictive reads for fans of twisty psychological thrill-rides from New York Times bestselling author Mary Kubica. The Good Girl: What seems like a safe one-night stand turns out to be the worst mistake of Mia Dennett’s life. A tautly written, compulsive read that reveals how even in the perfect family, nothing is as it seems… The Other Mrs.: Meet Sadie and Will Foust, the new couple in town. When their neighbor is murdered, Sadie is drawn deeper into the mystery, but the more she discovers the more she realizes how much she has to lose. #LockTheDoors

Family secrets, espionage, serial killers, psychological suspense: there’s a whole wide world of thrillers out there and we’re just trying to read them all! Many of us have go-to writers whose work we’ve come to rely on, but we here at Book Riot are always looking for new (or new-to-us) authors finding new ways to keep us at the edge of our seats. That’s why we asked you what authors you think thriller readers should know! Here are 35 of your favorites, from YA to adult and writers both established and newer to the scene.