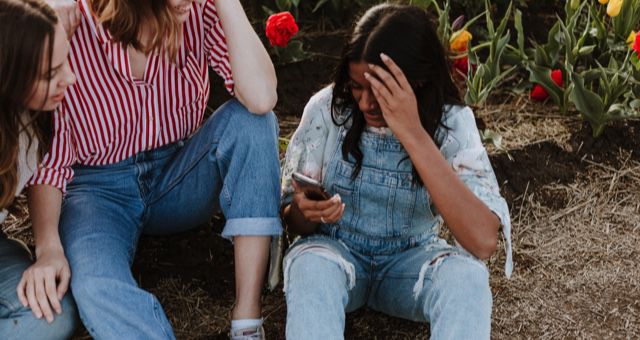 I can still remember the day I bought the original version of Dr. Mary Pipher’s Reviving Ophelia: Saving the Selves of Adolescent Girls. I was 14 years old, my parents were divorcing, and I stumbled across the book in my local bookstore. I had just started seeing a therapist because of the impending divorce, and I wanted to read about what it was like on the “other side of the couch,” so to speak. I was less than halfway through it when I decided that I wanted to be a clinical psychologist, just like Dr. Pipher. She brought her clients to life with her sensitive, vivid writing, and provided a lens into therapy and really captured the essence of human connection. I must have reread that book at least 20 times during high school, envisioning my own therapy practice in the future. Imagine my surprise when I found out there was a new, updated version of the book that was recently published. 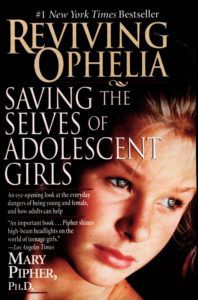 The original version of the book.

In undergrad, I did indeed major in psychology and found a Dr. Pipher of my own, of sorts. This professor was the Director of the Counseling Center when I was a freshman, and was well-known for her work with adolescents, especially adolescent girls, and college students. She was an outspoken and brilliant feminist. She later joined the psychology faculty, and except for her time at Semester at Sea, she and I worked together every semester of my undergraduate career. I took her classes, worked on independent studies with her, and she became my psychology mentor. She was also a writer, and we would talk about literature, books, writing, and the arts. She and I talked about Reviving Ophelia and I often returned to the book whenever I wondered whether I still really wanted to pursue a career in psychology.

After college, I went right into a clinical psychology doctoral program, where I quickly realized that my Rogerian/Jungian/May leanings weren’t exactly suited to the particular program I was in. I left that program and earned my MS in clinical health psychology, which I later parlayed into public health work. Through it all, Reviving Ophelia has stuck with me. The way I remember it, the 1990s were bursting with feminist research and books: Peggy Orenstein, Joan Jacobs Brumberg, Inga Muscio, Andrea Dworkin, Mary Pipher—and adolescent girls were the focus. Pipher gave voices to these girls, she gave the reader a glimpse into what they brought to her offices, and then generalized aspects of it to the larger population with compassion and insight.

In the original book, Pipher called our society a “girl-poisoning culture.” In many ways, she was correct. Now? Many of us who read her book as teens now have children of our own—and this new generation of girls is more likely to become depressed, suicidal, or anxious than we were. So what the hell happened? 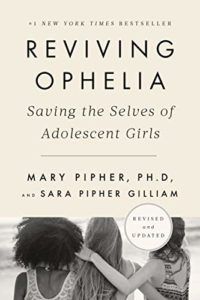 The new version of Reviving Ophelia: Saving the Selves of Adolescent Girls looks at just that question. In this new version, Dr. Pipher is joined by her daughter, Sara Pipher Gilliam, who, like myself, was a teenager when the original book was published. The new revised and updated version of the book addresses a major change: the digital and social media revolution. I know, I know—it’s easy to say, Look! It’s the damn iPhones and the Facebook and the Internet!—but she makes lots of good points backed up with research about how social media has had yes, some positive effects, but also a lot of negative effects on adolescent girls. While that’s a small part of the discussion, it’s a vital one. She keeps some original stories from the book, but also interviews new, more diverse groups of girls and has added new stories.

Reading this as an adult, as a parent, has been a much different experience than reading it as a teenager or college student. In some ways, opening this book was like starting up a conversation with an old friend that had dropped ages ago but was picked right back up as if no time passed at all. In other ways, reading it was like being slapped in the face with the reality of just how different things are now than they were 25 years ago, despite many constants. I only have a son, who is a toddler, so I also imagine that I’d be reading this differently if I had a daughter, especially a teenage daughter.

Twenty-five years ago, Reviving Ophelia was a groundbreaking book. It brought voices to issues previously unspoken, it spotlighted how society and culture harmed girls in many ways, it started necessary cultural conversations, and in some respects, it was a call to arms for therapists, parents, and teachers. That psychology professor of mine that I mentioned earlier? She died three years ago from breast cancer, and I can’t help but think she’d be so interested in the new version of this book—maybe even add it to her Psychology of Women syllabus. I wish she were here to read it; I’d love to hear her thoughts on it. The book is still relevant, especially in our current political and social climate. Our own president has clearly expressed his disdain for certain women and his emphasis on how their bodies and faces look (including insulting other presidential candidates’ wives’ looks and daily insults about other peoples’ looks on Twitter), and a generation of young girls heard him say that when you’re a star, you can do anything, including grab women by the p*ssy. The consequences of all of this? Elected to the highest office of the country.