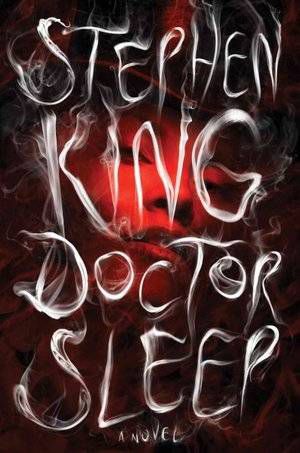 Publisher’s Synopsis: “Stephen King returns to the characters and territory of one of his most popular novels ever, The Shining, in this instantly riveting novel about the now middle-aged Dan Torrance (the boy protagonist of The Shining) and the very special twelve-year-old girl he must save from a tribe of murderous paranormals.

Then Dan meets the evanescent Abra Stone, and it is her spectacular gift, the brightest shining ever seen, that reignites Dan’s own demons and summons him to a battle for Abra’s soul and survival. This is an epic war between good and evil, a gory, glorious story that will thrill the millions of devoted readers of The Shining and satisfy anyone new to the territory of this icon in the King canon.”

From NPR review by Alan Cheuse

“I could hardly find the courage to turn the page. Almost 40 years later, I’ve changed, the world has changed, the planet has changed — and Stephen King is still scaring the hell out of me.”

From Esquire review by Chris Jones

“So Doctor Sleep reads more like a love story than a ghost story, as beautiful as a book that’s littered with dead children can be.”

“But here’s the true shock about Doctor Sleep: It’s not very scary.”

From The New York Times review by Janet Maslin

“And the steam of those who Shine is one of Mr. King’s best surreal inventions. He remains amazingly resourceful. He’s so good at scaring that he can even raise goose bumps when he writes about the measles.”

“And it’s scary enough to match the first book, though not better or scarier.”

From Vulture’s review by Kathryn Schulz

” What a strange and interesting book Stephen King has given us: a work of horror that promises, of all things, a good night’s sleep.”

“Eventually, also, Doctor Sleep will get good. In the meantime, though, we must suffer Dick Hallorann waxing Afro-­avuncular, a favorite move in the King playbook.”