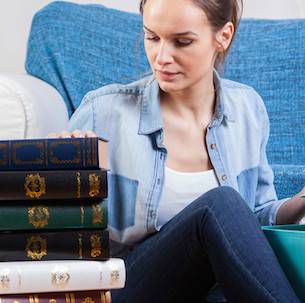 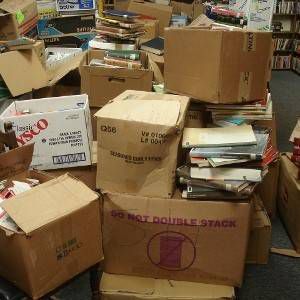 Last month, I bought my first house. Yes, I am a full fledged grown-up now. Yes, I know that adults don’t use the word “grown-up.” Moving into this house was a big deal for me on several levels. One being that I had been separated from my books for over two and a half years. I couldn’t remember all that I had. Or worse, occasionally, I’d hear people discussing a book that I know I had bought a few years ago but that was in a box in a storage unit somewhere that I hadn’t had the chance to read before it was packed up. I couldn’t bring myself to buy another copy. I’m a teacher, I can’t afford to buy luxuries like multiple copies of books or fancy gel pens. Next, you’re going to suggest I don’t pack my lunch, buy coffee by the cup, or eat more than cereal for dinner. I don’t know what kind of burn-money-during-breaks job you have, but I have to buy my own post-its for work. I considered the library to catch up on my purchased but unattainable books. But, I couldn’t do it. I wanted the copy sitting on my shelf to be the one that I spent hours with. It felt like cheating on them.

Finally, after years of waiting and hours of daydreaming, my books and I were reunited. I rushed to unpack them right after finding the coffee pot and a bath towel. (Unfortunately, I didn’t think about locating the bath towel until I had already gotten in my new shower post-move.) I had four large boxes of books. Huh. I thought I had more than that. I opened the first one and was reunited with some of my textbooks from college: The History of the English Language, An Anthology of Short Fiction, Frankenstein. I missed you, my lovelies. I’m not going to read you again any time soon, but I like having read you and the way you look on my bookcase.

Under the next layer of paper, O’s Big Book of Happiness stared up at me. What kind of person was I that I felt inclined, nay, the need, to buy Oprah’s book? Not only her book, but her BIG book? I put it to the side and kept unpacking. I found my small collection of Jill Mansell novels I got addicted to while living in Europe. The pretty spines complementing each other on the shelf. Next were some of the short story collections I got into for a time: Neil Gaiman and Simon Van Booy. All things that make me feel good about myself as a reader.

In box number two, I was greeted with a layer of Christian devotional books on marriage. The Love Dare and Devotions for a Sacred Marriage stared up at me. Seeing as my divorce was finalized seven months ago, I decided to put The Power of a Praying Wife in the donate pile. It was hard flipping through and seeing all the highlighted sections. I spent hours with this book while my ex-husband was deployed to Afghanistan. Pages were dog-eared, and I had written notes in the margins. I moved it to a third, yet-to-be-determined pile.

Under those was the Twilight series. I unironically love Twilight. I love the angst and the too beautiful characters and the convenient exceptions to the supernatural rules. But, I was torn about whether or not to display them on my shelves. I plan on entertaining eventually, when I have more boxes open than unopened, and a few pictures on the wall. Will the shiny black blemish of the Twilight series on my bookcase be what draws my visitors’ eyes? Or will they instead be drawn to the number, and abundant colors, of my collection of Fangirl?

I set the three books in front of me on the floor. I decided to display them, but not side by side. I don’t want to change who I am for imaginary judgmental guests. I don’t want my bookcase to be a source of anxiety either. Maybe as I start decorating, I’ll move them together, have one of those cool color coded displays. For now, it’s enough to be reunited, overrun with emotion, and to add some forgotten titles to my reread list. I wait to unpack the last two boxes, and instead start to arrange the kitchen. My heart slows down and the memories of when and where these books and I were last together get pushed to a part of my brain behind the best place to put my microplane grater.