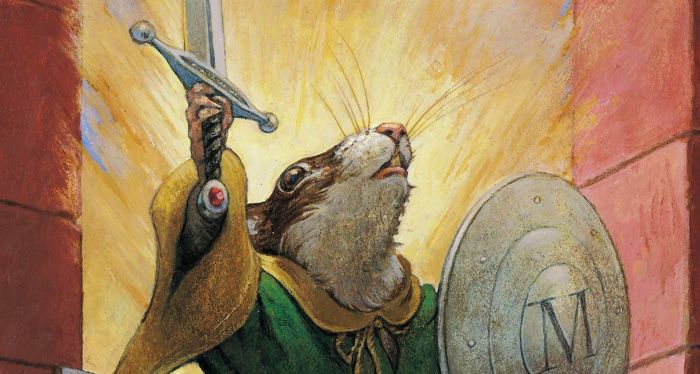 Part of what made me start to fall out of love with the series was my frustration at what the girl characters didn’t get to do. I remember being so excited when Mariel of Redwall came out (the first of the books I bought in hardcover) because she looked like a proper badass lady from the outset. I was then intensely disappointed when Mariel wasn’t entrusted with Martin’s sword and it went to one of the male mouse characters. At that point, I hadn’t yet found Tamora Pierce, so to say I was desperate to see a girl get to be a “real” warrior — which obviously meant having a piece of sharp metal to sling around — is an understatement.

I grew up on fantasy books; my mother read the entire The Lord of the Rings and The Hobbit to my brother and I, followed by all of The Chronicles of Narnia. I’d seen Star Wars. I might not have been able to name it as a trope at that point, but I was well aware that acquiring an awesome sword legitimized a character as a Real Hero, and just as aware that girls rarely, if ever, got to have one.

The first several books of Redwall also made me notice another trope that was a staple of the epic fantasy I grew up with: some kinds of people, be they orcs or weasels, are just always evil. It didn’t bother me so much during my first journey through The Lord of the Rings, probably because orcs and goblins were depicted on the page as indisputably gross and scary. It started really bugging me in Redwall because I happened to like foxes and wildcats, and it felt very unfair. Particularly because it wasn’t the biological realities of what foxes and wildcats eat that dictated their villainy in Brian Jacques’s books. If we’d seen Slagar in Mattimeo or Tsarmina in Mossflower actually eat one of the hapless mice, that would have been one thing. But instead, they were always power-grasping, thieving, murderous jerks instead of being, you know, just hungry.

Because of that, I ended up writing Brian Jacques a fan letter in my best 11-year-old handwriting, in which I asked him two questions: Will a girl ever get to wield the sword of Martin the Warrior? and Do foxes always have to be evil? I’ve been tearing my house apart for hours trying to find the return note, but past me apparently put it somewhere so absolutely safe that I’ll never find it again, to my frustration. But I remember clearly that he did write a short note back, which was incredibly exciting, and that the answer itself was equally disappointing. I can paraphrase: Have you read ‘Mariel of Redwall‘? Mariel is a great warrior.

Yes, I had. And that was why I wrote to him in the first place. Mariel had been cool, yes, but not Sword-of-Martin-level cool. (He made no attempt at answering my second question that I can recall). From the perspective of a now grown-up author, I feel even more grateful that he took the time to answer me, even if it was an answer I didn’t want. I don’t know if he ever did either of those things, since I quit the series a bit over halfway through.

But I’ve been thinking about this a lot, ever since the big announcement that Netflix is going to be making a Redwall series. There’s no longer such a dearth of fantasy out there with sword-wielding women and girls (though I’m not so sure what percentage is getting optioned) but there’s still very active, ongoing conversation about how absolutely damaging and fundamentally racist the “everyone belonging to this species/race/nation has X quality” trope is. We’ve finally hit the point where Dungeons & Dragons is slowly moving away from “racial” traits (they’ve taken their first stab at it in Tasha’s Cauldron of Everything) that were built into it because that trope is so fundamental to epic fantasy. In that way, every new The Lord of the Rings or similar property — like Redwall — feels like a step backwards.

Redwall was my first lesson in liking problematic things, but that’s also what ultimately drove me away from the series — and epic fantasy as a whole, for a long time.