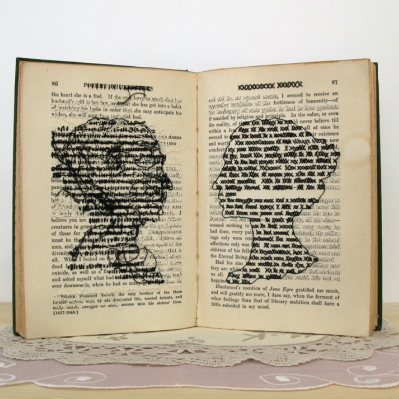 In part two of our threepete, I have a hard hard time summarizing this one because it was mostly a series of boring dialogues between characters who are boring.

Based on the “Previously on…” we’re about to get an Abraham, Sasha, and Daryl –centric episode. What does this mean for GLENN?!

The trio takes a turn and is immediately fired upon. Daryl does an epicly badass motorcycle slide to avoid getting shot. He’s not even wearing a helmet, people. Abraham and Sasha are out of the car guns blazing. I have a feeling these attackers don’t exactly know who they’re dealing with. Daryl rides his bike into winter (or an area of the forest ravaged by fire, hard to tell) and finds another unfortunate zombie biker, still helmeted, so probably very hungry from the lack of biting.

Daryl pushes his bike through the mud. I’m wondering if we’re going to get much in the way of character development here. Been a pretty bland season Daryl-wise thus far. He’s injured, his bike is busted, and he’s set upon by some other humans. He recuperates around a fire in fits and spurts. It’s shot in a first person style, so very reminiscent of the beginning of any Elder Scrolls game. The trio has bound him, and is on the move. There are lots of references to “they” and “them” because pronouns create drama. They admit to having started the fire in the forest which created all the burnt walkers and bare trees. Daryl says something mildly threatening and so dude pulls a gun on him with the question, “Am I being stupid?” Daryl says “no,” because he’s got other stuff to do.

Suddenly the trees have leaves again and they’ve arrived at a fuel company with walkers on the inside. Not a comforting sight. Plans are discussed, the youngest member of the trio intimates that it shouldn’t be all about here, which is it for some reason? The youngest one starts to faint, which gives Daryl his chance to grab rucksack and escape. After gnawing his restraints off he gets no response on the walkie from Abraham or Sasha. He pulls his bow out of the bag to end a walker and sees a cooler labeled “Insulin” thus inciting the drama of the episode, I suppose.

Abraham and Sasha track Daryl to no avail. They debate the best strategy to actually getting Daryl back: do you track the tracker or let him track you? They decide to wait it out in a house after writing “Dixon” on the door. Turns out the house belonged to a very decorated cop, which causes feelings. Sasha sleeps while Abraham rummages. There’s a lone walker locked in an office behind a glass door. Abraham really wants to end him, Sasha thinks that’s unnecessary; he poses no threat, and killing him could draw attention. They debate it for a bit, loose ends versus killing for the sake of killing. My vote is ending loose ends, but do it quietly and without malice. Their discussion is far more philosophical.

Daryl returns the insulin to the trio. In return he demands… something. In this case a small carved trinket. As he begins to leave a truck crashes through the woods demanding a return of… something. Pretty sure this is Negan, whom they’ve been hinting at for a while now. Daryl gives dude his gun back, because this situation seems serious. Daryl uses special hunting tricks to lure the goons into various walker traps somehow. They seem with it enough to cut off arms as needed. This causes them to retreat for now. The trio tells Daryl that they thought he was with the baddies, that’s the only reason they were mean. Cold comfort.

Abraham out walking around finds some RPGs and nice cigars. A good day by his standards. He then gets stupidly close to a walker to get the launcher of said RPGs. Very bad green screening ensues. Even by the typically bad logic of the show this action makes no sense. Abraham gives up and smokes a cigar while the zombie Deus Ex Machina’s himself towards handing the Abraham the launcher. Will the virtue of patience have just been learned? He returns to Sasha and hits on her pretty hard. What happened to Rosita?! Sasha doesn’t totally rebuke him. Interesting.

Daryl sticks with the trio until they get where they’re going. The diabetic’s aunt and uncle were ‘killed’ in the fire that the trio set. Diabetic (I’m really sorry for not using her name I’m just honestly not sure they ever said it) get too close and gets bit. While digging graves Daryl asks dude of the trio the three questions. He answers correctly and gets invited into Alexandria. Instead of trusting Daryl, dude pulls gun on him to get the crossbow and the motorcycle. Is this the end of Daryl?! They apologize, Daryl promises that they will be sorry for what they’ve done. Daryl finds a truck and finishes the driver. Seat belts both save your life now and make life easier for survivors in the apocalypse. The truck arrives to Abraham and Sasha. Abraham is now wearing a Union army uniform because… reasons.

Driving home, Daryl radios Rick, but instead of a response all he hears is “help.”